Sometimes when you consider all the factors that go into successfully growing food to eat, it’s amazing that it ever works and that we all aren’t starving or dying off. It comes with a price, though. We have created so many shortcuts around nature in commercial agriculture that some things we call vegetables are actually questionably healthy and downright polluted with toxins. What I’m talking about is the daily effort required by home gardeners and small farms that grow organically or with limited fertilizers or pesticides.

I’ll confess that I’ve sowed lettuce three times this spring without a single sprout. (Remember, first-time parent of an infant — it’s arrogant that I even thought I could manage this.) The first time, I used last season’s seeds that had definitely not been properly stored. That was my excuse for failure. With new seeds freshly purchased, I tried again but didn’t water as often as I should have. It’s been more than three weeks since it last rained, and that wasn’t even a significant amount. The lack of rain and unusually hot weather for the past two weeks have made caring for seeds and transplants more labor intensive, and neglecting it for even a day can cause the seeds to dry out and fail to sprout.

Back to Seed Sowing 101: Seeds need three things to release their energy and become plants — the right amount of water, the right temperature and a good location, usually in soil, although some will sprout in other mediums. Water helps dissolve the seed’s coating to let the roots come through first. Temperature signals the seed that its growing season has arrived. Soil delivers nutrients to feed the plant as it grows.

A reader recently wrote to The Paper about the importance of soil temperature and suggested that we publish a weekly guide for seed germination based on the current temperature. That would be challenging, however, because soil heat varies based on a lot of different things that are unique to your location. 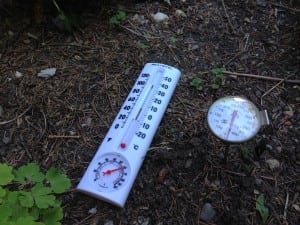 Use a soil thermometer if you’re concerned about planting at the right temperature. It should go as low as 0 degrees. Cooking thermometers won’t suffice. (Photo by P. Doan)

In Philipstown, we have many microclimates, and the topography varies from riverfront to mountaintop elevations of more than 1,000 feet with many hills and valleys in between. If you took soil temperatures around your yard, you’d probably find that there is even a variance of 5 to 10 degrees or more in different sections. It isn’t only that shady areas are cooler than sunny areas, either.

Air warms soil, and the more air that circulates in soil, the warmer it can become. That’s why trapping air close to the soil with a row cover is an effective way to extend the growing season.

Soil that allows more air in has space in it and lots of organic matter. Dense soil is cooler because it both traps water and keeps out air. Clay soils are an example of cooler soil. The texture of a sandy soil, conversely, allows in more air, drains water faster and is warmer.

The color of the soil matters, too. Dark soil absorbs more heat, and light-colored soil reflects the sun’s rays.

I usually sow lettuce after the air temperature has been above 40 degrees for a couple of weeks. I use raised beds, though, which are generally quicker to warm up than direct seeding in the ground, another factor to consider.

Vegetables break down into categories based on their germination needs and are called either cool season or warm season. Bulbs are considered to be cold hardy or tender, meaning they can stay in the ground during a typical winter in our area or must be brought in to hang out in the considerably warmer basement until spring.

Transplanting seedlings from indoors to the garden is another way to get a jump on spring planting when winter lingers, but it isn’t as easy as just poking a seed into some potting soil on a sunny windowsill. For best results, carefully follow the seed packet instructions and don’t forget to water. I’m still hoping for a lettuce harvest before summer’s heat arrives.