Wylie Thornquist draws all day long. Never without a notebook or at least a stray piece of scrap paper to turn into a canvas, she is always grasping a fine-tipped pen, colored pencil or other writing implement and creating a character or a kingdom or two.

It happens during the school day, where “there’s an unspoken agreement with my teachers that I draw” — she’s a top student, so it falls under the whatever-works-best category — and at night when she intersperses it with doing her homework, which there’s a lot of in an 11th-grade curriculum at Haldane stuffed with Advanced Placement classes. She said it relaxes her and makes the learning come more easily. 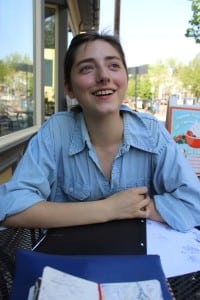 Recently Thornquist took home the honors as Overall Best in Show at the 2015 Emerging Artists Exhibition at the Putnam Arts Council. Her submission, which consisted entirely of her small crammed-with-drawings Moleskine attached with Velcro to a pedestal, was part of a delegation of three from Haldane. All of the artists were successful, with Benedicta Geithner receiving a first-place award for the school for her watercolor Tiger in the Sun and Henry Dul earning an honorable mention for his embellished block print of a tree.

Thornquist, who is apt to come out with statements like “I love vultures — my favorite!” and is captivated by things like transcendentalism — one of her drawings is a portrait of Ralph Waldo Emerson and others in his circle, is largely untrained as an artist. She participated in two art intensives as well as the mentor program at the Garrison Art Center, which paired her with adult artist Sheryl Levine, and she’s taken art every year at Haldane, but outside of that she has had no formal instruction.

She began drawing as a small child, “mostly flowers and veggies, then fairies — I’m still in my fairy kick,” she remarked. “I have so much fun with detail. As a kid I carried a million things with me, twigs, pieces of lint, very small things. Now I integrate it into my art. I still love tiny things; my room is full of them: dried flowers, bones.” 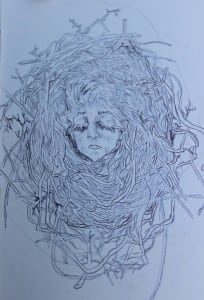 Thornquist is interested in a lot of things but has a particular bent for textile and fashion design, which she hopes to study in college, along with illustration. During her time at Haldane, she has started an extracurricular art club and co-coordinated last year’s big Fashion as Art show, which she is doing again right now, albeit on a much smaller scale.

“We’re working on a decades theme for this one. There’ll be around 10 designers creating maybe 15 pieces. We have a lot less funding, but it’s almost an advantage as it forces designers to go to thrift stores to find fabric. For example, I went to Graymoor and got this huge grab-bag full of colorful things, lots of bed sheets!” The show will take place in the second half of June at a location yet to be determined. “This year it’s student-driven, but we’re still working with Barbara Galazzo and Gallery 66 NY,” Thornquist said, “and I’m learning how hard it is to coordinate designers.”

Thornquist is also involved in another art project, this one linking several Haldane artists (the others are Cameron Henderson and Jonas Petkus) with the community in the form of creating a mural-like painting to be displayed in front of the large wooden structures that currently dominate the Foodtown windows. Working under the guidance of Haldane High School art teacher Tom Locascio, the three artists have been meeting for months, painting on a canvas in the school’s art room that will be transferred, upon completion, to the store for display. 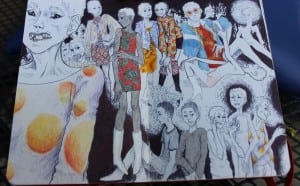 That’s where the “I love vultures” came in — Thornquist said though there is no real theme it is filled with depictions of animals and birds, with part of the background conveyed in the form of corks obtained from Riverview Restaurant.

Thornquist’s love for detail is amply evident in her drawings, which she usually does with fine-tipped ballpoint pens. Each is filled with hundreds of tiny markings, inviting the eye to linger and soak them in and prompting curiosity. 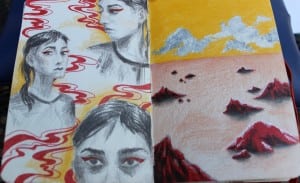 She also paints, on occasion, and experiments on fabrics. “Last year I bought a fabric marker and used it to make a print. One piece was done on a white skirt. The markings made it fray on the bottom, it disintegrated, but I decided it was ephemeral and completely fine that way,” she explained. 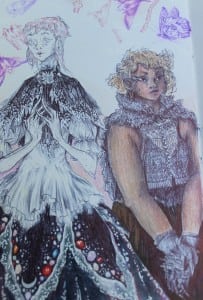 For her Garrison Art Center mentor project, she decided to turn her portraits of transcendentalists into one large portrait. “I did thumbnails of Ralph Waldo Emerson and got taken with his first brush with otherworldliness [inspired by William Blake’s]: a tree full of angels. I made my own angel tree: larger scale, with a thick pen.”

Thornquist liked what she saw at the Emerging Artist show, which displayed works from artists from all over Putnam County. “There were some very beautiful pieces there,” she said. “Much realistic art, still lifes. The woman there invited me back for a young-artists-and-60-plus-year-old-artists-working-together thing. I’m not sure what I’ll do, but I’m always generating something.”

One thought on “Wylie Thornquist: Drawing Is My Favorite Thing”