“The art of dining well is no slight art, the pleasure no slight pleasure.”

As great as it would be to make a living cooking, eating and writing about food, that is currently not happening in my life. But in my alternate reality as an art director and design consultant, I was recently offered the opportunity to combine art, commerce and food designing a cookbook.

It’s not just another flavor-of-the-week endeavor: The project is titled Feeding the Heart and is a labor of love for the cleverly named Department of Nourishment Arts (DNA) of the Sullivan County–based Center for Discovery, a not-for-profit residential rehabilitation facility for children and adults with complex disabilities and autism spectrum disorders.

The center encourages the health, engagement and development of those in its care though a holistic program of therapy, nutrition, learning and activity in a bucolic Catskills location. A major focus of the program and its activities is Thanksgiving Farms, actually a cluster of locations that provide much of the food consumed at the center. DNA is itself an extended team of farmers, chefs and nutritionists who espouse a philosophy of “seed-to-belly” farming and eating and share a belief that “food is medicine.” 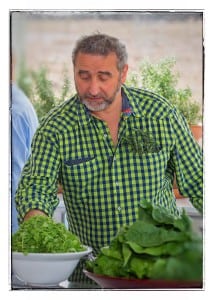 But this DNA offers way more than eat-your-vegetables sustenance. Program chief and NYC-based serial restaurateur (Beppe, Maremma, Salumeria Rosi) and author Cesare Casella has gathered a stable of culinary artisans — chefs April Bloomfield, Mark Ladner, Bill Telepan, and Pecko Zantilaveevan among 30 or so others, the so-called DaVinci Master Chefs — who inspire and train the residential culinary staff and have graciously provided recipes for the cookbook.

The real perk of this assignment for me has been the firsthand opportunity to enjoy Chef Casella’s culinary artistry informally and off-the-cuff in occasional planning sessions at the center.

Tuscan to his core, Cesare makes it all look so simple and easy, combining the most commonplace ingredients (albeit incredibly fresh and flavorful thanks to the magic of the farm) into unbelievably surprising, deliberate and tasty combinations, none more so than this week’s offering, Pontormo’s Salad.

A reclusive 16th-century Florentine painter and gourmand, Jacopo Carucci, known as Jacopa da Pontormo or simply Pontormo, has long been a favorite of Casella. Researching the artist’s life, he adapted this recipe in the 1980s to serve at his family’s trattoria, Il Vipore, outside Lucca, Italy, and it has followed him ever since.

In his study of Pontormo’s life and times, Casella observed that although the artist was conversant with the court cuisine of the Medicis, the meals he prepared for himself were quite modest.

Pontormo’s Diary (also known as My Book), discovered in Florence at the beginning of the 20th century, is an obsessively intimate 23-page record of the most mundane features of his daily existence over a two-and-a-half-year period just before his death in 1557. Pontormo’s detailed but terse account of food eaten (and famously, expelled), illnesses, the weather, encounters with acquaintances and fellow painters is unlike any typical artist’s diary, save perhaps Andy Warhol’s. The diary was most likely preserved because of the illustrative sketches in its margins.

The manuscript describes a man absolutely obsessed with his body, his feelings, his culture — and his diet. A two-page excerpt I read in translation covers roughly a six-week period, and the recurring culinary themes are “salad,” “omelette” and variations and combinations of the two.

The elements of Casella’s homage — eggs, pork, greens — is one Pontormo (who notoriously decorated his living quarters with hanging slabs of pancetta and the like) could have cooked for himself and fully captures the essence of farm-to-table eating. A lowly mess of mixed greens becomes a surprisingly tasty and substantial meal with the addition of pork, dried herbs and a healthy-but-luscious dose of protein — soft scrambled pastured eggs.

It sounds so simple as to seem obvious, but in practice and on the plate (and in the mouth) it is a revelation. Although I can’t wait to try it with some fresh summer garden herbs tossed among the greens, this is actually a meal to be savored year round, any time of the day. Casella admits, “This is the only dish I use dry herbs. Why? I don’t know.”

For a man whose sartorial accessorizing runs to a large bunch of fresh rosemary in his shirt pocket, this is no small admission, but then again every artist should be allowed some poetic license now and again.

Prepare the dressing: In a small bowl, combine the vinegars and wine. Whisk in salt and pepper, then the olive oil. Set aside.

Heat 2 tablespoons of olive oil in a large frying pan over medium heat. When hot, add dried herbs and pancetta and cook until pancetta is transparent (about 5 to 7 minutes).

As the herbs and pancetta cook, lightly beat the eggs with the salt and pepper. (Casella says the secret is to not mix the eggs too much and to allow the whites to begin to set in the hot pan before stirring.) When the pancetta is cooked, add the eggs to the pan and after a minute or so, stir everything slowly but continually. Cook to a very soft consistency. You do not want dry eggs. Remove from the heat just before done.

In a large bowl, dress and lightly toss the greens with the dressing. Toss the warm egg-pancetta mixture with the greens lightly with tongs. Divide among four plates and serve immediately.

Photos by Jesse Wall / The Center for Discovery