Moves to enhance the safety of crude-oil transportation and passenger railroads and to control oil processing advanced recently at both state and national levels, but one key initiative — stricter federal standards for so-called “bomb trains” — drew immediate attack both from industry insiders who termed the rules excessive and environmentalists who labeled them insufficient.

The latest developments include:

Capping almost two years of preparation and temporary measures, the U.S. DOT revealed its “final rule” on carrying of flammable liquids, such as crude oil and ethanol, by railroads. The “rule” — actually a 345-page document with numerous regulations and provisions — specifies in part that tank cars built after Oct. 1 of this year and transporting the most dangerous fuel must have walls 9/16-inch thick and contain other safety features; that older cars be retrofitted to make them safer; that the weaker cars be removed from service over the next two to 10 years; that certain cars (not all) have higher-quality brakes than those currently used; and that the most volatile trains reduce their speed to 40 miles per hour in metropolises considered “high-threat urban areas” from an anti-terrorism perspective (in this state, only New York City and Buffalo qualify). 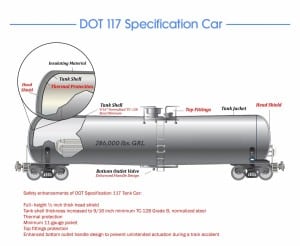 “Safety has been our top priority at every step in the process for finalizing this rule, which is a significant improvement over the current regulations and requirements and will make transporting flammable liquids safer,” U.S. Transportation Secretary Anthony Foxx declared.

Oil trains roll down the western side of the Hudson River, opposite Philipstown and past West Point, raising local fears of a derailment inferno, and environmental groups active in the valley and beyond find the DOT rules lacking.

For instance, Riverkeeper said in a several-page analysis, “the new tank-car standards do not apply to every oil tank car” but merely to long “High-Hazard Flammable Trains,” comprised of 220 continuous oil or ethanol cars or 35 such cars interspersed throughout the train’s length. However, Riverkeeper states, “34 tank cars can carry approximately 1 million gallons of oil, meaning that the worst cars will still be on the rails, hauling explosive oil, and not bound by any of this rule’s safety provisions.”

In short, it asserted, DOT’s set of regulations “has huge loopholes.” The issue involves the present tankers, known as DOT 111 cars, and somewhat newer CPC-1232 cars, which also were involved in derailments that this year caused major conflagrations in rural areas. The DOT wants to replace the 111 with a beefier DOT 117 model.

Riverkeeper said that while the new cars will have thicker walls, retrofitted tankers “will be allowed to stay in use” with a thinner shell, leaving them more likely to be pierced or torn open in an accident.

Riverkeeper observed that Canada, which presented its own set of heightened rules the same day as the American regulations, applies upgraded car-safety rules “to every single tank car,” and the NTSB “recommended that the new U.S. standards apply to every single tank car carrying hazardous flammable liquids” as well.

Citing these and other reasons, on May 15 in the 2nd U.S. Circuit Court of Appeals, in New York City, Riverkeeper brought a legal challenge to the DOT regulations. Similarly, in San Francisco, the Sierra Club and other organizations filed a comparable federal appeals court suit.

“These seriously flawed standards all but guarantee that there will be more explosive derailments, leaving people and the environment at grave risk,” Riverkeeper President Paul Gallay said. “The DOT completely fails to recognize that we’re in the middle of a crisis. We don’t need bureaucratic half measures that are years away from implementation. We need common-sense protections today.”

The American Petroleum Institute, a Washington-based trade organization for the oil industry, disagreed profoundly. API, too, filed a lawsuit, seeking a longer period of time in which to retrofit existing tank cars and objecting to the DOT stipulations regarding enhanced brakes, among other points. It described various demands under the new rule as “in excess” and beyond DOT purview.

In a statement before the lawsuit was submitted, API President and CEO Jack Gerard referred to “the 99.997 percent safety record of freight rail” and said API members “support upgrades to the tank-car fleet and want them completed as quickly as realistically possible” but believe the DOT schedule “will lead to shortages.”

Like the environmentalists, Schumer called for taking action swiftly. “Allowing these outdated oil cars to continue rolling through our communities for another eight years is a reckless gamble that we can’t afford to make,” he said May 4, announcing his draft bill. Earlier this year, he introduced a related measure that would exact fees for use of DOT 111 cars for fuel; the fees would go into a fund to cover costs of handling oil-train disasters. Both pieces of legislation were pending before the Senate Commerce, Science and Transportation Committee as of May 26.