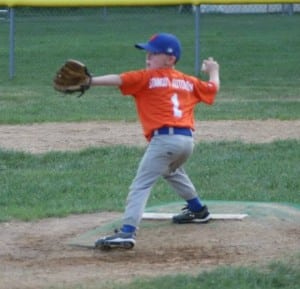 In a thrilling night game, it turned out that only darkness could end the scoring between the Mets and the Yankees. The Yankees got big hits from Jeremy Hall and Ryan Van Tassel and jumped out to an early lead. However, early walks and a couple of huge hits from Dylan Horan helped the Mets storm back and take a big lead. Hunter Erickson pitched well, and the Mets held onto that lead until the fifth inning when the Yankees rallied.

Down four runs with the bases loaded, Van Tassel hit a shot to center field that would’ve scored three had it not rolled under the fence. The Mets were able to escape the inning up by two, and darkness halted the game before either team could get a shot at the final inning. A rematch in the last game of the season for these 2 teams should be one to watch!

A pitching duel between Trajan McCarthy and Julian Ambrose, who both threw three scoreless innings, turned into a big win for the Yankees when the Giants took Ambrose out in the fourth inning. Hits by Jeremy Hall and Ryan Van Tassel combined with a number of walks, set the stage for Jesse Tippet’s bases-clearing single to blow the game wide open.

Roy Smith had two big hits for the Giants in the loss and pitched a strong inning, but in the end the Yankees held them off with some strong pitching by Hall to close the game. With only three games left in the regular season, it’s shaping up to be anyone’s title to win this postseason.