For many people, summer doesn’t begin until the parades and barbecues of Memorial Day roll around. But for black-legged ticks, also known as deer ticks, summer started weeks ago.

“I think many people don’t understand the degree to which tick-borne illnesses are seasonal,” said Dr. Richard Ostfeld, a senior scientist with the Cary Institute of Ecosystem Studies in Millbrook.

Tick season traditionally begins in the middle of May, although Ostfeld warns that because of a steadily warming climate, ticks are emerging earlier and earlier. It’s this current stage — the nymph stage — that is the most dangerous. That’s when the ticks are only about 1/8-inch big, making them difficult to detect. In early July the nymphs go dormant and don’t come out to feed again until late autumn, when they reach their adult stage.

By then the ticks are much larger, making them easier to spot. People tend to be outside a lot less in late fall than they are in the summer, and they often have long pants on, which will deter ticks from reaching their skin. And only about 10 percent of nymphal ticks make it to the adult stage, so their numbers are fewer.

That means that right now is prime feeding time for nymph ticks, and although this season is not predicted to be as particularly bad as previous seasons, it’s not because of the brutally cold winter the Hudson Valley just endured.

“There is no strong correlation between winter cold and tick population,” said Ostfeld, in response to the oft-repeated mantra that harsh winters keep tick populations in check.

“Ticks are exquisitely well adapted to dealing with whatever Mother Nature throws at them. They don’t seem to care if it’s super cold in the winter or super hot in the summer.” Ostfeld also noted that some studies seem to suggest that heavy snow cover might actually be good for tick populations, as it insulates and protects them.

Instead, the best indicator of how robust the seasonal deer tick population is going to be depends on the population of another animal, and it’s not the one you think it is.

“A lot of folks assume that the amount of tick-borne illnesses is related to how many deer there are, but that’s not supported by most studies,” he said. “The name ‘deer tick’ is an obsolete name; the correct name is ‘black-legged tick.’ ‘Deer tick’ is easier to say, so that’s what most people still call it, but that perpetuates the notion that deer are the most important player in this.”

Instead, the data that Ostfeld and his colleagues have been collecting for over 20 years suggests that it’s the size of the white-footed mice population the summer before that indicates how robust the tick population will be the following year. White-footed mice are one of the primary reservoirs for the spirochete that causes Lyme disease. Last year, the population of white-footed mice in the Hudson Valley was rather low.

But that doesn’t mean people should get complacent. Dutchess and Putnam counties are still hot spots for tick-borne illnesses. Public health officials warn that there is no such thing as a low-risk year and that the numbers of reported cases of tick-borne illnesses in the area are not an accurate reflection on their prevalence throughout the Hudson Valley.

Rachel Gresse, a senior public health nurse for the Putnam County Department of Health, noted that almost all reported cases of tick-borne illnesses come in as a result of a positive lab test. But the lab test for Lyme disease is only about 50 to 60 percent accurate, and many Lyme disease patients are never tested at all.

“If you go to a health care provider and they diagnose you with erythema migrans,” said Gresse, referring to the clinical name of the familiar “bull’s-eye rash” that accompanies many cases of Lyme disease, “then that is a confirmed case. But I don’t hear about it because I don’t get a lab report. They won’t test the patient; they’ll just treat them.” Over the past few years, she’s been reaching out to health care providers in the area and asking them to report how many bull’s-eye rashes they’ve been diagnosing without running lab tests.

And in some cases, the weather itself may affect how many cases of tick-borne illness occur.

“When we have one of those summers in which it rains every weekend, then people aren’t going outside as much, so they’re not getting bit,” noted Andrew Rotans, a senior public health advisor with the Dutchess County Department of Health. 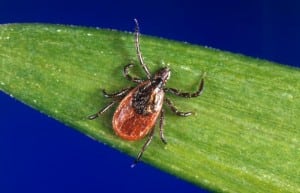 So until the nymphal ticks become dormant in early July, residents of the Mid-Hudson Valley should continue to take precautionary measures. Ostfeld urged anyone going outdoors to pay particular attention to their shoes and socks. “The place where ticks are laying low, waiting for you to walk by, is either on the ground or on very low-lying vegetation, no more than a couple of inches above the ground,” he said. “A lot of people think that ticks can fly or jump or hop or fall out of trees, but none of that is true. So if people focus their repellent on their shoes and socks, they’ll help themselves out a lot.”

Ostfeld recommends using insect repellents with DEET or picaridin, the latter of which is applied to clothes instead of skin. He also noted that oil of lemon eucalyptus has shown to be effective to a somewhat lesser degree.

And as Kristine Boyle, a public health educator for the Putnam County Department of Health, warned, routine tick checks should be done even by those who aren’t going outside. Ticks can easily hitch a ride inside on pets or a child’s backpack and find their way to you. “Check in uncommon places,” she said. “On your head, behind your knees, behind your ears. They might sound like weird places, but ticks don’t care. They’ll lodge anywhere.”