Set to approve a routine revision to a drainage project for South Mountain Pass, the Philipstown Town Board Wednesday night (May 27) abruptly delayed a vote — and on-site work — after residents objected that it would bring unwanted paving to a piece — or all — of the dirt road on which they live and play.

To thoroughly air the conflicting and complicated views on the issue, and dirt roads overall, the Town Board scheduled a workshop for next Wednesday, June 3, at Town Hall.

In other business, the Town Board unanimously approved a new contract allowing Cablevision to retain the cable TV franchise for Philipstown, in return for a share of cable fees and the cable company’s continued provision of free Internet access to schools, government buildings and firehouses, as well as new assistance in offering it at the Chestnut Ridge complex, apartments for modest-income senior citizens in Cold Spring.

Expressing fears of what the drainage project could portend, an ad hoc South Mountain Pass delegation spoke of using the road not only as drivers but for walks with children, horseback riding, other forms of recreation and enjoying a tranquil lifestyle.

Twisting and turning, South Mountain Pass winds between two state highways, Routes 9D and Route 9, on the southern border of Philipstown. Its Route 9 end lies in Westchester County. On the other end — the westernmost — Philipstown plans to install about 710 feet of drainage pipes. 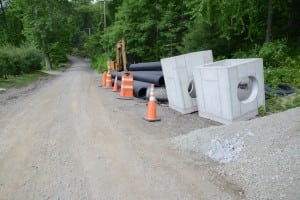 In March, the town government anticipated laying about 600 feet of pipes, running east from Manitou Road, just off of Route 9D. Now it wants to proceed uphill beyond the original endpoint. To do so, the board must approve a contractor change order and project price increase, from $129,876 as first specified to $250,916.60 as expanded. That vote was what the board postponed.

“This does not include paving right now,” he informed the restive audience. “But there is a discussion about paving the hill, because if we are going to invest [so much] in drainage, we’d like to secure that investment. This doesn’t mean South Mountain Pass is going to get paved from 9D to 9. I do support the idea of paving the hill — not the entire road.” 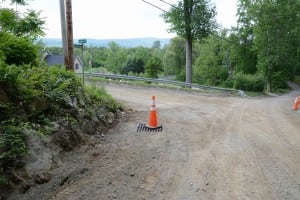 Drainage work would begin near the intersection of South Mountain Pass and Manitou Road, just above Route 9D, seen in the center distance.

South Mountain Pass homeowner Russell Dushin concurred that “there may be some reasons to pave some portions of that hill, particularly the 9D side.” He attributed several drainage problems on South Mountain Pass to some residents’ own actions and suggested that working with those doing questionable things could solve the problems without paving.

Joyce Blum, who lives on High Ridge, a lane intersecting with South Mountain Pass, described previous unsuccessful attempts at drainage. “What’s the point of having a vote when we know the drains don’t work?” she asked.

Alex Clifton warned that paving “is going to mean more traffic and it’s going to be faster traffic. We don’t want the paving. We want what we have.” Paving, he contended, “is an erosion of our way of life.”

Shea, too, referred to erosion — runoff and “stream degradation that is pretty much constant” with dirt roads sprayed for dust-control and given other surface applications and treatment year-round.

Nick Angell complained the Highway Department engaged in repeated scraping of South Mountain Pass, “solving no problems” as it utilizes “out-of-date methodology.” He proposed that he and his neighbors, at their — not the public’s — expense, undertake a thorough study of the best ways to deal with the South Mountain Pass’ problems and the challenges represented by all dirt roads. “That will bring us down to money and taxes,” he said. 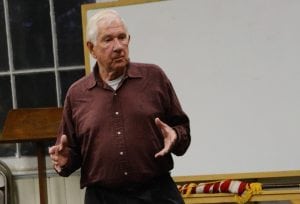 Critical of current approaches to dirt road maintenance, Nick Angell explains his views to the Town Board.

If it turns out that paving is indeed the most economical way to handle the ongoing problems on South Mountain Road, Angell continued, “then it seems to me the next step is to ask the residents of South Mountain Pass if they want to pay for the difference” — the sum it would cost the town to use non-paving solutions, versus the lower costs of paving. “That’s my proposal. It’s an effort to be practical and bring it down to dollars and sense.”

“It’s something for the board to consider,” Shea responded.

The board then decided to dedicate a workshop session to the issue and postponed its vote on the change order.

The evening began with a public hearing, followed by the board vote, on the latest contract granting the cable TV franchise in Philipstown to Cablevision of Wappingers Falls Inc., for 10 years. The previous 10-year contract began in 2004 and the Town Board, in particular, Shea, spent more than a year negotiating a new one.

Under its terms, Cablevision will pay the town government 5 percent of the annual gross income it gets from holding the franchise, minus fees paid to higher levels of government, such as the State of New York. The agreement also demands that Cablevision give free basic service to Philipstown’s libraries, schools, town municipal buildings, firehouses, and ambulance corps and provide $10,000 for government cable TV programming.

Although it’s not specified in the contract, Cablevision likewise is helping with computer-related improvementss at Chestnut Ridge, according to Shea and Dan Ahouse, Cablevision’s area director of government affairs. Ahouse said Cablevision “put a hot spot into the community room to make Internet available there” and “we talked about some assistance we’re going to give to put devices there” for the seniors’ use. “We recognize the importance of the Internet for everyone, especially for seniors who might not be able to get out” and take advantage of free services at a library or other facility.

During the hearing, no one opposed the franchise renewal, although attendees wondered about the non-availability of FiOS, supplied by Cablevision competitor Verizon.

“They have no desire” to bring FiOS to Philipstown, said Town Board Member Nancy Montgomery. “We don’t have the population they need.”

Moreover, Shea added, “the terrain here is too difficult for them to install their infrastructure. They’re not coming.”