Two resign from committee amid dispute with mayor

The Village of Cold Spring had a fireworks display this week well in advance of the Fourth of July celebration, which by the way, despite published alarms to the contrary, is on track to be held in its traditional manner.

The premature noise and sparks stemmed from both a genuine municipal disagreement, along with some manufactured crises including one over the Fourth of July celebrations, courtesy of the Putnam County News and Recorder, which is also the financial underwriter of the Fourth of July fireworks.

The real trouble began when the chair of the village’s Code Update Committee, Jack Goldstein, resigned on May 29, stating in an email to Mayor Dave Merandy that he strongly disagrees with the mayor regarding how the update should be conducted. In October 2014, Goldstein had been named chair of the group of volunteers charged with bringing the village’s badly outdated zoning code into conformity with the 2012 Comprehensive Plan. 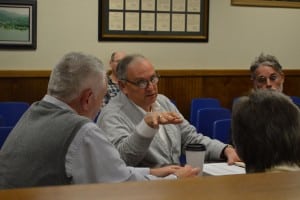 In the email, Goldstein stated: “Your decision to reopen the matter of the environmental consultants has made me realize that we differ too fundamentally on how to conduct the code update for me to continue on the committee.” Merandy had emailed Goldstein a day earlier, indicating that he planned to replace the consulting firm Barton & Loguidice (B&L) with Greenplan, a firm that had been involved with the project previously.

There is a complicated history to the B&L/Greenplan saga. Greenplan, a Rhinebeck-based consulting firm, wrote a successful grant application to the New York State Energy Research and Development Authority (NYSERDA) resulting in the village receiving a $75,000 grant to update its zoning code. Greenplan had offered do the application at no cost to the village on the understanding that if it proved successful, the firm would be awarded the contract to help revise the zoning. The grant was awarded in December 2013.

In July 2014, newly elected Trustees Michael Bowman and Cathryn Fadde urged the board to follow village procurement policy by issuing a request for proposals (RFP) before entering into a contract with a consultant. Then-Mayor Ralph Falloon and Deputy Mayor Bruce Campbell, both of whom had previously supported awarding the work to Greenplan, voted with the new trustees and an RFP was issued. At a subsequent meeting, the project was awarded to B&L by a 4-1 vote.

Trustee Stephanie Hawkins, who had worked closely with Greenplan during the grant application process, was the lone dissenter. She has since married Merandy, who at the time was a member of the Philipstown Town Board. He was elected mayor of Cold Spring in March 2015. Hawkins did not seek re-election.

The decision to reverse direction and hire B&L did not sit well with Greenplan. A November 2014 letter from Ted Fink, a principal with Greenplan, requested payment of $7,603.75 for the work done on the grant application despite the prior offer to do the work pro bono. Fink expressed his dissatisfaction with the process, stating that NYSERDA had accepted the project being awarded to Greenplan without an RFP because the agency considered the application process itself to be competitive. Hundreds of communities vie for the state grants. Then–Village Attorney Michael Liguori concurred, also pointing out that the village can hire consultants and other professionals without a bid process.

The issue of payment to Greenplan has yet to be resolved. In addition, a formal contract has not been signed with B&L. The contract with NYSERDA has also not yet been signed, although the Code Update Committee voted last week to recommend, with conditions, that the trustees authorize Merandy to sign the contract.

In an email to The Paper on June 1, Goldstein reiterated his reason for stepping down. “The mayor’s decision to reopen the consultancy was my reason for resigning,” he wrote. “I feel it is a serious misstep detrimental to the code update process.”

Merandy responded in a telephone interview with The Paper on the same day. “I think the village definitely has an obligation to Greenplan,” he said. Commenting on the switch to B&L, he added, “If you want to build trust, that’s not the way to run the village.” Merandy said that he sought legal counsel and was advised he is on solid legal ground in this bid to revert to Greenplan. He said he has spoken with Fink and is awaiting a cost breakdown from the consultant. “If the numbers are right, I’ll do all I can” to hire Greenplan, he said.

Much of the Tuesday (June 2) Village Board of Trustees meeting was taken up with the aftermath of the Goldstein resignation, which included the announcement that Barney Molloy, who lost to Merandy in the March village election, had decided to also resign from the Code Update Committee.

Goldstein reiterated his belief that he could no longer sustain the productive working environment of the committee he had established given his disagreement with the mayor.

Discussion during the business segment of the meeting went over the ground reported above. There was a consensus that the facts and the legalities involved are a muddle. There was consensus that Goldstein’s resignation was very much regretted. And there was a somewhat begrudging consensus (including from Goldstein) that the mayor had a right to move in the direction he resolutely restated he was going, even if people believed it was not helpful.

Trustees Fran Murphy and Marie Early asked Goldstein if he would reconsider, and he politely said he had thought about it a great deal and would not. Goldstein did say he had offered a compromise wherein both consultants could share in the work, although not necessarily equally. But Merandy rejected that as unmanageable, and Goldstein said he understood but that it only illustrated why he should step aside “for someone who better understood the frame of reference.”

Murphy, after describing how difficult it was to trace back all the steps to the current situation and how one could see things from different perspectives, said that she didn’t think it wise to replace B&L at this point.

The trustees voted to accept Goldstein’s and Molloy’s resignations, approved advertising for candidates for the now open committee seats and voted to move toward signing the NYSERDA agreement.

A lot left to say

In the public comment segment Merandy’s Greenplan position (which is not yet final) came in for some critical perspective from members of the Code Update Committee and others serving on village boards. All stressed the vital importance of rewriting the village zoning code to reflect contemporary realities and that delays would jeopardize funding and project completion. 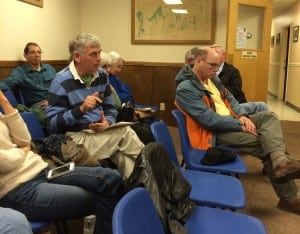 Michael Armstrong comments during the meeting.

Michael Armstrong, a Code Update Committee member and former chair of the Comprehensive Plan board declared the code committee “decimated” by Merandy’s position. He lamented the loss of Goldstein and Molloy and suggested the committee’s work would be set back six months.

Carolyn Bachan of the Historic District Review Board urged scrapping all consultants, arguing locals could handle the whole job. She characterized NYSERDA as having a radical environmental agenda.

Ruth Elwell, a recent appointee to the Code Update Committee, agreed with Armstrong on the impact of changing consultants and said a consultant was needed as New York State law was too complicated to proceed without one.

Donald McDonald, a Code Update Committee member and chair of the Planning Board, said he agreed with scrapping consultants, believing it can be done without them. But he agreed the trustees should decide the matter.

7 thoughts on “Village Government in Noisy Argument Over Code Update”