Firing up the grill for graduation season and summer suppers takes me back to my youth and brings on a yearning for grilled pork. Dinners when I was growing up along the Mississippi River centered on preparing food influenced by early European settlers, but the most memorable meals in warm weather were often anchored with St. Louis barbecued pork steaks.

My family rarely ate high off the hog, as the top choice was typically priciest. But in place of fine ham and luscious loin, we splurged on pork steaks — not year-round — but for summer grilling. If there was a sure thing for a meal around our family picnic table, this was it. And it was nearly impossible to keep the grilling a secret. Neighbors and passers-by on the sidewalk would slow down to wave when they sniffed that blend of fiery sweet sauce and sizzling pork drippings in the air. 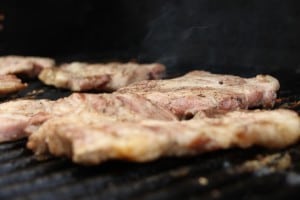 Steaks on the grill

Now as my own family has moved across the country, we’ve explored many regional foods. There’s always room in the repertoire to add new discoveries, but we also rotate deeply rooted recipes from the past. Not too many years ago, it seemed appropriate to prepare St. Louis–style pork steaks for my son’s kindergarten graduation. After all, his godmother, Jenny, and her daughter, Sam, traveled to New York from St. Louis to visit for a few days. Until then, I’d never purchased pork steaks in my adult life.

Once out of college, I moved out west, and as a newly minted young adult, I sampled a world of food choices. Now that I’ve matured into adulthood (wrinkles and all), childhood memories of a pony-tailed girl devouring an enormous pork steak, licking sauce from her fingers without fear of reprimand, come clearly back to me.

For our festive meal, I made a special order at the meat counter and brought a choice cut home to my husband, Greg, for grilling. He grew up in Michigan, and until preparing them himself, he didn’t think much of pork steaks. Hand him his favorite Coney (a hot dog with natural skin casing, onions and brown chili) and he’s back home again. But he agreed to slow-grill the pork steaks, even brushing them precisely with tomato puree. 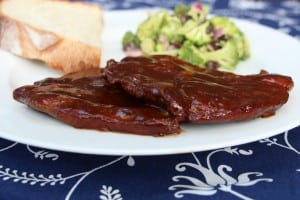 I told Greg that every backyard chef in my memory added beer to the sauce. He had a few bottles of his favorite on hand, which appeared to work fine — one bottle for the recipe, two bottles for the chef, according to legend. Greg slowly grilled the meat and then placed it in a pan of sauce to simmer.

When we sat down at the patio table to enjoy the graduation feast and Greg presented the platter of pork steaks, Jenny smiled with delight.

“Fabulous!” she exclaimed with genuine appreciation. “You made pork butt.”

Well, our young sons, who had been preconditioned by their preschool head mistress to use “bottom” in place of “butt” at all times, jumped in their surprise. If a godmother could say “pork butt,” why couldn’t they give it a shout? “Pork butt! Pork butt! Pork butt!” They shook up the conversation, and we tried to camouflage our own laughing. At that shining moment, “bottom” took a back seat and “butt” emerged from backyard barbecue chatter to the kindergarten playground.

I could just imagine the look on the headmistress’s face at the chanting. “You are role models for your children,” she always reminded parents. “We’d like to leave the four-letter words out of our environment.”

The pork steaks, though commonly regarded as pork butt, are cut from the upper shoulder blade, nowhere near the … bottom. But young boys are hardly fooled when it comes to table etiquette. “Would you care for barbecued pork shoulder?” or “Please pass the pork butt.” It tastes the same but sounds entirely different.

Grilling rights in the family were turned over to me a while back, and sunny skies recently inspired a pork butt dinner. Cold Spring’s Marbled Meat Shop was the only stop needed to pick up a few pounds of pork. Shop owner Lisa Hall confirmed over the phone that she had pork shoulder in the meat case. I made my way there directly and found Hall and her husband, shop co-owner Chris Pascarella, taking care of customers buying everything from pickles to pastured beef cuts. Pascarella presented a selection of pork shoulder before slicing my choice into ¼-inch thick steaks.

“This is pork shoulder from a Berkshire pork whole hog,” Pascarella said. “It’s actually a cut from the Boston butt.”

The local purveyors sent me away with pork ready to prepare and confirmed the origin of the meat: Autumn’s Harvest in Romulus, New York.

For every kind of meal from reunions to graduations, from peppers to pineapple, the season calls for grilling. There’s a menu in the making for my eighth grader’s June graduation, and in keeping with tradition, we’ll mark the occasion with another backyard barbecue. Bottoms up!

Kosher salt and pepper for seasoning steaks and sauce

Slowly grill steaks on low to medium heat, browning on both sides until fully cooked. Brush steaks with sauce and grill an additional 2 minutes.

Place grilled steaks in pan of sauce and simmer 2 hours until tender.