Strong pitching helped the Yankees earn another win against a Nationals team that was dealing with the struggles of playing in back-to-back games. William Bradley kept the Nationals in the game with solid pitching and a big two-run home run, and Jack Gordineer contributed a hit and had some great plays in the field, but it wasn’t enough to stop the Yankees.

The Yankees offense was powered by home runs by Jeremy Hall and Ryan Van Tassel, with Jordan Albertson and Ty Villela scoring runs for the Yankees in their victory. 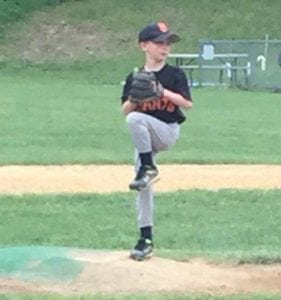 Roy Smith of the Philipstown Little League Minor Giants gets set to deliver.

On a sweltering Saturday afternoon, the minor Mets and Giants bravely battled through possibly the longest and hottest game of the year. Pitchers for both teams experienced frustration with walks during the grueling contest. The Giants were able to capitalize first, using solid baserunning and strategic steals to grab a big lead. However, after giving up eight runs in the first two innings, the Mets turned it around and came roaring back with a thrilling series of runs, including at least two steals at home plate.

By the bottom of the fifth inning, the Giants were clinging to a 9-7 lead, demonstrating just how well matched these two teams really were. Pitching with a (healing) broken finger, Thomas Tucker closed out the game with a hitless sixth inning. Tucker had a great game overall, reaching base all four times, registering two singles, a walk and a triple. Other hits for the Giants came from West Watman, Ian Matkin, Roy Smith and Julian Ambrose. The Mets and the Giants will meet Wednesday for a rematch.