If one were afraid of unearthing new knowledge, last week’s (Thursday, May 28) Discovery Night at Haldane was emphatically not the place to be, because discovery was going on in every nook and cranny of the school. While somewhat modeled on a traditional science fair, there was much more to it than that. With students from grades 1 through 12 represented, and most departmental hands on deck, the exhibits, tables, presentations, displays and tours pervaded the whole of the elementary/middle school building, following a trail of academic bread crumbs from both gyms, through the cafeteria, in classrooms and even down a hallway. It was an ambitious undertaking and the overflowing school parking lots were testimony to the success of the evening.

Although this was the most comprehensive event of its kind, it was born from earlier iterations, including annual or semiannual health fairs, eco-nights and a smaller-scale edition called STEM (science, technology, engineering and math) night, which debuted last year. Middle School English teacher Kim McCollum came up with the new name, which allows for no limitations on subject matter, and a focus on inquiry and analysis. 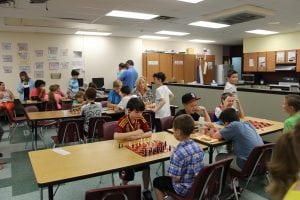 The ’chess room’ was filled with players throughout Discovery Night.

Haldane Elementary and Middle School Assistant Principal Julia Sniffen called this year’s focus on Project-Based Learning (PBL) the catalyst for the event. “Since the beginning of the year, we’ve been so excited about all the PBL things we’ve been doing, and it’s so important for kids to share the work they’ve been involved with in meaningful ways — they deserve an audience. Having an audience which goes beyond their parents and extends to the community will energize this teaching and learning philosophy,” she explained. “There is so much student work, and we didn’t want to exclude anyone, so basically this was open to all.”

The large gym was filled with displays of work done by students from grades 2 through 6. This included eco-projects, a science fair and more. One eye-catching display lured the eye with images of doughnuts. Upon closer inspection, it was revealed to be a business plan for the fictitious “Double Donuts,” created by the students of sixth-grade math teacher Tom Virgadamo, from the prompt “Will your business sink or swim?” A quick glance around the room revealed booths focused on subjects as disparate as penguins and an analysis of what would make a dream community for 10-year-olds. Large-scale roller-print artwork decorated a swath of the wall. 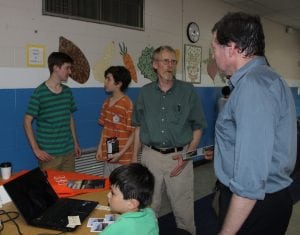 Local nonprofits, many with summer programs for kids, such as Building Bridges, Building Boats, headed by David Hardy, center, had informational tables at Discovery Night.

Across the way, in the cafeteria, many local organizations, some summer-oriented, others not, set up tables where they spoke informally to kids and their parents about their programs. Among those represented were Building Bridges, Building Boats, which runs a summer rowing camp; the Farm to School program that has brought healthy, locally grown vegetables and more to that very cafeteria; and the Hudson Highlands Land Trust, which conducts hikes and other activities related to nature. Others setting up shop were a fifth-grade robotics squad and a booth titled “Repurposed Recess Games.”

In an adjoining room, furrowed brows were much in evidence as chess players squared off. In a hallway leading up to the small gym, a high school physics demonstration highlighted “bodies in motion.” Meanwhile, in an upstairs classroom, fourth-grade teacher Simon Dudar explained his yearlong project utilizing media (and much more) in the classroom, and high school government and sociology teacher Melissa Seideman showed off the capstone projects done by her sociology elective students. 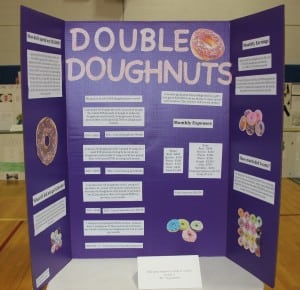 A sixth-grade business plan for the fictitious ’Double Doughnuts’ answered the question: ’Will your business sink or swim?’

Finally, the small gym served as backdrop to two distinct aspects of student work. Students in the science lab elective, which is guided by teacher Christian Hoolan but driven by the direct research of its participants, displayed an analysis of their projects, many of which were lab-based. Senior Gianna Galazzo, who plans on studying aerospace engineering at Rensselaer Polytechnic Institute next fall, said that she and the other students “conferred with Mr. Hoolan and were pretty much allowed to pursue whatever we were most interested in. Most people had experimental things, which they hypothesized, but I did background research instead.”

Galazzo’s topic, fittingly, was “Space: The Final Frontier.” Another project, from senior Julia Olsen, was titled “A Look Into the Learner-Centeredness of Classes of Different Subject Areas” and involved analysis of data related to teaching methodologies and their impact, while another project centered on a “Comparison of Efficiency of Various Burned Fuels.” 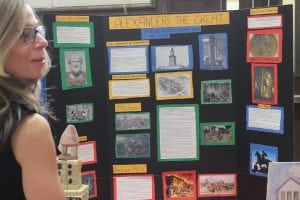 Biographical subjects were ever-popular in the high school history projects. This project on Alexander the Great joined others on Che Guevara, Gandhi, Wilma Mankiller, Henry Ford and more.

The rest of that room was filled with displays relating to National History Day, a program in existence for about 30 years now, which has recently been tapped into by Haldane. Social studies department chair Jackie McGrath called it “a great way to give kids a parameter to do types of research, while also giving them an outlet to showcase their creative side. It’s been a great initiative.” Her colleague, global history teacher Michelle Grasso, explained that each year a national theme was chosen, this year’s being “Leadership and Legacy.”

She said each student had to submit a formal proposal and discuss it with a four-member departmental panel, which not only addressed why they made their subject choice but how they would transmit their ideas. “We tried to stress making it interactive and engaging to the viewer,” Grasso said. 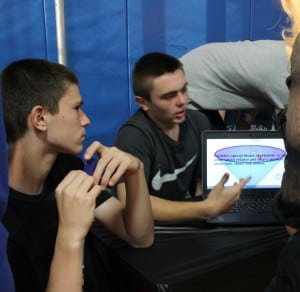 High school science and history projects took many forms, including computer presentations; this one concerned Einstein’s theory of relativity.

Spotted around the room were conventional biographical displays, including two about Che Guevara, and zipping through time, Alexander the Great to Desmond Tutu. Another, titled “The Exodus,” recounted the sad legacy of Jim Jones’ cult, which resulted in the suicides at Jonestown, Guyana.

Haldane’s own rock band, the Blues Devils, closed the evening out, playing to a packed gym full of fans.