Half Moon Theatre will close its season at the Culinary Institute of America with its fifth annual Ten Minute Play Festival. This year’s theme, All You Can Eat, celebrates the new partnership between HMT and the CIA with ten 10-minute plays — all written by nationally recognized playwrights expressly for this festival — set in familiar local eateries or featuring food-related themes at hot spots around the Hudson Valley. 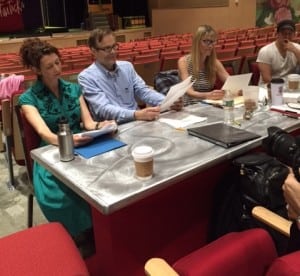 On this culinary adventure, journey to Mercato restaurant with a couple for a special occasion; join Margo and Dean while they fight for their future together over a tiramisù at the CIA’s Ristorante Caterina de’ Medici; eavesdrop on a master chef and her assistant as they prepare a dish at an exclusive French bistro; sit in a Cold Spring gazebo with an odd couple; and ride with a mother and daughter as they careen down the Thruway toward Junior Chef summer camp at the CIA.

Half Moon Theatre’s company of professional actors and invited artists participate in this staged reading. The event is geared toward a more mature audience, with adult humor and situations.

Pretheatre evening reservations at CIA restaurants are available for $39 per person at American Bounty, Bocuse and Caterina de’ Medici by calling 845-905-4533. Pangea will be open for dinner before the Friday performance, and a $29 pretheatre menu is available at ciarestaurantgroup.com.

Photo courtesy of Half Moon Theatre