False invoices have been sent to local businesses in recent weeks as part of a scam. Tom Cunningham, athletic director at Haldane School, told Philipstown.info that the invoices from Sports Media, a company based in Towson, Maryland, are part of a “bogus scam being (conducted) throughout the Hudson Valley.” Invoices received locally are titled “Haldane Central High School 2015 Fall Sports Poster,” which does not exist. Bob Ferris, an investigator with the Putnam County Sheriff’s Department confirmed that the billings are fake. 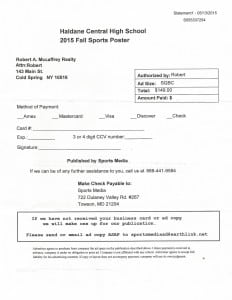 Bob McCaffrey of Robert McCaffrey Realty in Cold Spring said his office has received several of the fake invoices, which request payment of $149. The invoices were received through the mail and included no cover letter or explanation of what the poster is.

Philipstown.info called Sports Media several times but got only a recorded message that said, “Thank you for calling Sports Media, the best advertising choice.” Cunningham said that when he called the company he got a message stating that the number had been disconnected.