Julia Olsen is the Haldane 2015 valedictorian. Her high school career has been impressive. Julia will be attending Vanderbilt University in Nashville, Tennessee, in the fall with a double major in neuroscience and mathematics. After college, she plans to be a scientific researcher, possibly conducting pharmaceutical drug research or determining the neurological basis of diseases. She stated, “I aspire to gain a better understanding of the brain not just to quench my insatiable curiosity, but to benefit society as well.”

During her high school career, Julia took 11 AP classes, four virtual high school classes and calculus II at Pace University. She was on the principal’s list for every quarter in high school, the Academic Hall of Fame for all four years, and was a National Merit Commended Student. Julia received the AP Scholar with Distinction Award, the Marist College 2014 Medal of Science, was a U.S. Presidential Scholars Candidate and also received the U.S. Air Force 2013 Award for Academic Excellence in Math and Science. 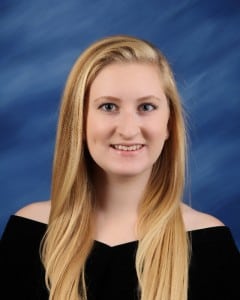 Julia’s extracurricular activities include being president of the National Honor Society and co-president of the International Club, and she also held offices in student government. She has been on the varsity cross-country team since eighth grade and was team captain this year. She also played junior varsity girls’ basketball. Julia was co-president of the concert band and played trombone there and in the jazz band.

She founded a peer tutor club in her freshman year, in which high school students tutored middle school students. She was also a Leo Club member. In fifth grade, Julia was a member of the Destination Imagination (DI) team that won the world championship for middle school at the global competition in Knoxville, Tennessee.

Julia took advantage of numerous special programs. She participated in the Brown University “What’s Up Doc?” pre-college program and the Emory University “Neuroscience?” pre-college workshop. She was involved in the MIT “Splash” program, exploring classes such as Paradoxes in Probability. Fashion design is her main nonacademic passion. She has taken classes at the Fashion Institute of Technology and has also pursued this interest through participating in Cold Spring’s “Fashion as Art” program.

Julia is also a lifeguard and is AED, CPR and first aid certified. She was a volunteer for Project Medshare, where she sorted surplus medical supplies from U.S. hospitals for redistribution to health care facilities in the developing world. She was also an appraiser for Destination Imagination and a tour guide for Cold Spring by Candlelight.

She has been a member of the Science Research program at Haldane since its inception in 2012. She focused primarily on psychology, specifically in the areas of memory and education psychology. One of her long-term goals is to use science to reform the educational system to improve learning for all types of students.

Julia stated, “The unique familial nature of the Haldane community lends itself to a friendly and collaborative atmosphere. Due to the small size of the school, there is ample access to faculty and administrators, who truly care about your success and are willing to go out of their way to help you achieve your goals. This is something that I think all of the students take for granted. The small class sizes at Haldane lead to a more personalized educational experience with the opportunity to forge valuable student-teacher relationships.”