Today’s seniors are emphatically not a sedentary bunch.

With advances in medical care prolonging lifespans, most people reaching retirement age have a lot still ahead, and wish to be fit enough to enjoy it all. Recognizing this shift, the Philipstown Recreation Department has increased the number and frequency of fitness classes aimed specifically for those 62 and older. Regular weekly sessions of chair yoga, Zumba Gold and Fit for Life classes are offered for much of the year, free of charge to Philipstown residents of those ages.

As of now the Zumba and chair yoga sessions are offered in two locations: in the community room at the Chestnut Ridge senior housing complex in Cold Spring and at the Continental Village Clubhouse. The Fit for Life classes have thus far been offered solely at Chestnut Ridge, but demand is coming from Continental Village and hopes remain high to extend a future class there, too.

The sessions are extremely popular and attract people in their 60s through 80s who enjoy the supportive, encouraging class camaraderie while addressing the challenges of the inevitable decrease in flexibility and balance by targeting them head-on, building up strength and stamina in a safe, age-specific way.

A recent session of Fit for Life, conducted by instructor Danielle Pack McCarthy, with assistance from Cecily Hall, dispelled notions that this was just a gentle “exercise-lite” affair. The 15 or so women (yes, the class noticeably lacked the other gender but they would like to welcome more — though many mentioned that one gent, Earl Gunderson, was a regular) moved through a quickly-paced, always attentively conducted series of stretches followed by a mix of cardio, core, and flexibility exercises, each woman at her own pace, with assistance at the ready for anyone who needed it.

This is the second year the class has been offered (all sessions have been filled to capacity) and many people have been taking them since their inception, though anyone can drop by and join in at any time, space dependent. The last session for this spring series is next Monday, June 16, from 11 a.m. to noon at Chestnut Ridge. Newcomers are welcome to try a class out — with no commitment required. Carpools are organized to help those with transportation needs. 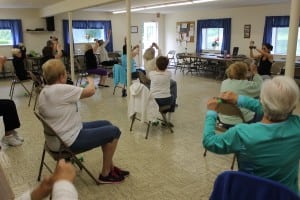 The seniors work with weights during fitness class.

Hall, who observes the classes and attends to anyone needing special assistance, says she’s seen “a lot of strengthening over time. Danielle started teaching this in 2013. It was a new class that she created on her own. Now she has to keep her exercises to keep ahead of them. Everyone in here has a different level of fitness and we’ve worked with a whole range, from people in wheelchairs to those who come in with their [weightlifting] gloves on, ready for action. We do a lot of corrections, and focus on form so no one gets hurt. We also do a lot of work using chairs and tables, particularly for balance and stability.” Hall has contributed to the class with ideas stemming from the boot camp “Power Hour” class she conducts for younger women.

“I took ideas from that class and tailored some of the things into what we’re doing here, always being mindful of injuries, aches and pains and each individual’s level of fitness. It required a lot of research on Danielle’s part, in terms of ‘How can I strengthen their abilities without hurting them?’” Hall said.

With interspersed half-comic, half-serious questions like “Are you still breathing?” Pack McCarthy began with stretches, and continued with other exercises, always setting targeted goals: “I want you to do 12 of these, and hold the last one for 10 seconds.” Moving on to hand weights (most women were using 2-pound weights, all provided by Rec, though some used 4-pounders) a number of choreographed exercises, some targeting specific areas of the body, such as shoulders, were performed, with diagonal paths and twists cutting through the air. 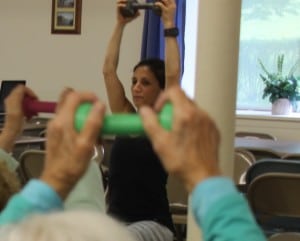 A favorite was the “drink-mixer”: “Shoulders back and down, and ‘pour drinks’ with your weights” was the instruction. Pack McCarthy was always quick to note that should anyone find an exercise difficult to do, they shouldn’t attempt it as is, but rather, as she directed at one point, “If it’s too hard on your knees, modify it to the chair.”

Pack McCarthy is extremely proud of the fitness gains that class members have attained.

“We started out with six or seven repetitions and now we’re up to 15,” Pack McCarthy said. “We do a lot of slow, deliberate, moves, but they’re doing them differently now — two years ago they never had their feet off the ground; they amaze me.”

One participant whispered humorously: “She sneaks in extra counts and thinks we don’t notice!”

The hand-weight exercises were followed by others performed sitting down, then standing up, with leg lifts, knee bends, and coming forward to crunch abs. There were even push-ups — quite a few — done either with the body in a slanted position, against a table, or against a wall, with instructions to “keep your hands wide.”

Asked why she enjoyed working with seniors in particular, Hall said it all started when she began working in a nursing home while still at school.

“My day was fulfilled just by having conversations with the residents,” Hall said. “This is so rewarding because so much is fulfilling to them, anything from a fitness class to a painting class — they are so eager to participate, and so grateful.” 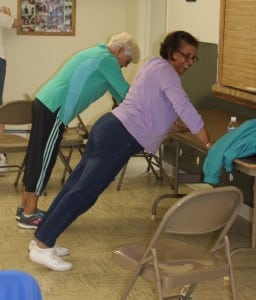 Push-ups, tailored for seniors by using tables and walls, are done each session during fitness for seniors class.

This appreciation was evident in some post-class comments from participants. Eileen Miceli joined “a little over a year ago.” She “didn’t know what would be in store, but this works you out and you can do a little bit more each time. It helps so much with balancing, too.” Two-year veteran Jeannie Depaolis, proudly 83, called herself “a very active person in general, but now I’m slowing down and I get angry at myself so this helps so much, especially with better balance and more flexibility.”

Shirley Norton, who also attends the Zumba classes, called the strength and flexibility she has acquired, “really awesome. There’s also a fellowship, and this gets you out of your house or apartment and gets your blood flowing, which our bodies need.”

With no classes over the summer, to assist participants in continuing with their exercises the instructors made a comprehensive instructional DVD.

Hall is eager to go the extra mile for this group. “It’s going to be me one of these days,” she said. “We want those resources there for us, so we need to make sure they’re in place now. Everyone’s so appreciative.”

For more information on next fall’s class series, contact Philipstown Recreation at 845-424-4618 or visit philipstownrecreation.com.