A screening of the documentary The Many Storeys and Last Days of Thomas Merton will take place at 7 p.m. Sunday, June 21, at the Garrison Institute. The event commemorates the centenary of Merton’s birth and is co-sponsored by the Desmond-Fish Library. A Q-and-A with noted Merton scholars — both of whom appear in the film — author Roger Lipsey, a Garrison native, and Sister Kathleen Deignan, CND (Iona College), will take place immediately following the screening. This event is free and open to the public.

While it may seem odd for this Buddhist-focused institution to celebrate the life of an avowed Catholic monastic and recluse, the film, which explores Merton’s adult life as a Trappist monk at the Abbey of Gethsemani, in Kentucky, does much to answer any questions. 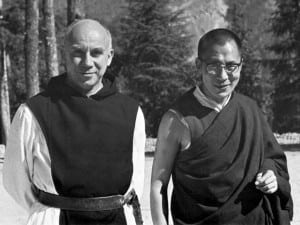 Merton authored more than 70 books of poetry and prose on humanitarian subjects such as spirituality, pacifism, social conscience and comparative religion; his autobiography — The Seven Storey Mountain (1948) — was a genuine blockbuster-bestseller and his thinking and example are the impetus for many of the individual and collective spiritual explorations that defined American culture and consciousness in the 1960s and ’70s.

His monastic life was, however, not without conflict, and the film does much to explore his personal struggles, particularly his relationship with Dom James Fox, Harvard graduate and former IRS auditor and Merton’s abbot at Gethsemani for more than 20 years. Although Merton was a recluse, he had gained substantial recognition outside the monastery; Fox allowed Merton to continue his writing, but theirs was a relationship understandably fraught with tension.

The cover of Lipsey’s book

That relationship is also the primary focus of Lipsey’s latest book, Make Peace Before the Sun Goes Down: The Long Encounter of Thomas Merton and His Abbot, James Fox (Shambhala, 2015). (In addition to Hammarskjöld: A Life, his critically acclaimed biography of the United Nations secretary-general, Lipsey is also author of Angelic Mistakes: The Art of Thomas Merton, an analysis of Merton’s visual explorations and their resonances with Asian — particularly Zen — calligraphy and American abstract expressionism.)

He argues that their struggles and occasionally monumental differences of opinion and manner actually led to mutually creative results, growth, respect, love and admiration. As Lipsey describes it: “Willingness and profound disagreement would often coexist; each had its day of the week”; or more directly, “For Dom James, Father Louis (as Merton was known in the community) was his principal and recurrent dilemma, his unsolved koan.”

A bridge from east to west

Yet despite his significant international reputation, lively intellectual correspondences with many well-known figures of the day, and continuing personal battles with his superiors about not being allowed to travel, Merton eventually achieved a modicum of the peace-in-solitude he sought. It is particularly poignant that his longed-for travels to the spiritual East were finally approved after Dom Fox’s retirement, and would be both entirely fulfilling and ultimately tragic.

The film follows Merton’s 1968 trip to Asia, a circuit that took him to Thailand, India, and Ceylon (now Sri Lanka). Among the highlights were three meetings with His Holiness the (14th) Dalai Lama of Tibet in Dharamsala, India, where he was living in exile. The Dalai Lama is quoted as saying of their meeting that it was Merton who “introduced [him] to the real meaning of the word ‘Christian’.” 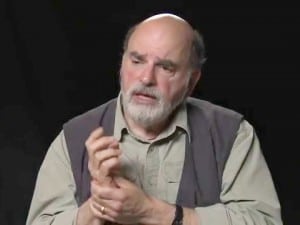 On Dec. 10, 1968, Thomas Merton was accidentally electrocuted as he stepped from the bathtub in his cottage at Suwanganiwas, the Red Cross Center in Samut Prakan, Thailand, having presented a paper at an interfaith conference of monastics there just that morning. It was 27 years to the day since he had entered the Abbey at Gethsemani, where his body was returned for burial.

Visiting the abbey in 1996, the Dalai Lama said: “I always consider myself as one of [Merton’s] Buddhist brothers … for the rest of my life, the impact of meeting him will remain until my last breath.”

Of Merton’s legacy and continuing influence, Lipsey says: “Father Louis, the contemplative and writer, a man of conscience, became in the end a world traveler who drew East and West together. His vision is still unfolding.”

One thought on “Thomas Merton Documentary Screening at Garrison Institute”