There are variegated leaves, striated leaves, delicate fern fronds, lush texture from various evergreens and then around the corner, there’s a vegetable garden in beds terraced into the hill sloping down to the river. Zshawn Sullivan, who describes herself as a foliage person, not a flower person, has surrounded her house on a small, narrow plot of land on the riverfront in Garrison using evergreens as the anchors for discrete landscapes and vegetable plots that she has designed and installed herself.

Her setup gave me gardener envy, but of course it took a lot of work. Everything is at hand where she needs it most. Essential tools are organized in between the vegetable beds. There’s a potting bench, two composting bins, a drip irrigation system for watering and two rain barrels stationed in different areas that access most of the yard. The compactness of the yard makes it easy in some ways but Sullivan has maximized any and all available planting space.

The simple features signal her practical approach and common-sense design. For example, the herb garden is just outside the kitchen door. Because she built it into the slope, it has a retaining wall and all the herbs are right there at waist height for harvest when you need them for cooking. She doesn’t even have to stoop. 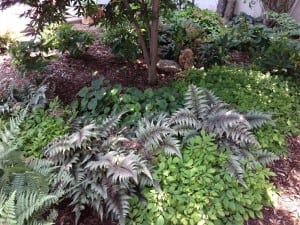 A landscaped area near the front door showcases Sullivan’s love of foliage.

Sullivan, who has lived in this house for 37 years, said that she really started to garden when both her kids were out of high school about 10 years ago. In spite of that, she has some well-established plantings, including arborvitae, redbud, and grey birch.

What struck me about her style was the nicely layered design of the landscape. She doesn’t have a lot of flowers, but she uses them strategically in her vegetable garden to bring in pollinators. She said, “I’m a foliage person more than a flower person. I really like evergreens. I didn’t know about planting 60 percent of your landscape in evergreens until I did the Master Gardener training. That’s what they say. Evergreens are the bones of your landscape.”

In her landscaping, the evergreens of different sizes, colors, and textured needles form the basis for the design. There are arborvitae, yew, Alberta spruce, and an umbrella pine among others. I understood what she meant about their placement being the “bones” that everything else hangs on.

In small vegetable beds, she has sweet and hot peppers already planted and 13 varieties of tomatoes ready to go in. She plants things close together for a bigger harvest. She said she’s behind on the garden, but it’s a typical refrain you’d hear from any gardener, the apology for something that isn’t the way they wanted it, when really they’ve already done more work in the garden during spring than most people do in a year. 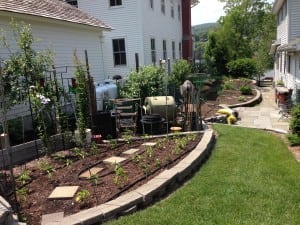 Tidy vegetable beds are terraced into the slope on the side of the house.

Sullivan says that it all starts with the soil and takes great care to manage it. She has a compost tumbler that spins with a handle. After filling, in about three weeks it’s ready to use. She keeps all her materials for composting in another composting barrel that’s sealed to keep pests out. She said, “I use compost that isn’t completely decomposed as mulch after all the plants are in and the more finished compost I put in holes for new plants in the spring.” During the winter she also does worm composting in her basement. Talk about happy soil.

Her yard was all lawn when she started and she has done all the landscaping herself. “I always liked plants and stuff like that,” Sullivan said, “but I’ve really gotten into it since I took the Master Gardener course and had the time to do it.” She’s been a Master Gardener with the Putnam County Cornell Cooperative Extension for nine years. She said the influence of the Master Gardener training made her bolder. “I learned not to be afraid to try things. If it doesn’t work, try something else. It isn’t set in bedrock.”

Sullivan is a planner. Some gardeners (myself included) see a new plant, bring it home, then wander the yard trying to figure out where to put it. Sullivan said she doesn’t do anything until she knows exactly what goes where. “I don’t put things in until I have everything I think I want,” she said. “I don’t want to take things up.”

Her care shows in the harmony of the finished designs. Each landscaped area has it’s own focal point surrounded by plants and shrubs of different heights and flowing foliage, each playing a role in the grander scheme.