Butterfield Realty has applied to the Putnam County Industrial Development Agency (IDA) for “straight-lease financing” up to $5.5 million to support the mixed-use development planned for the former Butterfield Hospital site. A letter from the IDA to Cold Spring Mayor Dave Merandy states that a public hearing on the application is scheduled for 10 a.m. on Monday, June 22, at the Cold Spring Village Hall. The letter was reviewed Tuesday (June 16) at the Village Board meeting.

IDA Chairman Richard Ruchala’s letter indicated that the financing relates only to the two commercial buildings planned as part of the project and can include “ real property tax relief, sales and use tax exemptions, and mortgage recording tax exemption” as well as payment of “certain incidental expenses.”

While the letter states that property tax relief can be granted, Village Clerk Mary Saari told The Paper that Ruchala had told her that the application does not include a request for that form of financial assistance. In a telephone interview with The Paper, Ruchala confirmed that property tax relief is not part of the application. He said it includes a request for sales tax exemption on construction materials for the two buildings as well as sales tax exemption on the purchase of materials for outfitting them. The two buildings would also be exempt from the mortgage recording tax.

Trustee Cathryn Fadde pointed out that developer Paul Guillaro had agreed not to request property tax relief, in meeting of the Village Board on April 1.

Merandy questioned the appropriateness of holding a public hearing on a Monday morning. With tongue planted firmly in cheek he commented, “That’s perfect, everybody will want to be there.” Ruchala however, told The Paper that public hearings on a Monday are not uncommon.

The mayor also wondered about the timing of the application itself, suggesting that it would have made more sense to request funding assistance earlier in the development process. Ruchala told The Paper that Butterfield Realty’s application was submitted in mid-February and revised in March. He also remarked that the Butterfield project has been vetted extensively throughout the lengthy review process. The public hearing, he said, is an opportunity for any new comments from the public. The IDA board will vote on whether or not to approve the Butterfield application on June 23.

The IDA letter and Butterfield Realty’s application can be reviewed at the Village of Cold Spring office during regular business hours. Oral comments can be made at the public hearing.

Deputy Mayor Marie Early provided an update on the Main Street Project, initiated in 2006 to repair the worst sections of sidewalks and curbs along Main Street along with drainage works on Furnace Street and Mountain Avenue. Early said that because 80 percent of the $970,000 project is funded federally, “there are significant steps required, more documentation, reviews, approvals,” the result being a longer schedule and higher cost. The project is administered by the New York State Department of Transportation (DOT). 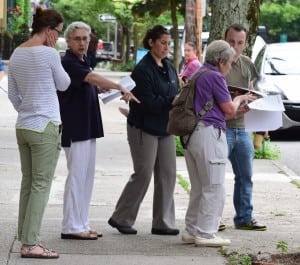 At a May 29 meeting that included DOT officials and CHA, the project’s engineering firm, state representatives indicated that the expenditures and 10-year timeline compare favorably with similar initiatives elsewhere. To date, engineering costs have totaled $204,000 with another $20,000 anticipated. The remaining $746,000 will go to construction and related costs.

Early said that all required sign-offs have been received. A final walk-through this week will mean updating project details. Early said construction will take about three months, commencing early in 2016.

As part of the Mid-Hudson Region, Cold Spring is eligible to compete for a share of $750 million in economic development grants available through New York State’s Consolidated Funding Application (CFA) program. Fadde, who has been attending CFA workshops, said the program is intended to revitalize local economies through projects related to tourism, infrastructure and local character.

She described an “aha moment” at a recent session when Putnam County announced it would pay the local matching share of a successful grant application. Fadde suggested new Main Street lighting as a possible grant project. Acquisition of Bigbelly compacting garbage containers was also discussed. The next step will be for Cold Spring to receive approval to study potential projects in detail for consideration as part of a regional application.

Greg Phillips, superintendent of water and sewers, reported recent complaints of discolored water. The problem, he said, could be due to warm temperatures, which in turn led to increased organic matter in an impoundment area upstream of the treatment facility on Fishkill Road. Flushing the system, a routine procedure that was conducted recently, won’t help in this case, he said. Phillips said he is looking into further chemical treatment. “We’re on it,” he said. “But there aren’t a lot of answers.”

Trustees expressed concern to Building Inspector Bill Bujarski regarding a number of Main Street business issues. Included are increases in the number of sandwich board signs and outside dining areas — both of which are on village property. The recurring problem of shopkeepers displaying wares beyond the permitted 3-foot limit in front of Main Street shops was also highlighted along with an increase in the number of neon signs in store windows. Merandy said that a workshop would be devoted to the issues, several of which were described as matters of public safety.

Cold Spring residents Ethan Timm and Carolyn Bachan were appointed to the Code Update Committee. The volunteer committee is revising village zoning, which dates back to 1968, to bring it into conformity with the 2012 Comprehensive Plan.

Trustee Michael Bowman attended the meeting. Earlier this month his status on the Village Board had been questioned after he and his family moved out of Cold Spring into Nelsonville to assist his mother, who was seriously ill. His mother died on June 5. Merandy said there was a related discussion in executive session prior to Tuesday’s public meeting but no additional information was provided.

Trustee Bowman acknowledged the support he has received, saying, “I want to thank everyone for their patience and for bearing with me … for their thoughts and prayers, for reaching out to me by email and leaving food at my door… I want to publicly thank everyone…”

One thought on “Hearing Monday on Butterfield Sales Tax Relief”