The Giants had beaten the Mets three out of the four games when they had faced each other in the regular season and plenty of runs had been scored. But in the Minors’ championship game played on Saturday, June 13, when they faced each other for the fifth time, it was the Mets who came out on top, winning 2-0. For five innings pitchers from both teams fired goose eggs. Hunter Erickson for the Mets held the Giants hitless allowing just one baserunner over 50 pitches. Julian Ambrose held the Mets hitless allowing only a handful of baserunners over 75 pitches into the fifth. 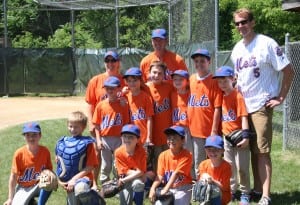 In the top of the sixth inning, pitcher Roy Smith got two quick outs for the Giants. But the Mets were not to be denied. Matteo Cervone hit a triple deep into the left field corner. An outstanding relay throw from Nick Meisner to Julian prevented Matteo from scoring. A single by Hunter drove in the first run of the game. Hunter later stole home to give the Mets an insurance run. Milo Shuk took the mound for the Mets in the bottom of the sixth to seal the victory for the Mets.