Around 1:20 p.m. Monday (June 15), two Putnam County Sheriff’s Department vehicles raced down Main Street past the traffic light in Cold Spring, heading west, red lights flashing. It was a typical call for those who serve with the Sheriff’s Department western Putnam outpost, the substation created in the refurbished Nelsonville firehouse on Main Street.

For Patrol Division Sgt. Michael Szabo, the Carmel-based overseer of the substation, the early afternoon run soon ended: He and a colleague joined the Cold Spring Police Department on the scene of a reported domestic dispute in the Forge Gate apartment complex and then left matters to the village police to resolve. The incident demonstrated both the immediacy of the Sheriff’s Department presence in Philipstown and its interplay with its Cold Spring counterpart. 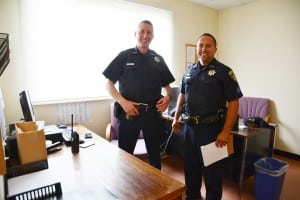 “I know having a substation over here is crucial,” Szabo said, hosting The Paper on a tour of the facility later on Monday afternoon. “It really serves our purpose. This is just a dynamite building for what we’re using it for.”

Szabo said that six deputies now operate from the substation, patrolling Philipstown and Putnam Valley. By spending most of their time in the area they cover, they avoid commuting to and from the department’s headquarters in Carmel, approximately 20 miles east via winding, narrow Route 301. Some of those staffing the substation live in Philipstown or not far away, although the department does not say exactly where, and Szabo said the deputies provide 24-hour protection, in shifts. Likewise, the substation provides quarters for detectives from the Sheriff’s Department DCI – Division of Criminal Investigation. (Two investigators reside in Cold Spring or Nelsonville.)

The sergeant said the substation boasts all the essential facilities, from equipment for evidence collection, fingerprinting, and booking of suspects, including handcuffs, to computers, offices, and conference space for meetings or public boater-safety courses. The garage shelters three cars and a small all-terrain “ranger” vehicle, plus a fast vessel for river rescues and other on-the-water demands. (Along with fulfilling other responsibilities, Szabo heads the Sheriff’s Department Marine Unit.) From vehicles to the boat and arrest-processing items and offices, all appeared in readiness should need arise on an otherwise quiet afternoon. 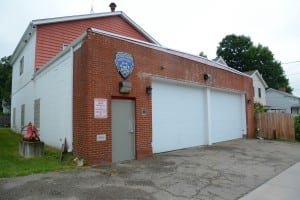 All in all, “the guys have everything we have in Carmel without having to take the hike across 301,” he said. “I want our guys over here to be able to do their job exactly as they do over in Carmel.”

According to Szabo, along with minimizing time-consuming drives and thus increasing efficiency, the substation helps the deputies get more immersed in the community. “Our guys stay over here and they have a link” with the public, as well as with local police and officers from the Department of Environmental Conservation and other jurisdictions on duty in the area, he said.

During a preliminary telephone conversation in April, Undersheriff Peter Convery commented in similar fashion. In western Putnam “we’re trying to be very pro-active this year, especially on the Hudson” River. He outlined the advantages of having more deputies at the substation, including those with homes nearby. “It’s a very good aspect” of what the department is trying to do with law enforcement and “makes for community policing,” Convery said then.

Szabo noted on Monday that “there’s always a car in Philipstown” available and another in Putnam Valley. When staffing permits, two deputies may patrol Philipstown while another goes down to the Lake Peekskill, near the border with Westchester County, he said. Tasks and calls involve the usual mix of police work — security and assistance at public events and responses to routine complaints or simple inquiries by residents, plus handling traffic violations, drug offenses, family arguments, and incidents of violence. “We’ve had murders in Philipstown” over the years, Szabo observed. 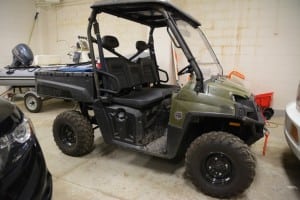 Along with other vehicles, the substation garage houses a small ”ranger” vehicle for use in rough terrain.

He did not have immediate data on how many calls the substation handles. However, in advocating a stronger sheriff’s role last October, Odell referred to 40-plus incidents a day in western Putnam.

Whatever transpires, “we can process all our arrests right here” at the substation, Szabo said. When an alleged crime demands a prompt arraignment, the deputies can call a judge who will respond on an urgent basis — whatever the hour — and meet them at Philipstown Town Hall, site of the town Justice Court.

Such arrangements and the ability to use the substation mean the deputies need not rush to Carmel for arrest-processing and that “we can keep our deputy in service over here” without interruption, Szabo said. Nonetheless, while the deputies assigned to the substation generally serve in Philipstown or Putnam Valley, on occasion one may be called upon to work out of headquarters in Carmel or start a shift there before coming to the substation, Szabo added. 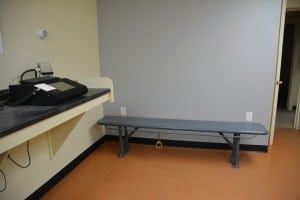 At the substation, handcuffs dangle from a bench, in readiness for possible use in processing a suspect in an arrest.

He said the substation deputies function with considerable autonomy, while maintaining contact with Carmel via Skype and other connections. By and large, “the guys over here don’t need supervision” and are “very independent,” he said. “We find the right guys for the right place.”

Szabo mentioned excellent rapport with the Cold Spring Police Department. “We work very closely with them,” he said. “Our guys couldn’t say enough about the Cold Spring guys.” The Cold Spring police can come to the substation to take fingerprints or go on the computer and they all support one another, he said. “We back them up on calls” and on a case like a felony investigation, “we drop everything for them,” Szabo said.

The question of the best way for Cold Spring to obtain policing surfaced this spring in the village election. Unlike the Town of Philipstown and Nelsonville, which rely on the Sheriff’s Department for law enforcement at no charge, Cold Spring employs police officers working on a part-time basis, at a cost: $416,418, or 15 percent of spending, for fiscal 2015–16. 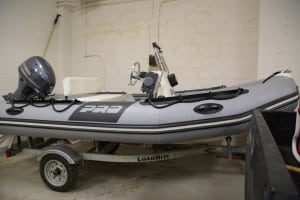 Deputies keep a boat at the substation for use in water-based assignments.

Szabo declined to discuss the Sheriff Department’s ability to take over law enforcement in Cold Spring and referred questions to his superiors. However, based on his experiences with the Cold Spring officers, he did say, “I don’t know why Cold Spring people wouldn’t want their own police.”

Just as the deputies maintain warm relations with other law enforcement agencies, they keep close ties with other government personnel, Szabo said. Citing just one example, he said that in heavy snowstorms the deputies visit the Cold Spring and Philipstown highway garages, conferring with the staff and acting in tandem as needed. “It’s a two-way street,” he said. “Those guys look out for our guys and we look out for them.” Such collaboration and casual friendliness doesn’t exist elsewhere in the county, he said. “This side of the county has a different feel” from the eastern part — a very welcome feel, his comments suggested.

One unresolved issue is payment of rent by the Sheriff’s Department to Nelsonville for use of the old firehouse. As he prepared Nelsonville’s recently adopted 2015-16 budget, Mayor Tom Corless in late April cited the need for the sheriff to start exchanging money for space. The sheriff already picks up the tab for utilities and water. 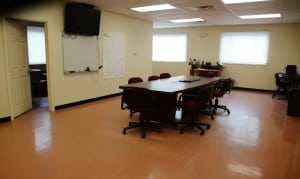 The renovated upstairs of the old Nelsonville firehouse, now the Putnam County Sheriff’s Department substation, contains offices and conference space, among other facilities.

At a Nelsonville Village Board meeting Monday night (June 15), Corless and Trustee Danielle Pack McCarthy reported that efforts to negotiate a lease continue. “We’ve sent a proposal to them and I don’t believe there’s been any response,” said Corless. “We’re kind of stalemated at this point.” Corless noted that Trustee Will Duncan, unable to attend the board meeting, is handling the matter for the village. (Corless himself is in an unusual situation: He is a Sheriff’s Department investigator as well as the mayor of the village seeking rent.)

The Sheriff’s Department has utilized the old firehouse in some form for about 15 years, according to Szabo and Corless. Before the deteriorating interior was renovated, though, the deputies depended on what Szabo described as a cramped Town Hall nook akin to a “little closet” off the Town Board meeting room-Justice Court courtroom. He said that the Sheriff’s Department had used the old firehouse intensively for about four years now and overseen renovations that included putting up drywall, painting, redoing the bathrooms, and installing a sewage-wastewater holding tank, since the firehouse lacks a proper septic system and like Nelsonville overall is not on municipal sewer lines.

The offices looked bright and clean on Monday, as well as quite neat. The deputies themselves tidy it up, Szabo said. “They take pride in it.”