Sometimes it seems as if the stones were always there, with hiking trails built around them. Most people navigating through the forested slopes around us probably haven’t given much thought to the ‘Who put them there?’ question — unless, of course, they are unable to proceed along a path, even if there’s a clearing to do so, due to loose footing or unstable trails to allow forging ahead.

There are periodic construction efforts, some publicly funded, others supported through “Friends of” groups. But, until recently, no cohesive volunteer group existed to increase public access to these lands through sustainable, thoughtful trail construction. 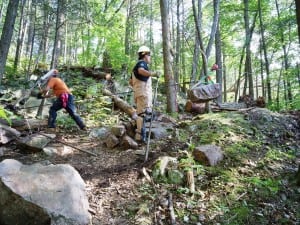 Jolly Rovers at work, ”flying” a stone on a highline.

The Jolly Rovers (JR) have changed all that. A volunteer trail organization specializing in the craft of stonework, the JR group was formed by three men, Bob Brunner, Artie Hidalgo-Espinosa and Chris Ingui, who first met as trail crew volunteers for the NY/NJ Trail Conference, working on the Bear Mountain Trails Project (BMTP). Ingui, who by then had shifted from volunteer to hired employee (as a project manager), noticed, along with his volunteer colleagues, that trail volunteers tended to stick with the project, which entailed a reroute of the Appalachian Trail up Bear Mountain — and with that the installation of more than 1,000 stones to form a pathway. (See Behind the Steps at Bear Mountain for details on a special hike at the site conducted by JR volunteers.)

By the end of 2010, the three began to formalize their notion of a traveling volunteer trail crew, specializing in technical rock and stone work and, early in 2011, the Jolly Rovers came to fruition. Beginning with 12 volunteers, they now number 40 — quite a high number considering the strict training and commitment requirements that are a hallmark of the group. Membership is open to anyone willing to undertake the training and carve out the time, but both are stringent, reflecting the professionalism of the group, and the need to rely on each other for reasons of team safety as they move stones weighing upwards of a thousand pounds on highlines up and down the face of a mountain. 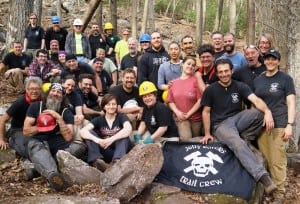 Band of brothers —and sisters — members of the Jolly Rovers trail crew, pictured in their usual habitat: the woods.

After a mandatory orientation meeting, attendance is required at a series of one-day workshops held over five successive weekends …. Upon completing all workshops the student officially becomes a Rover Recruit. At this point, each recruit must attend 10 regular workdays with the Rovers as an apprentice throughout the same calendar year. All recruits are then reviewed by the crew leaders one last time, after which they become Rovers in full.”

Once fully trained, Ingui and his colleagues fully believe that their volunteers are more than capable of doing professional work. “Volunteers in the right environment can do top-class work, and we hold every volunteer to a standard,” Ingui said.

Although female membership was low at the start of the group, women now make up more than a third of the JR. Despite what would appear to be heavy lifting demands, Ingui says “The techniques we use aren’t muscle power; we work smarter, not harder. Any of our members can move 1,000 pounds of rock by themselves, and it’s empowering. People never think they’d be able to take a 4,000-pound boulder, split it into 1,000-pound sections and move them. But it is possible, and you then take that sense of accomplishment wherever you go.” Age isn’t a factor either, with current volunteers ranging from 21 to around 65; 18 is the minimum age.

Despite the difficulties of the work, and the (usual) lack of personal experience in it, there has yet to be a shortage of volunteers — who are often comprised of people who have encountered the JR team at work in the woods and become curious. Perhaps it is the JR’s stated mission that inspires so many: “…We specialize in the creation of stone works such as staircases, retaining walls and other structures using the old world techniques of dry stone construction. Like similar structures from the ancient world that survive to this day, our work aims to continue the legacy of aesthetic and sustainable principles achieved by these early builders. 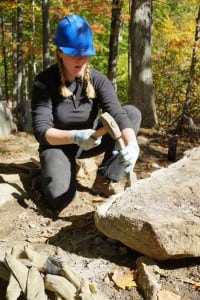 Jolly Rover Valerie Bauer works with a hammer and chisel. A third of the group’s volunteers are women.

Stone survives the test of time, and when constructed properly, structures built with it can be inviting and inspiring, welcoming people that might not otherwise venture into the woods. We believe this increase in accessibility directly affects the well being of a community as well as the preservation of such open space for future generations; after all, the more people are able to identify with open space, the more they will fight to keep it.”

Rather than acting as a deterrent, “setting the bar that high has made it stick,” Ingui said. “We treat our volunteers as family, but also as almost-professionals. Some decide ‘it’s not for me’ but anyone who makes it through all the trainings has created a bond … People show up with no experience in stonework. Ninety-five percent of them have no experience in hard labor; they’re people who sit at desks. This is a growing of skills. When, in our lives, especially with the demands of modern time, can we create with our hands something that will be there for hundreds of years, and put together the creative and the physical? With Jolly Rovers, the stonework gets people interested, but it’s the camaraderie which keeps them there.”

Working locally at first, the JR have seen their services sought in an ever-increasing radius. In the past two months alone they have taken the stonework skills learned on Bear Mountain to improve public space all over the country, working on projects from Texas to Tennessee, and an inquiry recently came in from Australia.

The JR work on both existing trails and create new ones. “In the northeast, so many trails have been in existence for 60 or 70 years,” Ingui explains, “and it’s hard to relocate them in a sustainable way. This includes steep, heavily eroded trails.” Their process begins with partnership, and working with those partners, often government or nonprofit groups, and the combined group makes decisions together. The work of the JR at their home base continues as well, as the Bear Mountain Trails Project is still going on, albeit now in its final stages.

Images courtesy of the Jolly Rovers