Haldane High School’s 120th commencement is now a part of Philipstown history. Just after 10:30 a.m. on Saturday, June 20, 2015, the graduate-elects made the march down from the school for the last time, greeted by wave after wave of applause. With the middle and high school band offering up a stirring rendition of Pomp and Circumstance, the 77 seniors took their seats alongside the iconic school bell that each of them would ring later in the ceremony just before receiving their diplomas.

Once the candidates had settled in, class president Marcus Zimmerman led a salute to the flag accompanied by the Blue Notes’ flawless performance of “The Star Spangled Banner.” 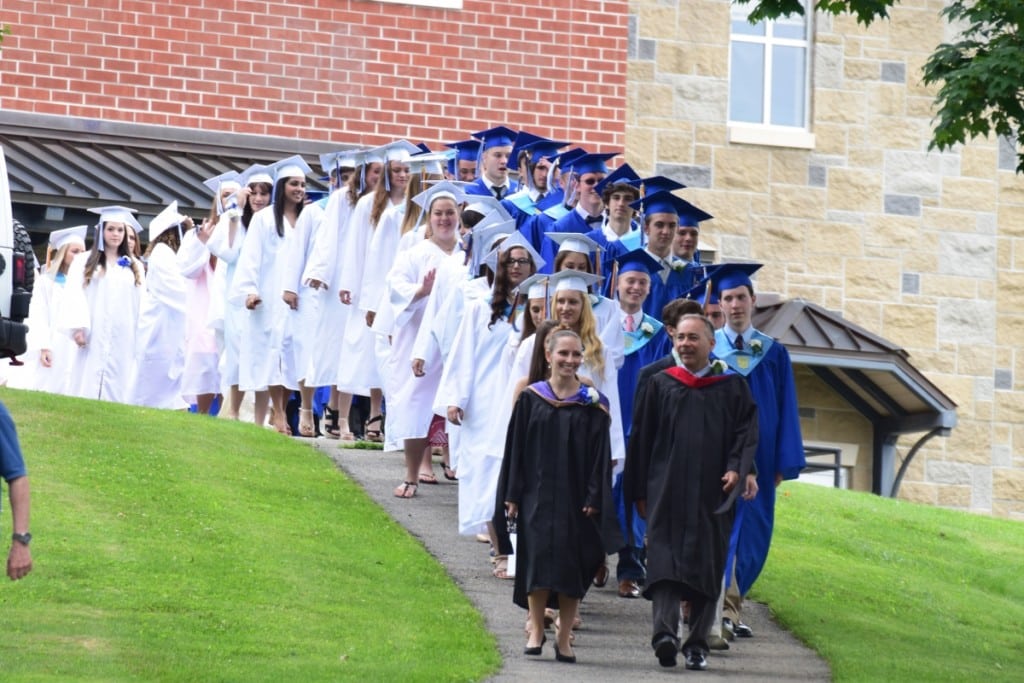 Ceremonies began with the graduates-elect making the walk down from the high school for the last time. Photo by M. Turton

Graduation is by definition a memorable occasion, and this year the weather added to the memories. During what proved to be a 20-minute break, veteran English teacher Eric Richter commented that 2015 marked his 32nd Haldane graduation — and the first to feature a rain delay.

As the skies darkened and the first raindrops fell, principal Brian Alm, who also served as master of ceremonies, didn’t hesitate in calling a halt to proceedings partway through the presentation of more than 30 scholarships and awards. Alm reassured all who had gathered that radar indicated it would be a quick, passing shower. Graduates, family, friends and faculty quickly retreated indoors.

Within little more than 15 minutes, maintenance staff was busy drying hundreds of seats and ceremonies resumed, barely having missed a beat. Returning to the podium, Alm enthusiastically asked the audience, “How’s that for pomp and circumstance?”

Hats off!   Photo by Maggie Benmour

Superintendent of Education Dr. Diana Bowers made it official, announcing that the latest group of Haldane seniors was certified to graduate and then led the presentation of diplomas. As the day’s final graduate, Edmund Fitzgerald was responsible for ringing the bell 15 times. Brian Alm then instructed the new grads that it was time “to turn your tassels.”

Seconds later, true to tradition, caps flew high into the air. After the Blue Notes performed the Haldane Alma Mater it was time for the recessional. The band played the Windermere Overture and the graduates marched out and on to area restaurants, parties — and their future.

Members of the Haldane Class of 1965 also attended the day’s ceremonies, as did school board trustees and staff from the Garrison School.