The Ground updates community radio for the Internet age

Thunderous sounds of rock ’n’ roll blast through the studio of The Ground, Beacon’s new community radio station. The problem is, they’re not coming from the studio itself.

Vicki Vergolina, who co-founded the station with Josh Kogan, is standing in the former assistant principal’s office in the old Beacon High School. This office, once a pit stop for troublemakers on their way to detention, has been the home of the station since January. After months of planning, building, and pre-recording some initial shows, The Ground officially launched with 12 shows earlier this month. But the high school is also home to bakers, art studios, and musicians; and it sounds as if someone directly below Vergolina’s feet is hell bent on mastering John Bonham’s drum fills from Moby Dick in double time and triple volume.

“I guess we’re going to have to do something about that,” says Vergolina. 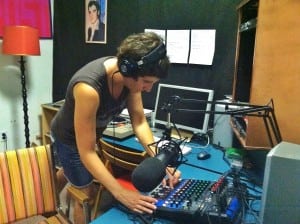 Vicki Vergolina, co-founder of The Ground, fires up the studio. (Photo by B. Cronin)

Over-enthusiastic drummers are just one of the challenges that The Ground has had to overcome. The project began two years ago after Kogan and Vergolina met each other through a mutual friend. Kogan, an environmental engineer and community activist, had a vision of founding a local radio station in Beacon in order to bring the city together and give people a chance to be heard. Vergolina, who has worked in radio since the 1990s, thought it was a great idea. After some fundraising to purchase the equipment, they put out a call for hosts and got a few brave takers.

They’re still looking for hosts (anyone who is interested in having a show should contact the station at [email protected]) and equipment (if you’ve got a working turntable or a rack-mounted CD player you don’t need anymore, let them know), but their dream of broadcasting to Beacon has finally been achieved.

One day, they hope to have an actual terrestrial radio signal. For now, you can listen online at theground.town. There, you can find the archive of all shows that have been recorded so far as well as listen in to the live stream. Even now, a few weeks after the official launch, Kogan and Vergolina are still tinkering with the formats. As Vergolina demonstrates over the blasting drums below, she’s just figured out how hosts can hook their own cell phones into the board in order to take live calls on the air. And they’re planning their first live, remote broadcast on July 7, from Club Draw night at Quinn’s.

“There’s a lot of creative souls here and there’s a lot of people with a lot to talk about,” Vergolina said. “Sometimes they don’t connect. But if we can get some conversations going out there, people will discover some new things. There’s some interesting folks in this town.”

Jennifer Clair agreed. “There’s so much talent here,” Clair said. Clair co-hosts, with her friend Meredith Heuer, a food talk show called Chewing The Fat. “There are so many people willing to invest their own time and their own income into something that doesn’t make money but is instead about making your community richer.”

Clair and Heuer, who are professional culinary instructors and food photographers, respectively, came up with the idea for the show as a way to share their passions with the community.

“Meredith and I decided to do it together because every time we get together we’d just talk about food — different recipes we had just tested, and debunking techniques we’d heard about,” Clair said. “This is a way to force ourselves to go out and learn new things. All of our show topics are very simple and direct like ‘broth’ or ‘greens.’ Next week is GMOs [genetically modified organisms]. So then we spend all week researching it. Radio is pretty seamless with teaching. Radio is like standing in front of a large group of people and expounding on topics, answering questions. It’s basically what I already do all day long.”

For Terry Nelson, host of Mixtape Beacon and founder of the Beacon International Film Festival, The Ground offers a nice change of pace from what he normally does all day. “It’s a great release from working on the film festival, because it’s something that I enjoy, but I’m not in charge of it.”

Nelson grew up with FM radio, which he used to discover new music. “Stations in New York City were playing lots of really diverse music,” he said. “It wasn’t like it is today.” With Mixtape Beacon, Nelson brings back that old-school eclecticness by playing a wide range of styles in between interviews and sharing his own thoughts.

And when he’s not broadcasting, he’s listening.

“The shows are all so different,” he said. “Everyone has their own distinct voice. It’s really good to hear from your neighbors, hear what’s on their mind and what they like to listen to.”

As diverse as the existing 12 shows are, Vergolina would like to hear more. “We’re offering the platform,” she said. “We’re not steering the content because it’s up to the community to do that.

“Come on in, we want all voices. We want all walks of life. We’ll train you and you can come in and just mess around. I’m excited to see what people bring to the table.”

And as she says that, the drums, mercifully, stop and the studio fills with silence.

One thought on “Radio Free Beacon”