For new parents in the Hudson Valley, there are few routines as dependable as the seemingly weekly trips to either Poughkeepsie or Rhinebeck to visit Waddle n Swaddle. Since their first location opened in 2004, the maternity store has proved to be an invaluable resource for those entrenched in the delirious and befuddling first few years of parenting.

More than just a place to shop, Waddle n Swaddle offers lactation workshops, breastfeeding support groups, yoga classes and expert advice on things like navigating the ever-more-complicated world of baby carriers and finding a nursing bra that fits just right. Along the way, they’ve built a loyal, passionate, knowledgeable customer base, those who make long, constant trips up Route 9 with little ones in tow. 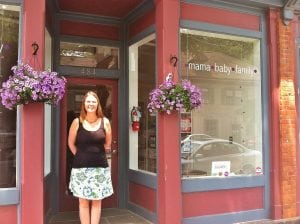 But those customers were in for a surprise when a third branch of the store suddenly appeared overnight on the east end of Beacon’s Main Street, with seemingly no advance notice. Was it for real? Or a hallucination caused by constant sleep deprivation?

Rest assured, the Beacon location is for real. And though it may have appeared out of nowhere, Beacon has long been on founder Jenn Sullivan’s radar. She found the perfect spot, 484 Main St., two years ago. The only problem was that someone else was in it: At the time, the storefront housed the offices for The Roundhouse, which had just opened across the street.

“I always figured that they wouldn’t need these spots forever because I knew the Roundhouse would expand,” Sullivan said. “In my head, two years ago, I said ‘This spot is going to be available someday.’”

Sure enough, after a Mother’s Day meal at Dogwood this past May, Sullivan and her family wandered down Main Street and were shocked to see that the prediction had come true: The Roundhouse had indeed moved their offices and the space was available.

Or was it? She put in a call first thing Monday morning and learned that the space was already spoken for. A few hours later, she got a call back: Well, maybe it wasn’t. When she went back to look at the space again on Tuesday, she knew she had to move fast. “Once I saw the room back there I knew it was perfect,” she said, pointing to the sizeable space in the back of the store divided by a set of doors. She knew that without the divided space, she wouldn’t be able to hold workshops and classes. “It’s hard to find a space like this with so much room in the back. It’s like Rhinebeck; all the storefronts are old and narrow.”

Sullivan signed a lease that Friday and opened three weeks later. “It’s going to be a chaotic month while I play catch-up,” she said. “I didn’t expect the community response to be so overwhelming. Already people are coming in and asking when classes will start and I tell them “I haven’t even had a chance to buy folding chairs yet!”

Essentials for mama and baby

The space may be chair-free for now, but Sullivan has already confirmed that there will be playgroups, breastfeeding support groups, a chiropractor, an acupuncturist, prenatal yoga, mom and baby yoga, and a lactation consultant. In the meantime, the storefront is fully stocked with a variety of products, including an extensive line of baby carriers. The carriers are a must, as they’re the reason why the store exists in the first place.

When Sullivan was a new mom in 2004, she ordered a baby carrier online and when it arrived she couldn’t figure out how to use it and didn’t know who to ask for help. “I was driving down to the city, going to stores there with a ring sling baby carrier, and most people didn’t even know what that was,” she recalled. “I thought, ‘There’s got to be a better system.’ So our focus has always been helping people use products that are kind of unusual. People like to go to a place where they can touch stuff, be heard, and talk to other people.”

Helping new parents figure out baby carriers may have been what endeared the store to so many in the first place — ask anyone who has attempted to squeeze a crying baby into one of those things while wearing it and trying to read the instruction manual at the same time — but customers keep coming back because they also know that they’ll find things there that they can’t find anywhere else.

“It’s the organic thing, the small batch thing,” she said. “Some people don’t want big production items. They want a unique, high-quality item that they can use for their first kid and then still be able to use it for their next two kids. It’s not fluff, but it’s good quality. You’re not buying a boutique outfit that’s only going to fit for three weeks.”

No matter how many kids shoppers have had, typical parents will always face new questions and new problems. Which is why Sullivan’s staff is made up of moms who have all used the products themselves, making them uniquely qualified. Though there’s one important exception.

“We have one college student on staff,” Sullivan said. “But that’s because when all of our kids get the same virus because they all play together, we need someone who can pull through.”