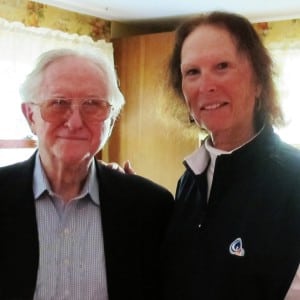 Journalist Neil Hickey and Dr. Renée Richards, both Kent residents, will have a Conversation on the Occasion of their Recent Books at Arts on the Lake, at 8 p.m. on Saturday, June 27.

In his career as a premier journalist, Hickey interviewed five U. S. presidents, spent a day with Bob Dylan, traveled Europe with Henry Kissinger and walked through a minefield in the war to liberate Kuwait. He was New York bureau chief of TV Guide, and is a former editor of the Columbia Journalism Review.

Richards’ life as the first athlete to play successfully in professional sports as a transsexual and then to coach tennis champion Martina Navratilova returned to the news as a result of Caitlyn Jenner. Although as a noted eye surgeon she has written a textbook on eye muscle surgery, Richards is better known for two autobiographies, Second Serve and No Way Renée.

Hickey brought out Adventures in the Scribblers Trade this year and Richards released Spy Night & Other Memories last year.

As Hickey reports in Scribblers Trade, they met as neighbors in Kent and have played tennis together for 20 years.

The evening, to include Q-and-A and signings, is open to the community with no charge. Reservations to [email protected] or 845-228-2685 are encouraged. AotL is located in the Lake Carmel Arts Center, 640 Route 52, Kent Lakes.