A year after attempts to consolidate some functions of Philipstown’s three municipalities foundered over opposition in Cold Spring, the Town of Philipstown and Village of Nelsonville have revived the idea — as a two-government initiative.

The resurrection began at meetings of the Philipstown Town Board on June 10 and the Nelsonville Village Board this past Monday, June 15, when both boards expressed determination to at least explore the possibilities of combining their justice courts and building departments.

Their move occurred as New York State deadlines loomed this month for municipalities’ submission of “government efficiency” plans. The state requires that for taxpayers in local jurisdictions to obtain future tax rebates, their jurisdictions — towns, villages, school districts, and others — must not only continue to meet the tax-hike cap but outline ways to streamline local government by paring costs, typically by sharing or consolidating services, and get their plans approved by the New York State Budget Division.

However, according to Mayor Tom Corless, Nelsonville does not intend to file an efficiency plan, even as it pursues limited consolidation with the town.

The Town Board and Nelsonville Trustee Danielle Pack McCarthy reopened the consolidation discussion at a Town Board workshop June 10 (which followed a contentious Town Board session on a South Mountain Pass drainage project).

Court consolidation has been discussed sporadically at the town level over the last several years. 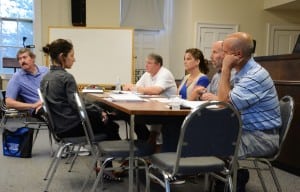 Supervisor Richard Shea noted that “there are state funds for consolidation of the courts, specifically. The courts are a little bit easier than the building departments” to combine. However, he said lack of an adequate chamber for an expanded court could prevent judicial consolidation very soon. At present the town Justice Court uses the Town Hall second-floor meeting room, accessible only by steep stairs. Shea also cited a need for Nelsonville to provide data on the volume of court cases it handles, to allow a thorough analysis.

“It seems like [the building department] would be an easy one for us to take over,” Shea said. He pointed out that the town inspector already fills in for his vacationing Cold Spring and Nelsonville counterparts as needed. Nonetheless, Shea added, the different town and village zoning codes could complicate the administration of a joint department.

Van Tassel suggested that if the town building department absorbed the Nelsonville operation, Donohue could apply the Nelsonville law within Nelsonville boundaries and work with officials there. “You’d retain your own zoning,” he told Pack McCarthy. “You wouldn’t eliminate your zoning board.”

Shea also said that the amount of taxpayer money saved by a building department consolidation might be minimal and that if the two governments want to proceed, “it’s going to take money to do it; it’s going to take time to do it.” Nonetheless, he observed that New York State offices probably could help.

Councilor Nancy Montgomery mentioned the possibility of a state grant to fund a consolidation feasibility study. “This could be a perfect project for it,” she said.

Despite his questions, Shea concluded that “it’s worth furthering the discussion” and concurred on the merits of moving forward. Van Tassel volunteered to serve as the liaison to Nelsonville for that purpose and his colleagues accepted his offer. He and Pack McCarthy likewise agreed to confer with Donohue.

Five days later, the Nelsonville Village Board weighed in. Given the absence of Trustee Will Duncan, the discussion consisted of a conversation between Pack McCarthy and Corless.

Pack McCarthy explained that steps so far involved “just trying to put everything that’s been talked about [back] on the table.” Both governments must “crunch some numbers and see if it works for both of us,” she said.

Corless endorsed the fact-finding. “We’ve hammered that around a few different times, a few different avenues — what’s going to work for us” in a consolidation, he recalled. “A lot of times there was never any finite numbers on what it was going to do for us, or not do for us.”

The meeting also touched on the related matter of government efficiency plans. To help municipalities address state demands and cut costs, through its Local Government Efficiency Program New York offers “technical assistance and competitive grants to local governments for the development of projects that will achieve savings and improve municipal efficiency through shared services, cooperative agreements, mergers, consolidations and dissolutions,” according to its website. It adds that Albany remains “committed to working with local governments to control costs while maintaining quality service[s].”

Corless reported that the state extended a June 1 deadline to allow Nelsonville until June 20 to file efficiency plan materials. But he said the village saw no need to do so. “It appears it doesn’t really do anything for us to apply. I don’t know where we’re possibly going to save that money,” he said. “There’s no indication that we’re aware of that says we have to file anything,” anyhow. If failure to participate had repercussions, “we could probably find a way to come up with something,” Corless said. “But since it doesn’t, the $5 it might save us is a lot of work for nothing. So we’re just going to let that ride.”