Fighting fire as one

Gary Van Voorhis may have only held the position of Beacon fire chief for less than two years, but he’s no stranger to the area.

Van Voorhis was born in Fishkill, graduated from John Jay High School and Dutchess Community College, and then moved to the Midwest to embark on a 30-year career as a firefighter. But when he heard of the opening in Beacon for a chief, he knew it was time to come back.

“I still have family in the area; my sister lives in Beacon,” he said. “I still wanted to be active, so I saw this as another challenge in my journey. They’ve had excellent volunteer firefighter chiefs, but I’m the first career firefighter chief they’ve had. I think they were looking for someone who knew how to run it like a business.”

That means keeping an eye on the bottom line, and how best to use the department’s budget to ensure its long-term health. While the Beacon Fire Department currently ranks as the fastest in Dutchess County — it responds to 90 percent of its 1,600 annual calls in four minutes or less — that responsiveness comes at a price. 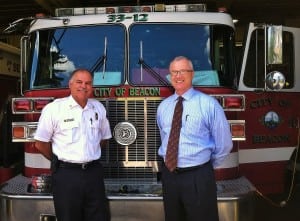 The Beacon Fire Department currently consists of 13 career firefighters and approximately 60 volunteer firefighters spread out across three different firehouses: the Beacon Engine station on East Main, the Mase Hook and Ladder station on Main Street, and the Lewis Tompkins Hose station on South Avenue. Both the Beacon Engine and the Mase Hook and Ladder stations are over 100 years old, relics from a time when the engines were drawn by horses and the now defunct Matteawan Railroad split the town in two.

With response times being understandably slower back then, there was a need for several firehouses spread out across town, and the factories that powered Beacon’s economy were happy to help foot the bills to keep the stations running in order to ensure that their businesses would be attended to quickly in the case of a fire.

Today, the factories are homes to condos and hotel rooms. The Matteawan Railroad is silent and overgrown with weeds. And the idea of a five-square-mile city like Beacon having three separate fire companies is viewed as an anomaly. “To financially maintain these three structures is a big burden on the city,” explained Van Voorhis. “There hasn’t been the proper upkeep in years and years.”

There are also the psychological ramifications of having the city’s firefighters spread thin across town. By regulation, each firehouse must have at least one career firefighter in it at all times. But with the numbers of volunteers present at each house fluctuating at any given time, there are sometimes long, lonely stretches in which the East Main and Main Street houses have just three firefighters in each. “No one wants to be alone,” said Van Voorhis.

The city has undertaken three studies since 2006 in order to analyze the current fire department (all of which can be found online at cityofbeacon.org). Together, they make the case for consolidating the city’s three houses into a new centrally located house that would serve the entire city with very little change in response times. Both Van Voorhis and City Administrator Anthony Ruggiero agree with the findings.

“Building a new central station at a new location works for two reasons,” explained Ruggiero. “One, I don’t know if we can adequately expand any of the existing firehouses so that it could fit all the companies. And the volunteer companies have long traditions, and they’re each very loyal to their respective houses. So if you combine existing companies into an existing house, it’s like taking one family and moving them in with another family. It might be easier to move all the families into a new house so they can all say, ‘This is ours,’ instead of ‘This is mine.’

Van Voorhis noted that the city of Hudson faced a similar situation and was able to successfully merge existing companies with long and storied histories into a new, shared firehouse. “There’s ways we can do this by talking to architects and by looking at other buildings that have done this,” he said. “Each company would get their own office, storage facility, and a place for them to display their history.”

The most recent study, from 2014, suggests the lot next to the running track on the corner of Verplanck Avenue and Cannon Street, and some of the land currently owned by the Elks Club on the corner of Wolcott Avenue and Tioronda Avenue, as optimal locations. (In the event the Elks Club land is chosen, the Elks have already expressed a willingness to sell the land to the city.)

The location of a new firehouse is just one of the things still to be decided. First, the city must decide whether or not to go through with the consolidation, what the timetable would be, and how much work needs to be done to the existing three houses to keep them in good working order in the meantime. These topics will be discussed at a workshop session of the City Council on July 6, and both Van Voorhis and Ruggiero are looking forward to a plan of action being decided so that they can take the next steps.

Both men are optimistic as to what is to come. As Van Voorhis notes, the city has been successfully making similar difficult decisions for years, which Beacon’s current prosperity is a testament to.

“It’s a happy, positive city,” he said. “There’s a lot of exciting projects coming up. And they don’t have any chain stores. That’s all in the planning. I think Beacon has done a wonderful job in implementing their plan. That’s a big change from when I was here 30 years ago.”