Demolition-related efforts began at the former Butterfield Hospital in Cold Spring this week, with the removal of old furniture and miscellaneous items from the building prior to razing to make way for the new multi-use complex planned for the site.

Wednesday afternoon (June 24), two men worked from open upper windows, facing Paulding Avenue, as debris began to amass outside on the ground and a laden truck pulled out from the driveway onto Route 9D. 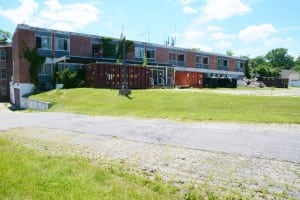 Trash containers line the exterior of the old Butterfield  Hospital as two men work from the third window from the left on the upper floor. Photo by L.S. Armstrong

Under Paul Guillaro of Butterfield Realty LLC, the owner, the multi-acre site is being redeveloped to contain condominium homes for retiree-age residents; two retail-cum-office buildings, one with likely government-related tenancy (such as a senior citizens center) in part, and three single-family homes.

Cold Spring Building Inspector Bill Bujarski told Philipstown.info Wednesday that Guillaro’s team has a permit to take down the building and is in the initial phase of a two- or three-phase wrecking process. “They’ve got to clear out, clean up, and then they’ve got to demolish,” he said. In the first day or so of work, they removed file cabinets, beds, lockers and more, he noted.

After the clearing-out ends, interior hazard mitigation (such as asbestos abatement) will occur, preceding the actual dismantling of the structure, he explained. Likewise, a fence will go up around the work area, to prevent danger to the public during demolition, but as much as possible of the green lawn area will remain open, Bujarski observed. The large copper beech tree will get its own fence around it to protect it, he added. 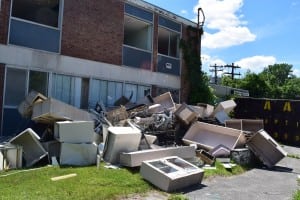 Workers have begun emptying the former Butterfield Hospital of its contents, including desks, cabinets, file drawers and other furnishings. Photo by M. Turton

Bujarski lauded Guillaro and his team for their conduct. “They’ve been extremely cooperative,” he said. “They’re working with me every step of the way” as they proceed and “want to keep it as quiet and clean as possible.”

He predicted the actual demolition of the structure will get underway in July and was uncertain how long it might take.

“We expect asbestos remediation to be completed by the first week of July and the demolition from that point to run to the second week of December,” Guillaro said Thursday (June 25).

On Sunday (June 28), Guillaro provided an update, saying that demolition will be completed by the second week of September.

One thought on “Demolition Work Gets Underway at Butterfield Hospital”