Concerns raised at a public hearing held in Cold Spring on Monday (June 22) have resulted in the postponement of a scheduled meeting of the Putnam County Industrial Development Agency (PCIDA) and an extension of the deadline for public comment on Butterfield Realty’s application for “straight-lease financing” of up to $5.5 million in support of part of the mixed-use development planned for the former Butterfield Hospital site.

The PCIDA board was to meet and vote on the proposed financing on June 23, with public comment required no later than 5 p.m. on June 22 — the same day as the hearing. That, along with the fact that the hearing was held on a Monday morning, prompted objections from Cold Spring Mayor Dave Merandy, Philipstown Supervisor Richard Shea and others among the roughly 20 local residents at the hearing. Attendees also voiced concern about the lack of notice in local media. The hearing had been advertised in the Journal News but not in The Paper or the Putnam County News and Recorder.

The day after the hearing, the PCIDA meeting date was pushed back to Tuesday, July 7. Public comments can be now submitted up until the close of business on Friday, July 3. 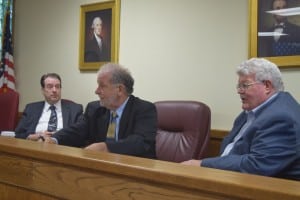 The proposed financing would give developer Paul Guillaro relief from paying sales tax on building materials associated with constructing and outfitting the two commercial buildings at Butterfield. In addition, the developer would be exempt from paying the mortgage recording tax and other “incidental expenses.” In the application, sales tax was estimated at $266,534 and the mortgage recording tax at $72,210.

During the public hearing, and prior to it in conversations with both Village Clerk Mary Saari and The Paper, PCIDA Chairman Richard Ruchala emphasized that even though his form letter announcing the public hearing included a statement that relief from property tax could be part of such a financial package, the developer had not requested it — either in the original application filed in February or in revisions submitted in March.

Ruchala stressed that once the application was submitted without a request for tax relief, it could not be added later. At the hearing, he expressed surprise that the developer had not asked for property tax relief; however, in April 2014, Guillaro had told the Village Board he would not make such a request.

Under straight-lease financing, PCIDA would assume the title of the two commercial buildings, which will total approximately 31,000 square feet, as well as the land beneath them, leasing both back to the developer at a nominal fee for the 10-year term of the agreement. During that time, Butterfield Realty would make payments in lieu of taxes (PILOT) identical to the property tax assessed on the property. The developer would be exempt from paying the 1.05 percent mortgage recording tax, half of which would normally go to the village. Incidental expenses being waived under the agreement would include filing and legal fees.

In March 2014, New York State Comptroller Thomas P. DiNapoli released audit reports critical of IDAs in Dutchess, Greene and Putnam counties, stating that the agencies had “granted questionable tax incentives and failed to enforce job creation goals.” The audit singled out the PCIDA for having failed “to include necessary information for determining if the projects would be beneficial to taxpayers” as well as for “not adequately monitoring the performance of businesses receiving benefits to determine if employment projections or other goals were being met.”

Ruchala told The Paper that the PCIDA took corrective action in the wake of the audit. He said that while the PCIDA board met only three times in 2013, it convened 15 times the following year, largely to deal with issues raised in the audit. “It was actually a very good audit,” Ruchala said. “I dealt with it personally … and the board was incredible … in changing policies and the way we do business” in order to address concerns raised by the state comptroller.

New York State established IDAs in 1969. The Putnam County IDA was created in 1995 with a mission to “increase the present industrial tax base in Putnam County and help attract clean, environmentally sensitive manufacturing and industrial interests to the county.” It is governed by a seven-member board of directors that includes, in addition to Ruchala, Raymond Ruyack, Vincent Murphy, Kevin Bailey, Maureen McLaughlin, Bill Nulk and Philipstown resident and lawyer Randall Chiera. Nulk attended the June 22 public hearing along with PCIDA attorney Robert Schneider.

The PCIDA meeting rescheduled for Tuesday, July 7, at 5 p.m. will be held in the auditorium at the Donald B. Smith Campus located at 112 Old Route 6 in Carmel. Public comments must be received by close of business on Friday, July 3. Comments can be mailed to Richard Ruchala, Chairman, Putnam County IDA, 12 Main St., No. 263, Brewster, NY 10509, or emailed to him at [email protected]

Documents related to the application are available for review at the Cold Spring Village Hall during regular office hours.

At the hearing, Rucahala praised Cold Spring residents for being so actively involved in their community. He told The Paper that more people attended the June 22 meeting at Village Hall than had attended all other PCIDA public hearings combined since 1995.

One thought on “IDA Delays Vote on Butterfield”