Workshop will look at Main Street

The Village of Cold Spring has chosen a new law firm to represent its interests. After a final interview in executive session just prior to their regular meeting on Tuesday, June 23, trustees voted to hire the firm of Catania, Mahon, Milligram and Rider PLLC as legal counsel. The firm has offices in Fishkill and Newburgh. John W. Furst, an associate who joined the group in 2014, will handle Cold Spring’s legal affairs. Furst, a graduate of the Pace University Law School, has more than 14 years’ experience in land use, zoning, municipal, environmental and real estate law. He replaces William Florence, who has served as interim legal counsel since January of this year.

Mayor Dave Merandy said that once the draft contract is reviewed, including the proposed fee structure, the agreement will be finalized, likely early next week.

The poor state of repair of village sidewalks has raised concerns for years, most notably over public safety. Fractured pavement and uneven walking surfaces have caused a number of pedestrians to trip and fall, at times causing serious injury. Such incidents not only pose a hazard to residents and visitors, they also create liability issues for the Village of Cold Spring. The Main Street Project, nearly 10 years in the making, is finally scheduled to begin early next year and aims to fix at least the worst sections of the walks.

The Village Board is now about to focus on other sidewalk-related issues, some of which trustees believe might also be putting pedestrians at risk. At a recent Village Board meeting, Building Inspector Bill Bujarski reviewed a number of potential code violations along the walkways, including inappropriate signage, outdoor dining areas, and shops taking up more space than law permits.

Bujarski was asked to document the infractions, including applicable sections of the code, and he submitted that report at Tuesday’s meeting. Merandy asked trustees to review the document in preparation for a workshop that will delve into the report in detail, and then led a general discussion of some of the issues it raises.

Trustee Fran Murphy pointed out that a letter prepared last year by then Village Attorney Michael Liguori, outlining how businesses can and cannot use village sidewalks, was never distributed after Liguori resigned. The Silver Spoon Restaurant was also discussed. The porch it uses as an outdoor dining area was and may still be owned by the Village of Cold Spring, a situation that creates a liability issue for the municipality.

Liguori was working on sale of the porch to the restaurant, essentially for the legal costs involved, however it is not clear whether or not the transaction was ever finalized. And the Silver Spoon is not unique. In past Village Board discussions, it has been pointed out that several businesses and numerous residences also occupy porches or stoops owned by the village. 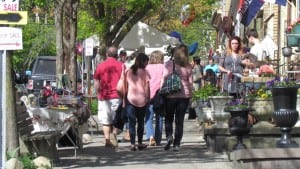 When the Cold Spring is busy, obstructions on sidewalks could pose a problem. File photo by M. Turton

Trustees also commented that the number of outdoor dining areas has increased in recent times, possibly in violation of the code and further raising the liability issue — especially in cases where the village owns the land.

Signage along Main Street was also discussed. There seems to be a consensus among trustees that the number of “sandwich board” signs along Main Street has increased, again a possible code violation and safety hazard since they can obstruct the flow of pedestrian traffic. Use of neon signs in store windows, another violation, has also increased. The proliferation of signs at the corner of Main Street and Chestnut Street has been identified as an issue a number of times.

Signage poses a thorny challenge for the board, since a section of the Village Code dealing with signage was struck down by a federal appeals court in 2005 after resident Donald Lusk successfully sued the village, arguing that the law infringed upon his right to free speech. That section of the code has never been rewritten, leaving the village unable to enforce part of its sign policy. The Code Update Committee is revising the code, but a new signage law is still months away.

The display of store merchandise out on sidewalks, beyond the 3-foot legal limit, is also seen as a problem. Merandy pointed out that because the width of sidewalks varies up and down Main Street, a different approach might be more effective. He suggested that rather than having the law state that goods cannot be displayed more than 3 feet from a storefront, it could instead require that sidewalks be left unobstructed to a consistent width. Such a change might also help remedy other potential obstructions posed by sandwich board signs and outdoor dining areas. 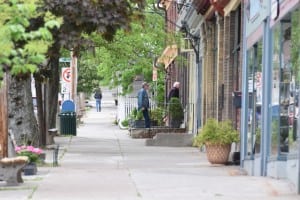 When Cold Spring is quiet there is plenty of room for pedestrians. File photo by M. Turton

Coincidentally, Ray DiFrancesco, who along with his nephew Frank operates Whistling Willie’s American Grill at the corner of Main Street and Morris Avenue, attended the meeting to address concerns raised at a previous meeting regarding that restaurant’s use of its sidewalk. A number of planters, a sandwich board sign and a hostess stand had all been placed out on the sidewalk.

DiFrancesco admitted that while the sidewalks in front of his restaurant are among the widest in the village, “I have to be honest with you, we were taking up a lot of room.” He said the sandwich board sign and hostess station have now been moved back off the sidewalk. “We don’t want to break any laws,” he said. “Just communicate with us.” DiFrancesco added that even with the planters in place, the sidewalk is about 9 feet wide, leaving “plenty of room” for pedestrians.

Merandy said that comments made at previous meetings were not directed solely at Whistling Willie’s but rather addressed sidewalk issues at a number of businesses up and down Main Street.

No date was set for the Main Street workshop.