Nelsonville store specializes in both custom framing and ‘antique papers’

Crammed with old prints to flip through, boxes of postcards to examine and the promise of some hidden, historic, treasure in one of its nooks and crannies, Nelsonville’s Hudson Rogue is the kind of place people love to stumble upon. Except for one thing: Most of the visitors to the framing and print store arrive there intentionally, not through happenstance.

The shop, located in its National Register of Historic Places storefront for over 40 years now, has a steady clientele made up of loyal customers and those they refer. With little advertising and virtually no online presence, there is no shortage of clientele, according to owner Richard Saunders, who began the business after first renting the upstairs floor of the house next door and then, a couple of years later, the rest of the premises. 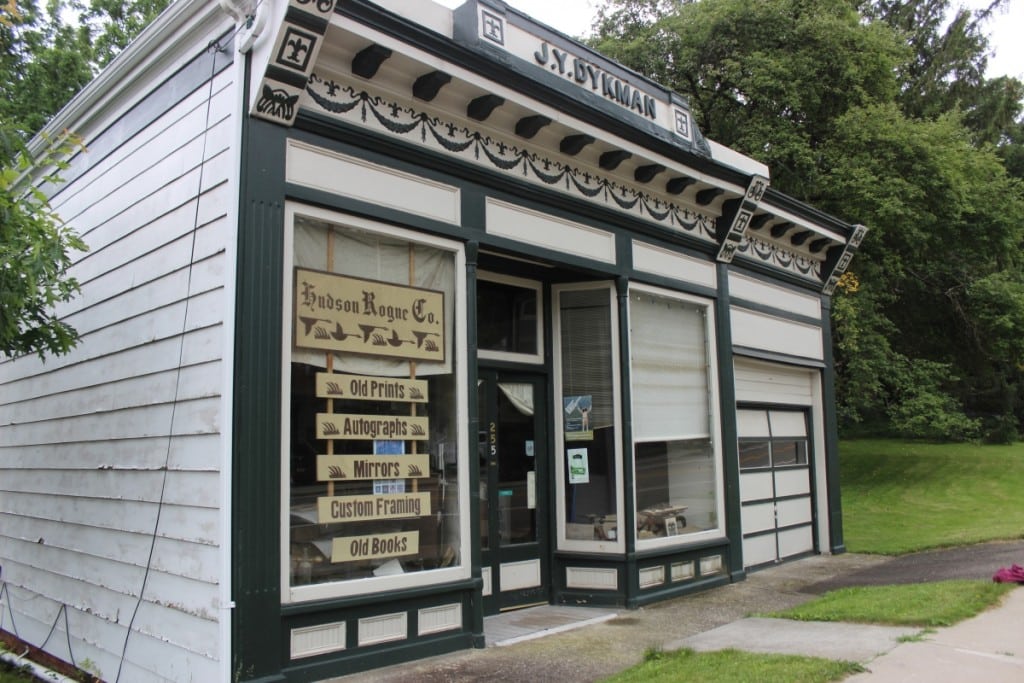 The eye-catching facade of Hudson Rogue, complete with original signage at the top

Those premises, built in 1897, had, until that time, never left the Dykman family. The patriarch, James Y. Dykman, built it, and his name still graces the top of the distinctive, green and white façade made from pressed tin, possibly, said Saunders, from the foundry. It originally operated as a feed and grain general store and the original counter is still in place today, now used many times a day as a “let’s try this out” setting for the large selection of mattes and frames that are the mainstay of the current business.

Following its use as a general store, the shop sold automotive supplies and even had a spell as a violin repair business. During Dykman’s time there he maintained a two cars — a Model T and a 1937 Packard — as well as a boat, in the expansive back quarters behind the shop, now used as storage. Dykman’s grandson, James Dykman Bushnell (who is still alive, at 92, according to Saunders), finally sold the two adjacent properties to Saunders, despite a sentimental attachment to it, 20 years after Saunders first rented it.

Saunders freely admits that he didn’t know what he was doing when he first opened Hudson Rogue (the name comes from a nickname given to Saunders by his father-in-law years ago). He grew up in Cornwall and discovered Cold Spring when he and his wife, who was then working in New York City, decided to make her commute a bit easier by relocating to the eastern side of the river. 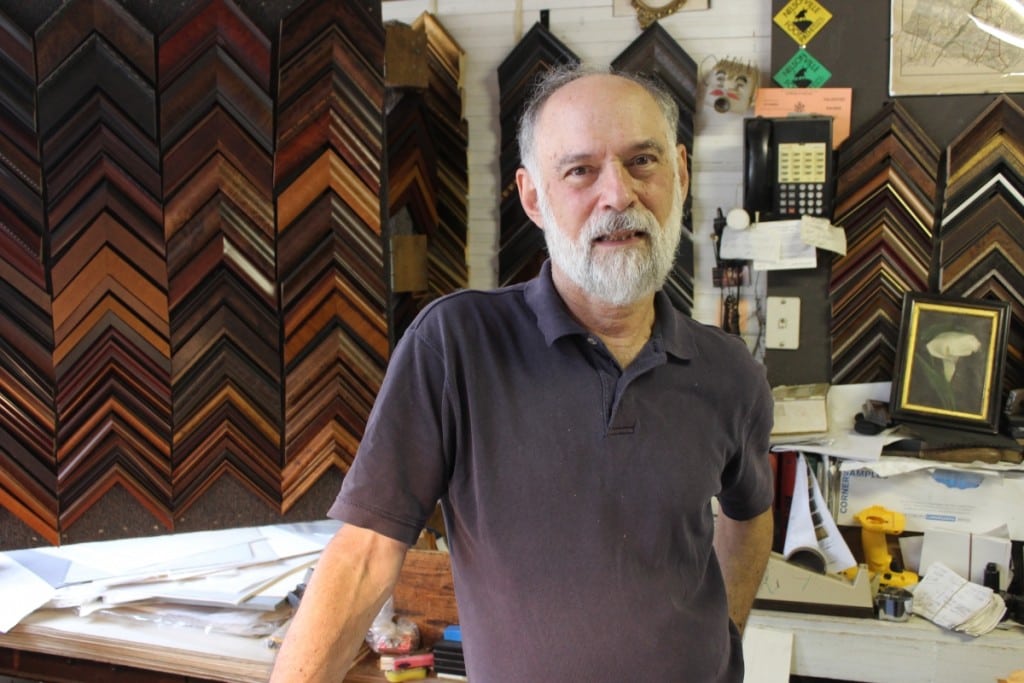 “I learned about what I do completely by accident,” Saunders recalled. “After college I got a job selling socks and undies at B. Altman [the now-shuttered department store in Manhattan], as a ‘Christmas extra’. They had a prints gallery there, and a girl who was working there as an assistant buyer was killed in a motorcycle accident. I applied for the job and learned as I went along. I always loved the Hudson River and became friendly with a print dealer who got me interested in Hudson River prints, so really it was the combination of working at Altman’s and this friendship which resulted in all of this. But at the beginning I didn’t know who would come in. Luckily, my wife worked for TWA at that time and was basically supporting us. In fact, in 1970–71 I took a couple of years out to teach flying, at Teterboro Airport, something not lucrative at all, then came back to this. It was pretty slow for awhile but I built up a clientele over the years, and now it’s very steady.” 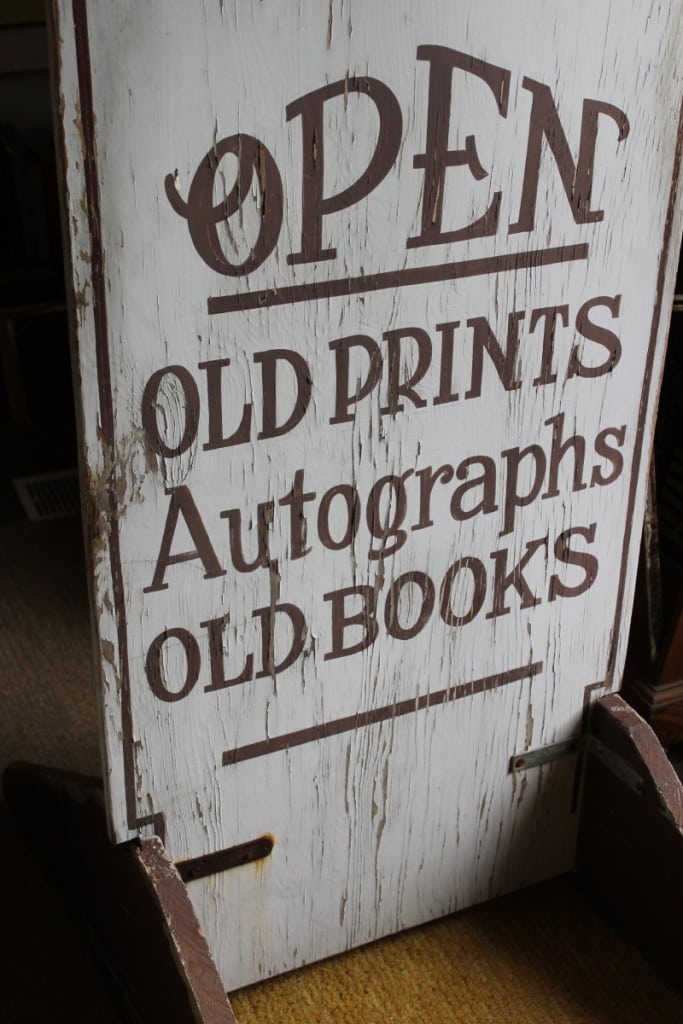 When Saunders began, he used to hand-finish all of the frames, sanding and gilding them. Eventually he decided to stop doing this work because of health concerns from the chemicals used. He then found a Peekskill-based supplier of “really nice frames, so I can offer a much larger variety to people.” The framing is a large part of Hudson Rogue’s business, and Saunders has done everything from a display of a turkey tail to “customers’ own artwork, things from the attic, family heirlooms and this week’s graduation photos and diplomas,” he related.

With his expertise in the field, at times Saunders has to break some bad news to people, letting them know that what they thought was quite valuable, isn’t. At other times he is amazed by what is brought in, telling of a “guy who came in with a large napkin, from a well-known cruise line. His father had been a porter on the ship, which was cruising to South America. On the boat were Walt Disney and all his top artists, and each one had drawn their specialty — Mickey Mouse, Snow White, everything — and signed their name under their drawing. It was priceless and just incredible. I never know what someone is going to walk in the door with.”

Upon walking in that door, one is greeted with a browser’s delight, assuming one is interested in the Hudson region and New York City, the subjects of most of the prints and postcards at Hudson Rogue. Saunders calls himself a “dealer in antique papers,” and those papers come in the form of prints, maps, books, historic autographs, posters, photographs and other ephemera. Most of his prints are historical, dating back to the Revolutionary War or World War I. Saunders acquires these from other dealers, estate sales and privately — “it’s kind of a scrounge,” he said. 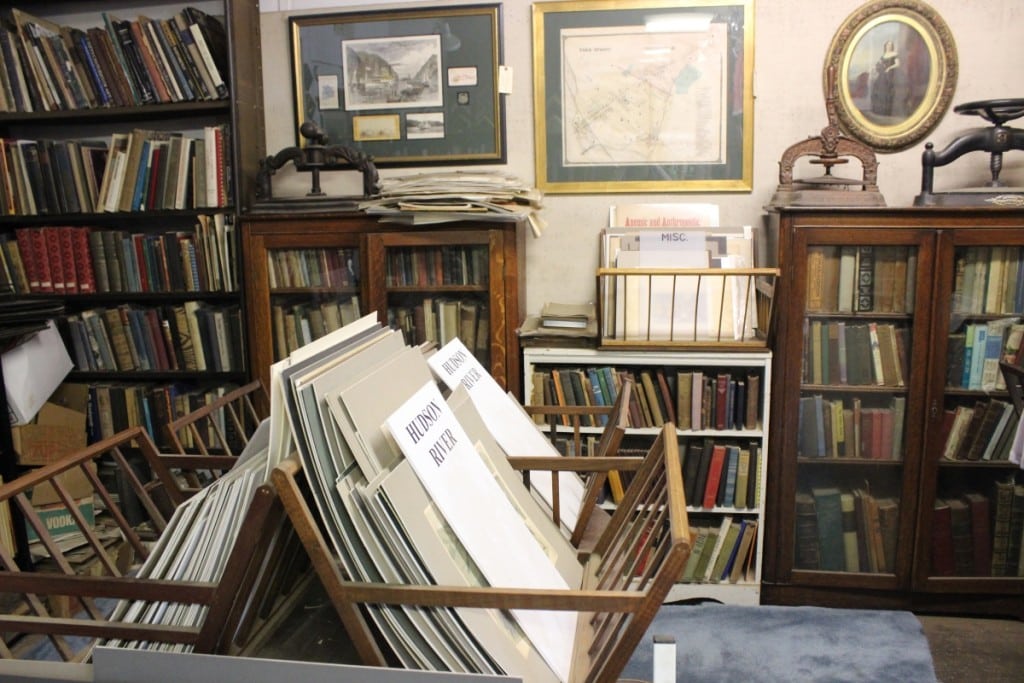 Beckoning browsers to flick through them, prints and books vie for space at Hudson Rogue.

He looks for the unusual, because with the advent of the Internet era, all has changed and “it’s harder to sell the ‘ordinary’ stuff. The old books business is practically dead, aside from the very high end, and to a lesser extent that’s true with mid-range prints, too. If I didn’t do custom framing I’d have been out of the business long ago. Book dealers used to come in here and clean me out, but I haven’t seen one now in about 10 years.”

Saunders said his greatest expertise is probably in autographs. For years he issued extensive catalogues, with signed documents from everyone from Napoleon to George Washington (though no movie stars or sports figures); he handles much less of that now.

Hudson Rogue’s quiet Nelsonville location is off the tourist path, though occasionally some stop in. That’s OK with Saunders, because “I have a higher percentage of serious customers. They come looking for what I have; they’re not just walking by. People ask around and find me.” 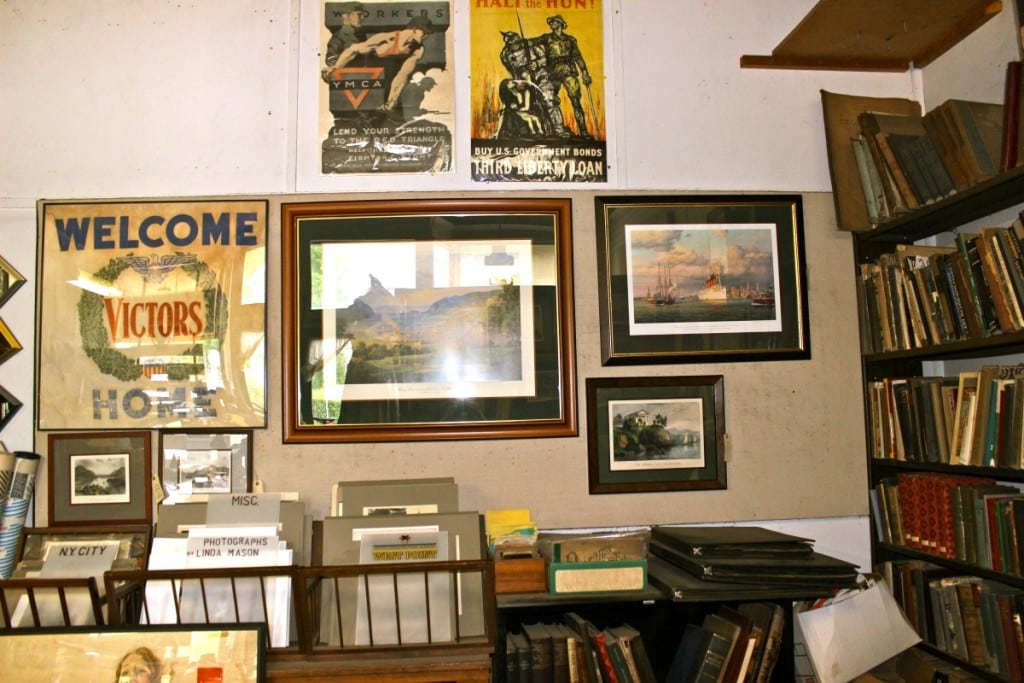 Along with the older material, Saunders also sells his own photographic work, mostly scenic, panoramic landscapes — something he began after customers asked for just that. Also displayed in the store is a line of Blue Chair jams, made by his daughter Rachel’s company, along with two cookbooks she has written. Not to be left out of the picture is Saunders’ wife, Anne, whose vintage-pattern, hand-sewn aprons beckon from pegs near the counter.

Hudson Rogue is located at 255 Main St. in Nelsonville. Opening hours are Friday, Saturday and Sunday, noon to 5 p.m., or by appointment. They can be reached at 845-265-2211 or [email protected]