Trying to both control and accommodate large gatherings in the countryside and limit disruptions, the Philipstown Town Board has drafted a proposed law to require temporary permits for such events as high-attendance fundraisers, weddings and commercial film “shoots” and called for a public hearing on the measure.

It acted at a workshop session last Wednesday night (June 24), scheduling the hearing for 7:15 p.m., Thursday, July 9, at Town Hall, prior to the board’s formal monthly meeting that evening.

While instituting new provisions for events with 100 or more participants, the draft law would replace the makeshift practice of sometimes issuing parade permits — even when no parade is involved — for large gatherings. For instance, on May 7, the board approved a parade permit for a three-day music-art-yoga program for 300 to 400 people at Lake Surprise Camp.

Various nonprofits in Philipstown have held fundraising lawn parties, dances or similar gatherings at private estates; some property owners also have used their land for receptions and related celebrations.

Supervisor Richard Shea June 24 described the measure as an attempt to help, not hinder. “This certainly isn’t intended to put more restrictions” on institutions or individuals “for events,” but to give them a way legally to stage galas and conduct similar activities, he said. “I don’t think it’s going to hold anybody back or cause any undue hardship.”

As an institution that could benefit he mentioned Glynwood, a farm-based organization, on an old estate, advocating sustainable local agriculture. “They need a mechanism even for having their annual gala. This would provide that,” Shea said. 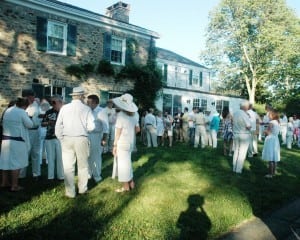 The 2011 Putnam History Museum lawn party occurred at Glynwood, an organization cited by Philipstown Supervisor Richard Shea as a potential beneficiary of a proposed law on permits for gatherings. File Photo by L.S. Armstrong

In late May, when announcing the board’s desire to pursue the law, Shea said that institutions with land or rural facilities currently “have events and they’re not actually complying with the code.” He mentioned barn dances: “Those actually are not legal right now. You can’t have them unless you have a fire suppression system [and] all those things” mandated by the town code.

To regulate events, the law would require a permit for any “occasion on private lands which do not have an approved site plan or equivalent approval for such use” — for example, those not set up as an established venue for such activities — “and for which a fee is charged,” either to attendees or as rent for the place.

Likewise, the law would require a permit for any event drawing 250 or more attendees, even those charging no fee. The measure would also apply to “filming, videotaping and recording in a commercial manner on public and private lands” in Philipstown.

Temporary permits can assist nonprofits and property owners, “encourage commerce here” and simultaneously “ensure we’re supporting the safety of the event” being held, Shea said last month. Among other provisions, the proposed law would require “having the local fire departments there on standby,” he said.

The draft law states that if the event is “held in a structure other than a tent, without sprinklers,” the organizers must obtain a letter from the relevant fire company “stating that a manned pumper-tanker truck will be on-site during the event.”

At the June 24 workshop, Councilor Robert Flaherty asked about compensation to the firefighters for their duty, and Shea agreed the board can consider an appropriate quid pro quo. On the part of event organizers “there will be an awareness there needs to be a contribution” to the fire company, he said.

Other provisions in the law would require event organizers to describe how they will handle parking and traffic flow, trash, sanitary arrangements, music amplification and more. Filmmakers and video producers would have to provide details of insurance coverage.

Under the law, the Town Board, which would grant the temporary permits, could both waive some requirements and add other “reasonable conditions.”

Councilor Nancy Montgomery favored increasing the number of attendees allowed before the law’s provisions are triggered, a suggestion also made by the town’s Planning Board in its analysis of the draft.

Shea concurred that some provisions can be tweaked as needed but stressed the importance of moving forward on the basics to get the law enacted in time to serve the summer outdoor-event season.

An introductory section of the law provides justification for the proposed rules, stating that “the Town Board finds that use of private lands … for events and mass gatherings, such as wedding receptions, large parties or other such festivities, is an ongoing occurrence … and that such activity, if unregulated, can cause hardship, inconvenience and discomfort to neighboring property owners and may endanger the safety of attendees.”

Moreover, it declares that interest in commercial “filming, videotaping and recording on private and public property has been increasing … which has resulted in possible hardship, inconvenience, danger and discomfort to large numbers of residents … due to disruption of traffic on public streets and in private neighborhoods.”

One thought on “Town Board Wants Permits for Large Gatherings on Private Land, Filmmaking”