Every morning, Stephanie Impellittiere, aka “Mrs. I,” has stood outside, winter’s chill notwithstanding, and greeted the children at Garrison School (GUFS) as they jumped off the bus excitedly or emerged bleary-eyed from their parent’s cars. These morning greetings were mentioned repeatedly at the special send-off for the retiring principal and her co-retiree, Judy Dunstan, the school’s nurse of 20 years’ standing.

In an intricately planned surprise by the “Sunshine Committee,” headed by teacher Jeanne Khuns, on the last day of school, June 25, it was Mrs. I and Mrs. Dunstan who were greeted, as they arrived on the big yellow bus, by the entire school: students in every grade, teachers and all the rest of the staff, and GUFS Board members. 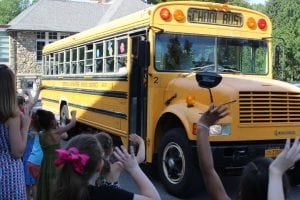 The school bus carrying the two honorees makes its first circuit, to the cheers of the kids.

The morning began with Mrs. I being told that she would be picked up at home — but that’s all she was told. A yellow school bus, specially decked out in an “Aloha” theme, traveled out to collect her, Dunstan its sole passenger, having been “ordered” to get on it when she arrived for the day. Meanwhile, in a carefully orchestrated plan, while the bus was gone, the entire school lined up in order, the oldest grades taking their spots at the farthest reaches of the long driveway. Kids were equipped with homespun noisemakers as well as their own vocal cords to herald the return of the bus. And music was indeed made as the bus entered the school grounds and circled twice, both women greeting the gathered crowds with ear-to-ear grins mixed with a dollop of bittersweet. 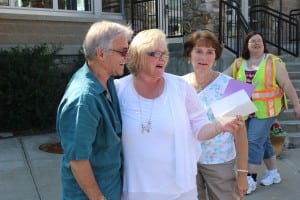 They then exited the bus, and each made her way down the receiving line, handshakes and hugs being proffered by all. Every teacher and staff member had a rose to give to Mrs. I — 35 in all, signifying the 35 years she spent at the school, first as teacher, then administrator; a bouquet awaited Dunstan at the conclusion.

Amid their excitement, the children had many pieces of advice to give to the two about-to-be retirees on how they should enjoy this next chapter in their lives. Here is some of that wisdom:

Khuns, the “sunshine committee” member who did most of the planning, said the aim was to “do something big for them and flip what they usually did and do it for them instead. Stephanie is always someone who greets the kids. Between the two of them, we’re losing a lot: 35 years in one building for one and 20 years for the other; both are incredible people. We thought of sending a limo out to get Stephanie but decided against it, because she’s not a limo kind of gal. The whole school was in on it and they’re all out here today: every student, every staff member, board members, secretaries, clerks, they’re all here for Stephanie and Judy today.”

2 thoughts on “Mrs. I and Nurse Judy Are Farewelled, Garrison School Style”