It’s not a common occurrence for a Japanese teenager to be handed a banjo by his father, accompanied by an “I’d like you to learn how to play it.” Yet at 13, that’s exactly what set Kyoto-born and raised guitarist and songwriter Hiroya Tsukamoto on the path he continues today.

Tsukamoto, who will be playing a concert at the Howland Center on July 11, recalls the reason behind the gift: “American folk music was popular in the ’60s when my father was young.” That five-string banjo led to a guitar the next year, and that was that: Tsukamoto spent the rest of his teens teaching himself how to play, inspired by a mix of musical influences — from American hard rock to roots music, blues, jazz and folk from Japan and the rest of the world. “I tried to discover everything myself, through records,” he said, adding that he “had no teacher until I was 21, I just played with friends.”

The international patchwork of musical influences continues to this day. Tsukamoto’s website describes it as “eclectic, immersive and mesmerizing original music plus Japanese folk songs with stories behind music.” Tsukamoto said he composes most often during his travels, inspired by the different landscapes he encounters. He uses the description “guitar poetry,” along with “an impressionistic journey filled with earthy, organic soundscapes that impart a mood of peace and tranquility” to encapsulate his work. “I compose when I’m away, so seeing my concerts is, in a way, like watching a film,” he said. 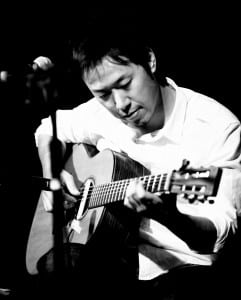 While in high school Tsukamoto wanted to become a musician, but his family guided him instead to college. During his years at Osaka University, he earned a degree in Spanish, prompted by a summer homestay in Mexico — his first time traveling out of Japan — where the family he was staying with had similarly aged children. He was also introduced to the South American Nueva canción movement fusing folk traditions and political protest. Tsukamoto finally took some private guitar lessons that elevated his technique and artistry to a level where he was accepted by Boston’s prestigious Berklee College of Music on scholarship.

Moving to Boston carried with it the requisite culture shock. “It was a big move,” Tsukamoto said. “The people and the environment were different. In particular the students’ attitude: They had a lot of opinions and responded to the teachers very much. People are very individualistic here, and at the beginning this was challenging for me.” He adapted well, however, and now makes his home in New York City, with trips back home once a year to visit his family, whom he misses a lot, along with the mountains, rivers and streams in the small town near Kyoto he hails from. “As a musician, I have learned so much from the great American musicians. To live here is more cultural for me and I’m used to it now,” he explained.

Tsukamoto’s debut album, The Other Side of the World, was released in 2004, and has been followed by three others. His many concert appearances include several at the Blue Note in New York City, and he has performed with Esperanza Spalding, Kendrick Scott (the Crusaders), Pete Kennedy (the Kennedys) and Dave Maxwell (the Muddy Waters Band). Most of his time is spent touring, extensively, both in Asia and crisscrossing the U.S., where an agent handles his bookings “west of the Mississippi River” and he does the rest. That’s not easy, as his music and the best places for it to be heard can be hard to define. 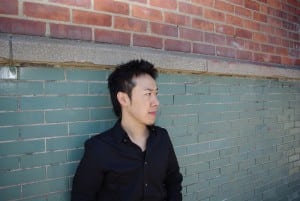 “It depends on the venue; some are more oriented to guitar music, while some are more folk. Sometimes the places are more like a club, with younger audiences. My music is a combination of guitar and Japanese music. The Japanese music I play is based on music which was composed after American and other Western influences came in, and so these songs have two cultures. In my performances I explain the histories and stories behind them so people can connect. The melodies are Japanese, but the chords are Western because piano came into Japan over 200 years ago. … My subjects can be very Japanese, they are often about nature, and I think this comes through in them,” explained Tsukamoto, who plays on a handmade custom guitar made by Hongoh in Japan.

Tsukamoto is happy to be returning to the Howland Center, praising the building’s beauty and acoustics. He will also be performing at the Rockwood Music Hall in New York City on July 31, along with Satoshi Takeishi on percussion. For sampling Tsukamoto’s music, many performance clips are available on YouTube, as well as on his website, hiroyatsukamoto.com.

The Howland Cultural Center is located at 477 Main St. in Beacon. Tickets are $10 and will be available at the door. A reception to meet Tsukamoto will follow the performance. For more info, visit howlandculturalcenter.org or phone 845-831-4988.

Images courtesy of the artist