For six years the Beacon Institute for Rivers and Estuaries has offered an annual series of free lectures down at Denning’s Point in the form of leisurely strolls with a local expert in such matters as forestry, history and nature photography. But the circumstances surrounding the creation of the series were anything but relaxing. 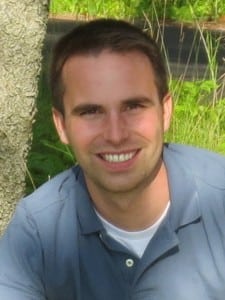 Forester Ethan Pierce will lead a walk at Denning’s Point on July 11.

In 2004 Jim Heron, a retired Episcopalian minister who had been working for the institute as a volunteer historian, uncovered an article from a 1930 edition of the now defunct Beacon News that referred to an ancient Indian burial ground discovered at Denning’s Point. It was a sobering discovery for the institute, who had recently announced plans to build a multimillion-dollar center at Denning’s Point. If the land had, in fact, been a sacred burial site, their plans for the future would come to a screeching halt.

“So they asked Jim to do a little more research,” explained Michael Heintzman, the Beacon Institute’s public outreach coordinator. “He ends up doing it for two years and then writes a book about it.”

Heron’s book, Denning’s Point: A Hudson River History, begins with the quest to uncover evidence of Indian cemeteries at Denning’s Point. (Spoiler alert: no definitive evidence was found, which is why the Beacon Institute’s Center for Environmental Innovation and Education at Denning’s Point exists.) But it also reveals much more about the point’s historic past: the wealthy families who clear-cut the land for housing and farming, the almost daily trips that George Washington made to Denning’s Point from his headquarters in Newburgh, and how Alexander Hamilton began his early drafts of The Federalist Papers while staying at Denning’s Point in 1781.

After the book was published, Heron began leading informal tours of the point with those who had read the book and wanted to learn more. This led to a more formalized series of walking tours with other experts on different topics.

This year’s series kicks off on Saturday, July 11, at 10 a.m., with a forestry talk led by professional forester Ethan Pierce. For Pierce, the most interesting thing about Denning’s Point is how its history determined what is — and isn’t — growing there.

“When people dug up the land, they basically cleared the botanical slate,” he explained. “The majority of the native flora has been wiped out, and the majority of what has come back since has been nonnative plants, a lot of invasive vines and shrubs, Asiatic bittersweet, Japanese barberry, Japanese stiltgrass. That’s one of their strong suits. They can colonize disturbed land where the topsoil has been removed and only the bare mineral soil is present. So they found it to be a ripe place to grow.”

Those dominant Asiatic and Eurasian invasive plants contribute to the particular feel that Denning’s Point has, and why walking along its shores feels very different than walking anywhere else in the Hudson Valley. “It’s sort of a jungle of plants that aren’t from around here,” said Pierce. “So it’s interesting to see how they’re interacting, and try and figure out what the future ecosystem there is going to look like.”

The most notable missing piece of flora from Denning’s Point is the Washington Oak: A legendary oak tree that George Washington used to tie his horse to when he would visit. Photographs and paintings prove that the oak once existed, but little trace of it remains. “But there are two other very large oak trees that remain,” said Pierce. “So you wonder if those oaks are the brothers and sisters of the Washington Oak. Early descriptions of the point talk about the numerous oak trees that lined the shore, so I think those two might be the last ones. It’s interesting that you can still find some remnants to connect you back to the 1700s.”

The next scheduled lectures in the series are geology on July 25, mushrooms on Aug. 8, and archaeology and history on Aug. 22. Although the lectures are free, preregistration is required at bire.org/events. Having experienced all of the lectures himself, Heintzman is confident that no matter which walks they go on, the public will enjoy taking the time to experience Denning’s Point in a way that they probably have not before.

“It’s like a little laboratory out there that we have, and it’s an easy walk,” he said. “It’s simple for people to get down there, do the walk and continue on their day.”