Groundbreaking ceremonies aren’t known for keeping participants on the edge of their seats, but the one held on Wednesday morning (July 8) to kick off the redevelopment of the former Julia L. Butterfield Hospital site in Cold Spring had more drama than most. Part of the excitement came during developer Paul Guillaro’s opening comments when he announced that the project will include a home for a new village post office. Added to the fact that the multiuse development will house a long-awaited senior citizen center, there was more than ample cause for celebration. 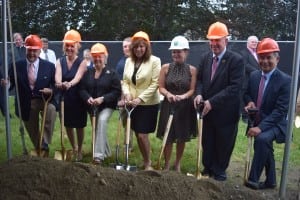 Local elected officials in attendance also had reason to smile as Guillaro listed the project’s economic benefits, which he said will include 85 jobs during construction with 20 to 75 full-time jobs upon project completion; $431,000 in net annual revenue to be shared by the Village of Cold Spring, Town of Philipstown and Haldane Central School District; projected retail spending to exceed $825,000 by residents living in the new condos and houses; and $175,000 in projected annual sales tax revenue. 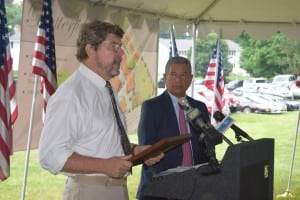 Guillaro said the site will also include a one-acre open space to be named Pataki Park in honor of former New York Gov. and current 2016 presidential candidate George Pataki, who was not able to attend Wednesday’s event. John Cronin, environmentalist and educator, who lives directly across from Butterfield, praised Pataki, referring to him as “the best environmental governor America has ever had … and the most courageous political leader in the U.S.” Cronin accepted a plaque on behalf of the governor.

Dignitaries in attendance included state Sen. Sue Serino, state Assemblywoman Sandy Galef, Putnam County Executive MaryEllen Odell and Putnam County Legislator Barbara Scuccimarra, each of whom spoke briefly. In addition to congratulating Guillaro, several speakers also had words of praise for Roger and Elizabeth Ailes, who also attended and gave brief comments. Ailes, chairman of Fox News, has pledged $500,000 toward outfitting the senior citizen center to be established by Putnam County and which Guillaro announced will bear Ailes’ name. His wife is publisher of the Putnam County News and Recorder.

The new senior center at Butterfield will be named after Roger Ailes, center, who pledged $500,000 to the project. Also pictured are his wife, Elizabeth, and developer Paul Guillaro.

Tina Gilbert, assistant project manager on the Butterfield project, told The Paper that the former hospital will likely be demolished in August. The work site has been fenced and the building has been stripped of much of its contents. “The priority now is keeping the community safe,” she said. “We’re set up for the remediation of hazardous materials” inside the building. Like many older structures, the abandoned hospital contains asbestos.

Gilbert said the new buildings will be completed in phases and that the entire project will take up to three years. One of two commercial buildings and the initial condominiums for residents over the age of 55 will be among the first to be constructed, “and then hopefully one of the three single-family residences” slated to be built along Paulding Avenue, she said. The construction schedule could change depending on demand for commercial, retail and office space on-site. Gilbert also said that advance sales of both the condominiums and single-family residences will be offered. Condominiums will cost in the $299,000 to $375,000 range while the homes on Paulding will be priced in the $600,000s.

While Wednesdays’ event marked the beginning of a new era for the 5.7-acre site, the ceremonies also paid homage to local history. Guillaro presented Putnam History Museum Executive Director Mindy Krazmien with the contents of the cornerstone from the 1941 addition to Butterfield Hospital. The cornerstone itself will become part of the new senior citizen center. The developer also presented Elizabeth Ailes with a copy of the Oct. 23, 1941, Putnam County News that was discovered in the old hospital. 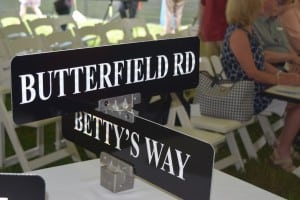 Guilllaro also highlighted the naming of four internal roads for the site. Julia Lane and Butterfield Road will honor Julia L. Butterfield, whose bequest aided the construction of the hospital that bore her name from 1925 through 1993. Clark Drive will pay tribute to Dr. Coryell Clark, a physician who practiced in Cold Spring and at Butterfield Hospital for more than 50 years. Betty’s Way will be named in memory of Betty Budney, a beloved citizen, community volunteer and longtime member of the Philipstown Town Board who died in March of this year.

Toward the end of his remarks, Gullaro hinted at the rough road that his project experienced as it wound its way through various local boards that dissected, reviewed and criticized it, while at times a vocal minority of residents opposed it. The developer said that it brought to mind his last project in the village — the development of riverfront condominiums on the site of a long ruined, eventually demolished old lumberyard. “So many opposed it … but once it was built they embraced it,” he said. “I believe the same thing will happen at Butterfield.”