Richard Szypula was pulling weeds in the backyard of his house when he found an interesting rose. He liked it but wasn’t sure if it was something to cultivate or eradicate. His garden club had a meeting with a gardener from the New York Botanical Garden and he asked about it. The gardener invited him to visit the NYBG rose garden, and there it was flanking the steps on either side of the hill leading into the gardens below. Although the NYBG plantings are rotated and it isn’t there now, Szypula felt pretty good that his rose bush was included in their impressive collection.

The Rosa Dorothy Perkins, as it’s called, has now gone with him to two different addresses, and he still tends it here in his yard, where it was planted by family years ago. His home near Cold Spring, belonged to his aunt and uncle previously, and he believes they planted Rosa Dorothy Perkins originally in the 1920s. When he discovered it in the overgrown yard after they died, he said, “it was growing wild and had tendrils 20 feet long. Rosa Dorothy Perkins was a very popular rambling rose in the early part of the 20th century.” 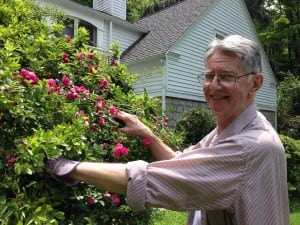 Richard Szypula’s roses were originally planted by his family nearly 100 years ago.

Rambling roses are distinctive from climbing roses because they only flower once in a season, and climbing roses can flower more than once. They have similar tendencies when it comes to trellises and prodigious growth, though. A Dorothy Perkins bush near Szypula’s front door that he planted about 10 years ago is 8 feet high and sprawling. It was in full bloom during my recent visit and covered in bright pink flowers that attracted bees.

The blooms are thick and full — Szypula described them as “lush” as he pulled on a heavy glove and went to work clipping stems for me to take home. A perk of the job, lucky me. The thorns are not insignificant, though. Beware handling it without a heavy glove.

Szypula said: “I tried to root it and succeeded, and here’s one successful rooting that has now dominated the azalea bush underneath it. I noticed it had long tendrils and it was laying on the ground and in different places there were roots. It tends to root by itself.” He planted it at a house he owned in Bronxville, too. As far as pests or diseases go, he said that he’s been warned about mold, but he hasn’t had a hard time with it. The deer leave it alone, too. A different variety of rose planted next to another Dorothy Perkins was eaten.

It isn’t always pink, either. He said: “The Dorothy Perkins rose will sometimes produce a white variety. That grew very successfully in Bronxville and I transplanted it. There are a few shoots left but I need to cut things back around it and see if it will do better.” Many of the plants, trees and shrubs he noted were transplants or successful propagations. 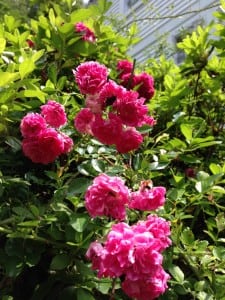 The Dorothy Perkins rose variety can have white blooms, too.

Szypula’s landscape is full of history and connections. The Dorothy Perkins rose is only one example, still here after being planted by his family members nearly 100 years ago. As he shows me around, he pointed out the perennial sweet peas and said: “They were planted here by my aunt about 75 years ago. Her niece came by one day and asked if she could visit. She said, ‘Oh, the sweet peas are still here. When I was a little girl, Aunt Catherine took me to plant the perennial, not annual, sweet peas so that they would bloom forever and ever.’ She came back 50 years later and they’re still here.”

A silver leaf maple hovering over a pond fed by the stream that flows down East Mountain sparked another memory. He said: “It was given to me by the father of a girlfriend 60 years ago; I remember her every time I walk by here. When the wind blows, it makes a beautiful, shimmery thing.” This tree has been shared, too. He propagated cuttings that he gave away to people.

He planted a lovely dogwood tree to frame the view of the pond he built in 1970 with help from his father. Szypula points out areas in the stream where he swam as a child and then made swimming holes for his sons to play in later. In one area along the stream, he pointed out where there used to be a sawmill and another area where he believes the original road was built over the stream.

Szypula’s relationship with his landscape is one of caretaker and history maker, as well as preserving a natural legacy of family history. Plants are a connection with the past and a gift for future generations.