Cold Spring could have a new post office by March 2016 if construction at Butterfield goes as planned. Developer Paul Guillaro outlined the construction schedule for the former hospital at the Tuesday (July 7) meeting of the Cold Spring Village Board.

Guillaro said asbestos removal has begun and that the hospital building will be razed by September. Construction on Building No. 2, which will contain the senior citizen center and the post office, should begin in August or September. “The post office would like to be in by March,” he said. This fall, work will get under way work on site infrastructure, Building No. 3 and one of the three Paulding Avenue residences. The park will be the last portion of the site to be completed.

“We’ll probably use it as a staging area,” Guillaro said. John Furst, the new village attorney, is reviewing documents related to easements and bonding for the project. “Once those reviews are done, we’re all set,” the developer said. 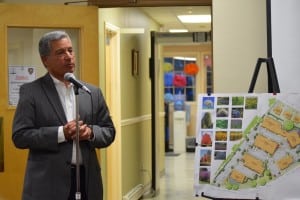 Guillaro estimated that the entire complex will take about two and a half years to complete. There is already “a pretty good list” of potential customers for the site’s condominiums, and he said sales will begin more formally in October. He is also working with Hudson Valley Hospital regarding a possible refurbishing of the Lahey Pavilion.

Later in the meeting, Mayor Dave Merandy said he is looking into hiring a special building inspector who will deal only with construction at Butterfield, taking some of the burden off Village Building Inspector Bill Bujarski. Merandy said Guillaro is agreeable to paying the cost of the inspector. 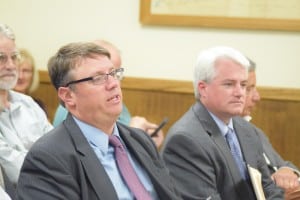 Bujarski, who commented that his department is running about two weeks behind due to a busy summer construction season, said he would prefer receiving weekly engineering reports and that if a special building inspector is hired, Bujarski would have to sign off on the other inspector’s work. “Ultimately, it has to go through this office,” he said.

Development of the multimillion-dollar 9-mile trail connecting Cold Spring and Beacon is moving forward, to the delight of many, but it is also raising concerns among local residents and community leaders.

Amy Kacala, a senior planner with Scenic Hudson and project manager for the Hudson Highlands Fjord Trail, reported at Tuesday’s meeting that the Cold Spring portion of the trail, a sidewalk that will follow Fair Street north past Mayor’s Park to Little Stony Point, will be complete by September. In addition, the Washburn parking lot directly across from Little Stony Point is being expanded to accommodate 52 vehicles. Bids for engineering and design of the trail from Little Stony Point to Breakneck were due this week, and Kacala said construction should begin next year. 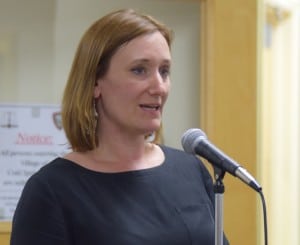 Ironically, the biggest challenge for the project may be the area’s popularity. Kacala said that while last year there were only two days on which more than 1,000 hikers ascended Breakneck, there have already been six such days in 2015. Use has been increasing at a rate of 25 percent a year, she said.

Village trustees and the audience weighed in, raising problematic issues that they feel are worsening — even before new trail construction has begun. “Garbage is a concern,” Trustee Cathryn Fadde commented. Resident Donald MacDonald was more emphatic. “The trail has been beat to hell; the erosion is unbelievable; the graffiti is ridiculous,” he said.

Trustee Michael Bowman added that hiker injuries and rescues have also increased, increasing the workload and equipment costs for first responders. Trustee Fran Murphy said she is concerned that hikers will take up parking spaces at Mayor’s Park, at the expense of local residents who want to use facilities there.

Merandy summed up many the issues raised, suggesting that limiting the number of hikers ought to be considered. “The trail is worn out,” he said.

Kacala acknowledged the questions raised and said they will be considered as part of the project’s environmental impact review. The next public meeting for the Fjord Trail has not yet been scheduled.

Scenic Hudson Parks Director Rita Shaheen also provided an update on the West Point Foundry Preserve, reporting that the cupola from the foundry’s 1865 office building has been shipped to Vermont to be restored and that it will be put back atop the building as early as this fall. There are no other plans for the building at this time, Shaheen said.

Responding to a question by Deputy Mayor Marie Early, Shaheen commented on the future of the 13-acre Campbell property acquired by Scenic Hudson in 2007 and located adjacent to the preserve. She said consideration is being given to subdividing the property, with part of it, including the historic home, to be used as a residential lot and the remainder being made accessible to the public, incorporating a trail and an overlook.

Residents who will be away from Cold Spring on vacation this summer might want to take note of the Cold Spring Police Department’s “Dark House Check” program. A written report from Officer-in-Charge George Kane indicated that residents can fill out a form at the CSPD office, alerting officers to the dates they will be away. “Once we have this information, officers will make certain to pay attention to your property while on patrol,” Kane’s report stated.

One thought on “Construction Schedule Set for Butterfield”