There’s trouble in River City and it all started with five teens from Philipstown asking to direct the Youth Players production for the summer of 2015. Harper Levy, Corydon Zousias, Allie Larocco, Jeremy Roffman and Josie Altucher were the assistants for last summer’s production of Fiddler on the Roof Jr. and were itching to try to direct the Philipstown Youth themselves.

Lisa Sabin, youth coordinator, set up workshops throughout the year for the teens to meet with mentors who could help guide them in the process of directing and producing a youth musical. Teens Jocy Lane and Cassie Traina joined as the costumers, Paul Heckert as pianist and Donald Kimmel as set designer. 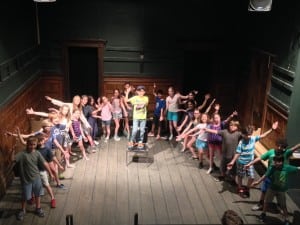 The Philipstown Youth Players in ”The Music Man Jr.”

River City is brimming with talented actors, dancers and singers ranging in age from 9 to 12 telling the story of Harold Hill coming to town and bamboozling the townspeople into creating a boys band to keep the kids out of trouble, winning over Marian the Librarian and reminding the audience of the joy involved in creating magic. Performances are Thursday, July 23, through Sunday, July 26. Tickets can be purchased at philipstowndepottheatre.org or brownpapertickets.com.