The older I get, the more it seems that this life is an opportunity for the constant appreciation of change — particularly when confronted with the dazzling and sensual play of time and the seasons over these Hudson Highlands.

A celebration of the ephemeral and fleeting passage of time is certainly not a tendency accorded cultural relevance in the modern world — certainly not in that city downriver trading as it does in the immediate gratifications and the bright, shiny, superficial objects of technology and fashion.

Maybe it’s just this current season, this July that has seemed like a September on more-than-one beautiful morning: cool, moist, abundant. The gardens are lush, almost British in their verdancy. Friends of mine are by now weary of my tentative Buddhist exhortations for a mindful and grateful appreciation of the present and a fundamental acceptance of life’s fragility, impermanence and uncertainty. But really, there is ample cause to celebrate it all.

Idealistic thinking, maybe, and surely a bit strange and hopeful, considering that Western culture tends to hold in its highest regard those things that are (seemingly) permanent and unchanging. We treasure materials like gold or diamonds, ostensibly for their “beauty,” but more so for their permanence and indestructibility, and consequently assign them value, and ultimately they become merely currency — a medium of exchange or commerce. This is probably a social necessity, but in the process we seem to lose our appreciation of the transient beauty of the natural world and its universal cadences.

As an example in contrast, the Japanese welcome spring with the centuries-old celebration of Hanami, the annual cherry blossom festival. But deeply embedded within their celebration is an appreciation for the intensity and ephemerality of life. The transience of the blossoms, their extreme beauty and quick passing are also culturally and mythically associated with impermanence and mortality.

To be sure, this celebration has Western correspondences — notably in Washington, D.C., and Philadelphia — but here in the Hudson Valley, those fragile blossoms inevitably blend into the beauty of all of our flowering spring trees. Here, we prefer to celebrate the fruit of all those blossoms and the short, sweet season of cherries. But while we are fortunate enough to foster both sweet and sour varieties, the sour variety — Prunus cerasus — is the cherry most commonly identified with the HRV.

While this designation — “sour” — would seem an immediate turnoff, the fact is that the tart varieties have both greater nutritional and culinary currency than the easy, eat-out-of-hand sweets. Sour cherries can be dried, juiced and distilled for liqueurs and are nominally preferred by chefs for baking and pies, offering as they do a greater “complexity,” a more substantial texture, and an ability for the chef to better control the balance of sweet-to-tart.

And, as with their ephemeral blossoms, the fruit of the cherry tree is equally fleeting and as short-lived in season: It is said when you hear fireworks, you’d better come running; blink and the cherries will be gone. We find ourselves now at the end of that season.

Thankfully, for some reason, the birds this year didn’t seem as interested in the better-than-average crop, and even once the pies have been baked, the surplus harvest requires other solutions.

Again, we are “gifted” with an opportunity to celebrate the fragility and passing of time — and a chance to preserve a bit of its essence. 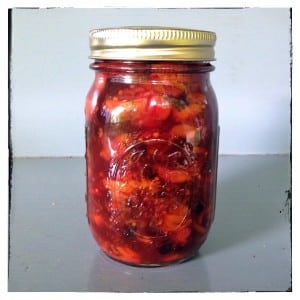 In their respective and essential fruit cookbooks, both Jane Grigson and Alice Waters suggest pickled sour cherries as one solution. In both their versions the preparation couldn’t be simpler — it is even suggested that the pickles benefit from the fruit not being pitted. Cerises à l’aigre-doux are prepared by placing washed whole cherries in a sterile jar and covering them with a spiced, sweetened and boiled vinegar solution.

The seasoning options are variable and endless (cloves, cinnamon, anise), but I settled on a very simple combination of black pepper and bay leaves. Once cured (for at least a month), an open jar will keep (refrigerated for up to a year) for extended enjoyment along with a spread of cornichon and charcuterie — particularly pork or duck.

As a more energy-intensive alternative — and for immediate gratification, I suggest sour cherry chutney. This relish, in keeping with the previous “Small, Good Things” offerings, covers a few more bases on the taste palette. Sweeter with the addition of currants (golden raisins might actually be better), and savory with the addition of onions and mustard seeds, it is also marginally more useful in the pantry.

I successfully reverse-engineered a cheese platter based on this chutney: Try it with a sharp, aged sheep’s milk cheese from Spain or a sweet/nutty torta de cabra made from goat’s milk. I’m told this will work extremely well with a nice Bordeaux. 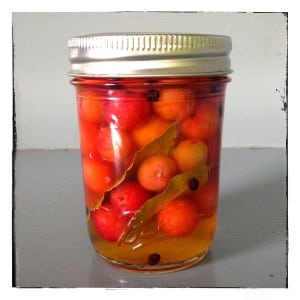 But just as with the picked cherries, this modified mostarda begs to be paired with pork or duck, and my household is at present looking forward to tomorrow night’s crisp pork belly with sour cherry chutney, polenta and a mess of sautéed greens.

Bring vinegar, water and sugar to a boil, until sugar is dissolved. Remove from heat and add the peppercorns and bay leaves.

Wash and dry the cherries, trim any stems to ½ inch and pack loosely into sterilized canning-type jars. Strain the hot vinegar syrup over the fruit to cover. Cover the jars and seal as per canning instructions. Refrigerate (at least one week) before serving. Once opened, they’ll keep in the refrigerator for about one year.

A few gratings of nutmeg

Manufacture a small spice pouch of the cardamom, cloves and star anise, bound in a jelly bag or double-layered square of cheesecloth, tied tight with kitchen twine.

Combine all ingredients in a saucepan and bring to a low boil over medium heat. Turn heat down, cover and simmer gently for about 30 minutes.

Remove cover and continue to simmer until mixture is thick. (This may only take a minute or two.) Off heat, remove spice pouch and cinnamon stick. Chutney will keep refrigerated for up to two weeks, or can/jar as you would preserves.