The Haldane Board of Education is poised to vote “yes” or “no” on changes to the school district’s administrative structure on July 28. The proposed modifications have raised questions in the community, and the board held a special meeting on Tuesday, July 21, to address concerns.

The change being considered were prompted when Jennifer Wilson resigned in June to take a new position at BOCES. Wilson was director of special, remedial, and assessment services at Haldane and also served as chief information officer.

Superintendent of Education Dr. Diana Bowers said that Wilson’s departure and the need to implement the district’s Strategic Plan were the primary impetus for brainstorming sessions among senior administrators aimed at determining the best way to move forward. She stressed that the Strategic Plan includes “next generation goals — 21st century goals” intended to make high school graduates college ready, with technology a major factor in that preparedness. 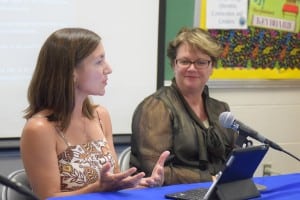 “All 10 goals relate to technology and technological literacy,” she said. “Information technology has become as important a part of the conversation as any other form of literacy.” Bowers added that ensuring the goals are met while educating every student at Haldane “requires modification” in how the district’s senior administrators are organized, including “less segregation of duties.” Learning, she said, “is a continuum and we have to educate that way.”

The biggest changes proposed include moving High School Principal Brian Alm into a new position, assistant superintendent, while Julia Sniffen, currently the elementary and middle school assistant principal, would take over as high school principal on an interim basis. Sniffen’s current position would be filled by a new hire on an interim basis.

Bowers stressed that the reorganization would not increase the number of senior administrators and would be budget neutral with no increase in salary costs.

More than 30 parents and staff, several of whom expressed doubts about the plans, attended the meeting. Questions centered on whether or not an assistant superintendent position is needed in such a small school district, the timing of the proposed reorganization, and the decision to include special education in Alms’ duties.

The reorganization was first proposed earlier this month. A number of speakers questioned the speed at which a decision is being reached, pointing out that during the summer many residents are away on vacation, and urged Bowers to take more time before holding the vote. Sandy McKelvey compared the proposed reorganization to the Common Core Curriculum, which was heavily criticized for being rolled out too quickly.

Maeve Eng-Wong and Kory Riesterer, members of the Learning Differences Committee, met with Bowers recently to discuss how special education would be handled as part of the reorganization. Both said they felt “blindsided” by Bowers’ proposed changes. Concerns over Alm being responsible for special education are in part due to what some believe would be too heavy a workload. As assistant superintendent, Alm would also serve as chief information officer, play a key role in implementing the Strategic Plan, coordinate the 21st Century Teaching and Learning Initiatives, and coordinate staff development and the New Tech Network as well as other administrative functions.

One parent expressed concern that Alm will suffer the same fate as Wilson, ending up with too many duties in very divergent areas. Another parent commented that in a recent special education meeting, Alm had difficulty addressing basic questions about the issues being discussed.

Michael Junjulas, a former president of the Haldane School Board, attended the meeting, but in his role as a reporter for the Putnam County News and Recorder. He spoke out against the changes twice, questioning the need for an assistant superintendent and whether the recommendations would remain budget neutral over time. He added that if he were still a member of the board he would vote against the reorganization as proposed. His article in the PCNR the following day was highly critical of Bowers’ proposed plans. 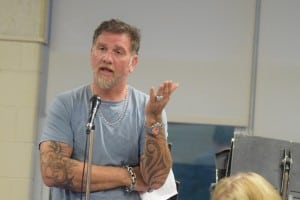 Mark Mormar on proposed reorganization at the July 21 Haldane School Board meeting: ’This will affect every element of the school’

Mark Mormar, a parent, said he is “all for change” but added that no justification had been given for creating the assistant superintendent position. He also questioned whether Sniffen and Alm are qualified for the more senior positions. “This will affect every element of the school, and it feels like you are cramming it down our throat,” he said. At one point the suggestion was made that Alm’s appointment be “interim” in order to evaluate his effectiveness in the new position, as is the case with Sniffen’s appointment.

Trustee Peggy Clements said that she was very enthusiastic about Alm taking on the new position but acknowledged the concerns she was hearing at the meeting. “I believe we have a really talented set of special education educators across the district,” she said. “I have a lot of faith in Brian — that he, in conjunction with the other administrators, can develop a system that meets the needs of our kids.”

Board Vice President Peter Henderson said that Bowers’ charge has been to “shake things up and set us on a good path for 21st century” by implementing the strategic plan. He admitted the situation “is not perfect” but added: “I believe it’s the best way to make things happen that might have taken longer. It’s not a done deal,” he said.

Bowers, who stuck to her guns throughout the meeting regarding the proposed changes, scheduled three informal “coffee chats” before week’s end, giving the public further opportunity to comment on her recommendations.

In an email to The Paper, School Board President Jennifer Daly summed up her thoughts on Bowers’ recommended actions. “The proposed reorganization is definitely a lot to digest. As a board, we … had all of the same questions the community has had,” she wrote. “I believe in Dr. Bowers’ recommendation to move into a more inclusive and innovative K–12 education model. The fact that we can keep the incredible team of Brian Alm, Julia Sniffen and Brent Harrington together through this evolution is an absolute bonus. Change is not easy or comfortable, but that is simply not a good enough reason to push this opportunity to the side.”

During budget deliberations last spring, Haldane’s School Board trustees included partial funding for a school resource officer (SRO), an armed sheriff’s deputy responsible for patrolling the campus. In her email to The Paper, Daly provided an update. “We are very close to having the [position] fully funded and are planning on having a SRO to start in the fall.”

In 2014, the cost of an SRO was $55,000, an expense that is split equally between the school district and the Putnam County Sheriff’s Department. Daly commented that SROs provide more than security and law enforcement. “They also serve as safety experts, educators, community liaisons and crime preventers.” She expects hiring to be done in August or September as part of a process that will involve representatives of the community and the school district. Haldane is the only high school in Putnam County that does not currently employ an SRO.

A new principal has been hired to replace Stephanie Impellittiere, who retired at the end of June after serving in that position at the Garrison Union Free School for 35 years.

John Griffiths, who most recently was principal at the Somers Intermediate School in Somers, will take over the position on Aug. 10. Laura Mitchell, GUFS superintendent, told The Paper that prior to his position in Somers, the 50-year-old Griffiths was the Pelham Union Free School District’s staff development coordinator, where he also served as technology learning facilitator and an elementary school teacher.

“His experience, love of children, appreciation for the arts and expertise in the innovative uses of technology to enhance the educational experience we offer our students will make him an invaluable asset to the Garrison School,” Mitchell said of Griffiths, who was one of approximately 150 applicants.