Chip Rowe is the kind of guy who will stop the family car when passing a cemetery and get out to start taking pictures of the headstones. He is particularly attracted to grave sites that appear no longer active or attended. He sees history in peril and wants to help preserve it.

He will upload the pictures he takes to a website (findagrave.com) that has a mobile app for smartphones that allows users access to headstone photographs based on their current geographic location. The database is not complete, but Rowe and others around the country are hard at work crowdsourcing the record. This is one example of how tracking family history in the digital age has become quite the informative adventure. 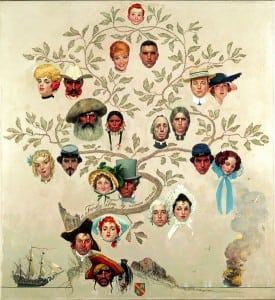 Families seeking a deep dive in their history, looking to trace as far back and as wide as records and evidence will allow, hire someone like Rowe to conduct an exhaustive and thorough search. But Rowe enjoys explaining to interested people that digital tools have made searches easier and that individuals can accomplish a significant amount on their own once they learn some basic rules of the road.

In late June Rowe conducted such a seminar at the Desmond-Fish Library. He is repeating his presentation at the Putnam History Museum on Saturday, Aug. 1, at 5 p.m. (free to PHM members; otherwise, $5). In his talk he offers a variety of approaches and multiple sources of information and services available today, far more than can be covered here.

Two basic sources for searching family history, according to Rowe, are one’s own living family members and government records, many of which are online. Birth and death records, court disputes, land transactions, military service and wills are among the rich sources of data that can supply evidence of family history. United States census records dating back to 1790 are among the best places to start a search, said Rowe.

Rowe warned his listeners that digital research has misinformation pitfalls, so it pays to establish authentic sources for information rather than putting too much faith in what someone else might have posted. “Find the original source document,” he cautioned. 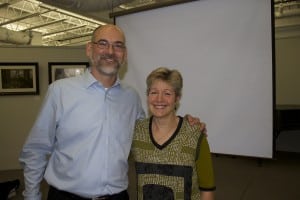 One aspect of genealogy people are often not prepared for is finding out the unpleasant facts, such as a new paternity discovery through DNA or a relative involved in wrongdoing. Rowe entertained his library audience with a few tales of people encountering information in some cases they wanted stricken from the record, a request that Rowe, a professional journalist, finds objectionable. “Everyone is a part of history, we all have history,” he said.

Cathy Liliburne is no stranger to researching old information. As co-proprietors of Antipodean Books in Garrison, she and her husband, David, specialize in finding rare volumes of history and literature, among other topics. But genealogy was something new for her. Having studied the subject under Rowe’s tutelage, she joined him at the library to share her personal experience searching into her past, which included displaying many photographs she found along the way.

“I had never known my grandparents and my parents were dead,” said Liliburne. She really only had a photograph of her grandfather, “the man with the hat on in the picture,” and knew that he apparently had been a Mason and lived in Brattleboro, Vermont.

Although welcoming, the local Masons couldn’t locate any records for her grandfather, but a story they inserted in the local paper drew the attention of a man who turned out to be Liliburne’s second cousin. That introduction led to a house built in 1787 by her fourth great-grandfather.

During the visit to the house, Liliburne encountered a man on the road who owned the house (but rarely visited it) and subsequently invited her and other family members to spend a weekend at the house. “It was like it was meant to be,” she said with a smile.

Later on she described how her use of census records and Google Maps led her to the Brooklyn front stoop she had seen in a picture of her grandmother.

Online Australian military records revealed that husband David (an Australian) had a great uncle who died at the famous World War l Battle of Gallipoli (in Turkey), something his uncle, a retired army general, did not know.