Parkins is a New York–based sound artist, composer and electro-multi-instrumentalist who also makes/arranges objects and images. Known especially for her explorations on the electric accordion and use of customized sound processing, she performs internationally as a solo artist and has collaborated with Wilco guitarist Nels Cline, Fred Frith, Ellery Eskelin, Jim Black, Thomas Lehn, Otomo Yoshihide, and ROVA Saxophone Quartet, among others. 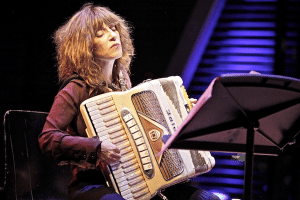 She also creates sound artworks and compositions for solo and ensemble instruments. Her audio works and performances have been presented at the Whitney Museum of American Art, the Kitchen and Experimental Intermedia, among other venues.

Corsano has developed an expanded solo music of his own, incorporating sax reeds, violin strings and bows, pot lids and other everyday household items into his drum kit. In February 2006 he released his first solo recording, The Young Cricketer, and toured extensively throughout Europe, the U.S. and Japan. He spent 2007–08 as the drummer on Björk’s Volta world tour. 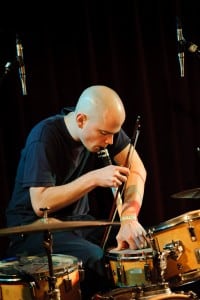 In 2009, Corsano returned focus to his own projects, most notably a duo with Michael Flower, Rangda (with Sir Richard Bishop and Ben Chasny) and solo work, now revamped to include synthesizers and contact microphones in addition to his drum set and homemade acoustic instruments.

There is no cover charge for the show, but donations are requested. Quinn’s is located at 330 Main St. in Beacon. For more information, visit the Quinn’s Facebook page.