At a special session of the Haldane School District’s Board of Education last Tuesday evening (July 28), the five trustees reluctantly decided against going forward with an administrative reorganization plan by Dr. Diana Bowers, the school district’s superintendent, after they had appeared to be supporting it.

The plan, which proposed creating a new position of assistant superintendent for current High School Principal Brian Alm, among other changes, was intended as part of an effort to implement the district’s new strategic plan and also retain the current administrative team by offering them a promotional opportunity, not an easy thing in a small district.

The idea met with significant opposition from several perspectives starting at a public hearing on July 21.

Critics, including both parents and school staff, pushed back on the necessity of an assistant superintendent position in a small school district with only one school each for grades K–12. They pointed to larger districts with no such position. 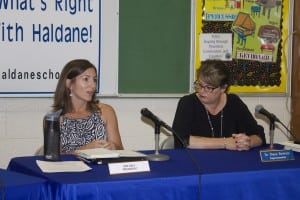 Although the overall plan, including an interim promotion to high school principal for Middle School Principal Julia Sniffen, was characterized as revenue neutral, meaning it would not add to budget expenses, staff and some parents wondered how long that would be true and whether in a tight budget environment management opportunity was ultimately trumping staff opportunities for more money.

Parents and staff concerned about students with special needs expressed specific concern that Alm had no background or training in the special education field and that the inclusion of that policy area, among several others, in his position meant a diminishment of the program’s importance and chances for success.

Although the superintendent and presumably the board thought it was desirable to have the reorganization in place before the start of the school year, the introduction of the plan in July, amid summer’s preoccupations, fanned skepticism and suspicion about the appropriate process.

Despite the superintendent’s attempt to win over opponents and preserve her plan with a series of public “coffee klatch” discussions in the last week, the trustees unanimously concluded, in the words of Jen Daly, board president, “The plan is only great if it’s great for the whole community.”

Daly said positive feedback was heard along the way but that negative comment received the most attention. She did not elaborate on what she meant by “most attention.”

The meeting, held in the Haldane music room, lasted less than a half hour. The trustees, looking like patients in a dental surgery waiting room, all commented on how they had come to this point, taking pains to say they believed the plan was the right way to proceed but that broader public support was needed for success.

“The plan was put together for the right reasons,” offered Peter Henderson, vice president of the board. “But we have to do it together. People aren’t ready for what appears a major disruption. Perhaps it is too much too quickly.”

Evan Schwartz, a school principal, underscored that in his years of experience in attending national conferences, he believed Haldane administrators were among the elite in the country and that a plan to give them incentives and retain them was worth pursuing. But he concluded it appeared to be “too much too fast.”

Trustee Peggy Clements suggested the plan wasn’t communicated effectively, so that no matter how great the board thought it was, it had engendered negative feelings and would not be appreciated if it went forward.

Board Member Margaret Parr addressing the audience said: “This is how it is supposed to work. You heard about it and came out and told us how you felt.” She told the audience to “pat yourselves on the back” for participating during the summer and said the board heard the concerns and realized it had to regroup. Parr also added that there was no intent to sneak the plan through and that it came about only because of the resignation of Jennifer Wilson, former director of special, remedial and assessment services, which gave rise to the larger reorganization idea.

A rueful Bowers joined the board in trying to put the best face on an awkward situation after “a difficult few weeks.” She emphasized the centrality of the five-year strategic plan for changes in curriculum and teaching approaches and that they were just at the beginning of that effort. “The whole purpose of anything we do is to create an environment where kids can learn well … if there was going to be resistance and dissension then we couldn’t go forward.”

Bowers acknowledged that decision making took place in a “democracy” and that more work would be needed to figure out a more acceptable way to achieve her administrative goals. She praised her administrators as well as the Haldane faculty and staff for always “giving 150 percent.”

She proposed to the board that she begin a search for a director of pupil personnel services and innovative education to replace Wilson.

The public in attendance, mostly staff and activist parents, received the board’s course correction in silence and were not asked to comment before the meeting ended.

3 thoughts on “Haldane Board Withdraws Support for Reorg Plan”