Opponents of paving the westernmost stretch of South Mountain Pass took their case to court this week but failed to obtain a temporary restraining order to stop the roadwork.

At a Town Board workshop Wednesday night (July 29), Philipstown Town Supervisor Richard Shea, named as a defendant in the case, along with the whole Town Board, announced the result of the judicial action.

However, the window for further litigation remains open and the town has until Sept. 4 to answer the allegations in the 19-page petition-cum-complaint brought by the plaintiffs, the Old Road Society and like-minded paving adversaries.

In other town business Wednesday, the Town Board adopted new rules for operating outdoor wood-fired furnaces.

Twisting, with steep 10 to 15 percent grades, South Mountain Pass runs diagonally southeast roughly 2 miles from Route 9D, ending at Route 9 in Westchester County slightly beyond the Putnam County–Philipstown border. After weeks of acrimonious public discussion, site visits and deliberations, the Town Board voted unanimously on July 14 to pave a 2,600-foot strip of the road, leading uphill from Route 9D. Amid similarly contentious debate, on June 10 the Town Board approved a 1,310-foot South Mountain Pass drainage project, to be complemented and protected by the paving work. 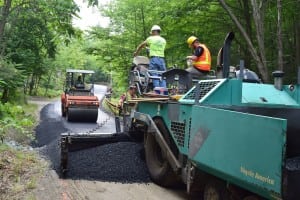 Represented by David K. Gordon, a New Paltz–based lawyer, on Wednesday morning the Old Road Society and its allies went to the state’s Putnam Supreme Court civil division in Carmel, filing their bid to stop the paving by obtaining a temporary restraining order, in a state law Article 78 proceeding. The court called for a hearing under Justice Victor G. Grossman that afternoon.

In the ensuing proceedings, “the judge refused to grant a temporary restraining order, which is a good thing for us,” Shea informed his Town Board colleagues and the public Wednesday night. “We obviously came to the conclusion that this is a good project and it’s going to be a benefit to the entire town.” He and other Town Board members extended thanks to Philipstown Highway Superintendent Roger Chirico, who planned the paving and drainage projects, and Stephen J. Gaba, who represents Philipstown in court and whom Shea described as “a super-sharp person I think we’re really lucky to have” as town attorney.

After the meeting, Shea commented further to The Paper. “I’m glad it’s over, that’s for sure,” he said of the court hearing. He explained that the next step is “to start paving tomorrow [Thursday, July 30]. It was scheduled and then we had to unschedule it” when the court appearance loomed. He again defended the board’s decision to pave. “This project has been voted on by the Town Board. I feel we went through a thorough vetting” of the plans and solicitation of public opinion. “We need to get this done. The project has got a lot of merit.”

Shea expressed hopes that no further trips to court occur and no other obstacles arise. “People need to respect the rule of law,” he said. Citing the virtues of dialogue over lawsuits, he rued situations where “you’re not talking anymore; suddenly you’re in court. That’s the worst possible scenario,” he said.

Old Road Society President Terry Zaleski praised the persistence and intentions of the paving opponents, despite their setback in Carmel. “The South Mountain Pass residents worked hard to have their day in court,” he told The Paper Wednesday night. “Their commitment to this has been noble and they have given it their all. They have worked so hard on this, it’s very impressive. The Old Road Society has stood with them from the start and throughout this proceeding. We are disappointed in the outcome in court, but no one can be faulted for trying to protect what is so important — the character, ambience and value of history to Philipstown.”

Also at its Wednesday session, the Town Board convened a public hearing on restrictions to limit use of wood-fired boilers or furnaces, typically located outside the homes they heat, to the period from Nov. 1 to April 15. No one in the tiny audience opposed the move. A Continental Village resident who did not give his name endorsed the restrictions. “Thank you for doing this,” he said, referring to himself as someone adversely affected by the health-related side effects of such furnaces.

Critics say the mechanisms often have short chimneys, allowing them to blanket adjacent areas, including neighbors’ yards or homes, with dense smoke.

“They put out a lot of particulate, a lot of smoke,” Shea said. “They’re not appropriate in neighborhoods” or for use except in the severe months of winter. “Everyone who’s been next to one of these knows you can’t operate them out of season.” Shea defined the town’s proposal as an effort “to slightly shorten the season.”

After closing the public hearing, the Town Board approved the draft measure, turning it into an official part of the town law code.