“Atten–hut!,” called Danny Valentine, and all 55 junior firefighters stood tall with their shirts still damp with sweat. During the week of July 27, the Junior Firefighter Academy called attention to what it means to be a firefighter.

“We treat them as they would if they were in a career fire academy,” said Valentine, academy director and Cold Spring Fire Company chief. “What they get is a uniform and ID tag, and they learn the importance of teamwork, respect, responsibility, and they get into formation.” 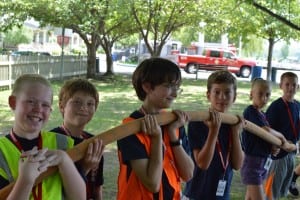 It’s not all running into burning buildings. The academy, now in its 13th year, starts every morning at 9 a.m. with physical training, hence the sweaty shirts. They march in lines, chant slogans and do push-ups. Afterward, they listen to lectures, study procedures, watch demonstrations and practice techniques.

The program is open to fourth- through eighth-graders and put on by the Cold Spring Fire Company and the Philipstown Recreation Department. Donations from the community allow for the campers to attend free of cost. 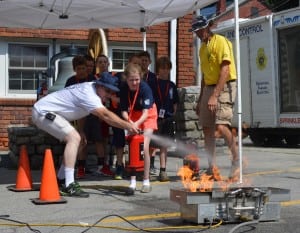 One junior firefighter platoon practices spraying a fire extinguisher at a controlled blaze.

“It teaches me some very important skills, like fire prevention and how to use a fire extinguisher,” said one camper. The academy is essentially an extension of the fire prevention program that local fire departments teach at schools around Philipstown. They expand on the basics of how to act during a fire: “stop, drop and roll,” staying low under smoke, feeling a door before entering.

The weeklong academy/summer camp is pumped full of action. The junior firefighters crawl through a smoke simulation trailer, try on equipment, breathe life into CPR dummies and spray fire extinguishers. A bomb squad, medical helicopter, ladder truck, sheriff’s boat and an arson dog named Daisy all give demonstrations. By the end of the week, most campers earn CPR and first aid certificates. Yet, for Valentine, the ubiquitous values learned at the academy are as valuable as the fire-specific skills. 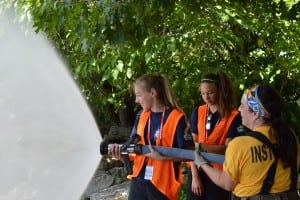 “They have to take care of each other, and the only way to make it through the camp is to work together,” said Valentine. The 55 campers are split into six platoons, each with a platoon leader, squad leader and medic, who take on additional responsibilities and practice being leaders. Each platoon works as a team and shares in the group’s successes and negligence. They are asked to respond with “Yes, Sir” or “No, Sir” and must perform push-ups if they neglect to do so. Such behavior has led to successful careers in and out of the fire service. 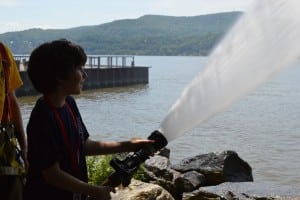 Junior firefighters had the chance to spray real fire hoses into the Hudson River.

According to Valentine, roughly 30 Junior Firefighter Academy graduates have gone on to join departments, in North Highlands, Cold Spring or Garrison. Many of the instructors at the current academy once attended it over the past 13 years.

When asked if they might become firefighters one day, a group of campers holding a fire hose responded positively. One even said, “Yes, Sir.”