In addition, he has served as a law instructor at the police academy, an intelligence officer in the Middle East and India and as an infantry officer in the U.S. Army National Guard. His wife, Sarah Carnevale, has been active in the Haldane community, including running as a candidate in the 2015 school board election. His then 5-year-old son Zane was featured in The Paper in 2013 for his success in “TOUGHkids” triathlons.

The Paper’s Michael Turton recently interviewed del Pozo about his new job, life in Philipstown, the pull of Vermont and more. Responses have been edited and in some cases summarized.

The Paper: Where did you grow up?

The Paper: How did you end up in Philipstown? 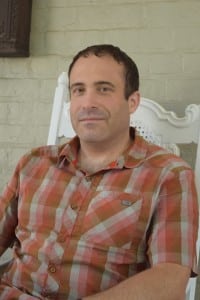 del Pozo: My first visit was a field trip to Breakneck in 1988 as a high school freshman. Even then I knew this was a very special place. I was only 14 but I always had a mind to move here. We got married at the Chalet in 2002, lived in Forge Gate, then moved to Nelsonville in 2004.

The Paper: What led you to study philosophy at Dartmouth?

del Pozo: I always like getting to the heart of the matter — discarding preconceived notions about a topic and trying to draw conclusions based on careful thought.

The Paper: Isn’t it a rather huge leap from philosophy to NYPD cop?

del Pozo: I think not at all. Being a cop means you see a lot of things in life, perspectives you couldn’t get in many other places. You really see what is at stake in everyday life.

The Paper: Eric Garner’s death raised many questions about the NYPD. As a senior member of the department, what was your role after that incident?

del Pozo: The commissioner realized we had to reset how we deal with citizens — to de-escalate situations rather than escalate. I helped develop a training unit on filming — situations where citizens film officers. It’s a good mechanism for accountability and cops shouldn’t be afraid of it.

The Paper: Burlington City Council voted 11-0 to hire you, but there was some vocal public opposition. Was some of that because you were a NYC cop?

del Pozo: I think a lot of it was that I was from New York. An investigative piece on me in Seven Days silenced the opponents. The nation has been doing a lot of soul searching about policing. NYC has the biggest force out there and the NYPD has seen it all — the very best — and some of the worst.

del Pozo: I volunteered. I wanted a change of pace and thought it would be exciting to live in a place I was totally unfamiliar with. NYPD wanted to learn about terrorist attacks there — to see if they exposed vulnerabilities in New York City. I responded to three terrorist attacks — two that actually occurred and one that failed.

The Paper: You’re also an officer in the U.S. Army National Guard; have you ever been called up?

del Pozo: My unit was mobilized after Sept. 11 and stationed at the U.S. Military Academy. West Point was an open base at the time. In the heat of 9/11 there was a worry that the cadets were vulnerable.

The Paper: Burlington has a population of about 42,000, compared to more than eight million residents in NYC. Isn’t going to Burlington a bit like being sent down to the minors?

del Pozo: It’s a less diverse city and the police force is small. But it’s a city that takes the equality of all its residents very seriously. And to be the person responsible for public safety is always a major league job.

The Paper: What major law enforcement issues does Burlington face?

del Pozo: Opiates coming from New York City is one of the biggest problems. I’ve already seen tremendous collaboration between NYPD and Burlington PD to stem that. There’s also a flow of guns from Vermont to New York City.

The Paper: Burlington includes the University of Vermont. What challenges does that pose?

del Pozo: The university has its own police force. It’s a constant quality-of-life battle — students being students and residents sympathizing with that but ultimately wanting some peace and quiet. The fact that I had been commander of the 6th Precinct, which includes NYU, was a very positive factor in me being hired.

The Paper: What are you looking forward to most about Vermont?

del Pozo: The idea that I can live in a place that offers as much in the outdoors as Cold Spring, but with a five-minute commute to work each way, versus travel to the city. Being a cop is the best job I can think of. Leading cops is second best — and being the lead cop in a place like Burlington is too good to pass up.

The Paper: Will you miss NYC?

del Pozo: New York City will always be in my blood no matter where I am. What I love is that it’s a place where someone like my dad can come from Cuba and offer his kid an opportunity to do things like become a cop, travel the world and get a fancy master’s degree. There are not many cities like that. I’ll really miss Grand Central Station — the feeling that I’m at the center of something so immense — yet just a train ride away from this special little community.

The Paper: You’re a Brooklyn guy. What does your favorite pizza look like?

del Pozo: It’s a New York round slice, crispy crust, with nothing on it. It’s all in the quality of the three basic ingredients. There are probably a thousand good spots in NYC. Vermont? I’ll let you know. I’m optimistic.

The Paper: What was the last book you read for fun?

del Pozo: The Emerald Light in the Air by Donald Antrim. Why he was named a MacArthur “Genius” was clear to me after the first few pages, and it changed some of my ideas about prose style after a long bout of Cormac McCarthy.

The Paper: Where do your interests lie, beyond police work?

del Pozo: Videography. There was a domestic violence incident that really made an impression on me. I teamed up with some creative friends to make a film about it. It was shot in the Bronx and is now in post production. Depending how it looks you might see it — or you might not.

The Paper: Last but not least, what will you miss about Cold Spring and Nelsonville?

del Pozo: This is a village in every sense of the word. You really get to know your friends and neighbors in a place like this. I will really miss the community — the passion that people have about living here. But, we’re leaving some family behind; there will always be a reason to come back.

Brandon del Pozo begins his duties as Burlington’s chief of police in September.

One thought on “The Paper Interviews: Brandon del Pozo”