Irene Gloria (Steinman) Young, 80, of Cold Spring, died on July 28, 2015, with great courage and dignity at the New York Presbyterian/Hudson Valley Hospital in Cortlandt Manor after a long illness. 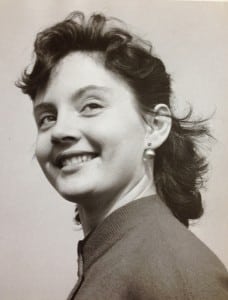 Born in 1934 in Brooklyn, Young was the first-generation American daughter of Estonian immigrants Vilma (Janow) and George Steinman. Raised in Columbia, Connecticut, she graduated in 1958 from Pratt Institute’s prestigious School of Art and Design in Brooklyn, where she majored in illustration and developed her talents in painting and sculpting.

While Young often said her children were her life’s proudest accomplishments, her artwork contributed to many of her children’s proudest moments. She was in demand from their kindergarten through high school years to design and paint play scenery and stage sets, as well as lots of award-winning Halloween costumes.

Young raised her family in New Milford, Connecticut, which she fondly called home for over 50 years, and moved to Cold Spring in her last decade.

She was loving mother to Jennifer Young and her wife, Catherine Polera, of Cold Spring, and Steven Young and his wife, Linda, and loving grandmother to Connor, Corinne and Ryan, all of Ridgefield, Connecticut. She is also survived by her brother, Gary Steinman.

The family would like to express their appreciation to the caring staffs at Northern Westchester Restorative Therapy in Mohegan Lake and New York-Presbyterian/Hudson Valley Hospital in Cortlandt Manor, with extreme gratitude to Dr. Cynthia Ligenza for her wise, compassionate care.

A memorial service will be held at the Episcopal Church of St. Mary-in-the-Highlands (stmaryscoldspring.org), 1 Chestnut St. in Cold Spring, on Sunday, Aug. 30, at 3:30 p.m., followed by a reception at St. Mary’s Parish House.