I am a relatively indiscriminate eater and will try most anything at least once. This surely is the result of a Louisiana upbringing: by the time I was of voting age I had consumed (and I daresay thoroughly enjoyed) my fair share of oysters, crabs, shrimp and crawfish for sure, but had also traveled the more tangential Cajun foodways that led to plates of alligator, squirrel, rattlesnake and even armadillo. (Yes, Virginia, it tastes like pork.)

Further forays found meals of large grub worms (in Nigeria), insects (in Mexico) and a brief and previously acknowledged dalliance with a group of carnivorous NYC gastronauts alternately known as “the Offal Truth” or “the Organization.” (Barbequed Kosher-Uzbecki sweetbreads in Jackson Heights were the highlight of that tour.)

One of my lifetime-favorite “cookbooks” is the late veterinary epidemiologist Calvin Schwabe’s meisterwerk, Unmentionable Cuisine, a scholarly and fundamentally entertaining survey of global culinary taboos that also provides recipes for myriad species of beasts, and nearly all of their body parts and fluids. (Admittedly, there are many dishes in this particular tome even I wouldn’t venture, no matter how entertaining it is. I much prefer to stick closer to Fergus Henderson’s The Whole Beast, an urtext for the nose-to-tail school of contemporary butchery and cooking.)

But mine is not a staunchly carnivorous pursuit — I will happily consume the wild and cultivated fruits, roots, shoots and leaves of the garden, field and forest. Anyone for wild burdock risotto? I’m all in! (Don’t start me talking about mushrooms! For that, come to the mushroom walk I’m doing for the Beacon Institute at Denning’s Point on Aug. 8; visit bire.org/events. It’s chanterelle season, y’all!)

I am certainly not anti-vegetarian or vegan: I am more pro all things in moderation and would venture to say that I consume much less meat or dairy than the national average, preferring the lowly legume as my protein source of choice. I have no ax to grind with tofu (particularly that lovely, silky stuff Marnie Henricksson serves at her Asian-to-Go pop-up at St. Mary’s on Tuesday and Wednesday) and I kind of actually like tempeh (and seitan). But, I find that most vegetarian meat substitutes basically taste like whatever you season them with — just like the squash-zucchini vegetable axis of the garden.

I am truly an omnivore, but foremost I like to know what I’m eating, and as I said, though I do traffic in meat substitutes and protein alternatives, what I can’t understand are meat analogues or simulacra: vegetarian “bacon,” “hot dogs” or “burgers.”

Tofurkey! What is that?!? Can we please call the stuff what it is?

I like food that tastes good and tastes like itself; what it is as it is. Do not obfuscate or confuse the issue — which is why I am a little hesitant proffering this week’s recipe: Faux Gras.

I came to it through former Chez Panisse pastry chef David Lebovitz’s excellent food blog (davidlebovitz.com). Now living the life of an American epicure in Paris, he adapted it from Rebecca Leffler’s Très Green, Très Clean, Très Chic. [This book is subtitled Eat (and Live!) the New French Way with Plant-Based, Gluten-Free Recipes for Every Season, which says to me that the French “get” vegetarian cooking to just about the same degree that they “got” rock ’n’ roll, which is basically not at all, preferring, well, an analogue to what they already had and did very well.]

So while we are ostensibly to enjoy this dish as a simulacrum of foie gras — an ethically admirable and politically correct intention if you like to overthink these things — what we actually have here is a simple pâté of French lentils, sautéed white mushrooms and walnuts.

Ethical politicking aside, such a dish could potentially veer into stereotypical hippie nut-loaf territory — if it weren’t for the herbs, lemon juice and especially the optional splash of cognac (an obvious and stereotypical Gallic nod to foie gras).

(I do applaud the proto-hippie inclusion of soy sauce/Tamari over salt for its absolute umami qualities, which also reinforces Mark Bittman’s recent appreciation of soy sauce and butter as a gustatory match made in heaven that is greater than the sum of its parts. That said, for the strict vegans in the crowd, for all it adds, I don’t think the absence of butter would drastically impact the overall taste.) 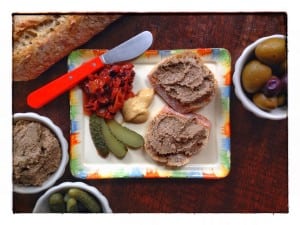 This preparation is also unbelievably quick and easy (basically a quick spin in the food processor) save for cooking the lentils — and even they are relatively fast and easy. (If you’re smart, you’ll make a double or even triple batch to keep in the refrigerator for quick, cold summer salads, especially now that the summer tomatoes are here.)

And what we actually have here is a very tasty pâté — a wondrous thing in itself and not particularly faux anything.

I have prepared this recipe for three separate groups of unsuspecting gourmands, challenging them to guess its makeup, and although some have called it, this is not the point: In all three instances the pot was, as they say, licked clean.

Serve it on crackers or a crusty bread; it works well with the traditional accompaniments of its nominal French analogue — cornichons, fruit pastes, onion or shallot marmalade. (It is pictured here with some of the last Small Good Things’ Sour Cherry Chutney.) It is an excellent addition and complement to a cheese or charcuterie plate, and I’m told that it goes well with big red wines, a nice rosé or craft beers.

Or have it with your kale-spinach-brewer’s-yeast bomb.

I just had some on a baguette with a couple of slices of heirloom tomato and fresh basil and would gladly do that again in a second.

Heat oil and butter in a skillet; add onions and garlic and cook, stirring frequently, until translucent, about 5 to 6 minutes. Add mushrooms, stirring until cooked through, about 5 to 8 minutes. Remove from heat.

Scrape pâté into a small bowl and refrigerate until firm. Serve with crackers, hearty bread or small toasts. Pâté will keep for four days in the refrigerator. It can frozen for up to two months, well wrapped.