After summer-blooming perennials have finished their cycle, they can be divided and moved.

Mow the lawn with the blades set at 3 inches or higher when the conditions are hot and dry. It helps the lawn recover.

Check mulch to make sure it hasn’t decomposed. Add new mulch so that plants can hold in water more efficiently on hot days.

Be vigilant for signs of pathogen infections on plants, especially tomatoes. Late blight has been reported in 11 counties in New York and also in New Jersey and Connecticut. Remove any diseased material and do not compost it.

Now is a good time to dry herbs for winter use.

Plant fall vegetables like lettuce, spinach, carrots, kale and many others that will tolerate cooler temperatures.

Start looking around for discounted prices on perennials, trees and shrubs at plant nurseries and landscape centers. The longer you wait, the deeper the discount, but there will be less of a selection.

Start planning for next year. Take photos of the garden at its summer peak and consider any changes you want to make.

It’s the season for Asian long-horned beetles to emerge in maturity, and the Department of Environmental Conservation is seeking assistance in spotting them. Through Aug. 30, the DEC would like people to take photos of beetles they think are ALBs and to email the images to [email protected]

In previous years, the DEC has successfully identified potential infestations that needed to be controlled. Jessica Cancelliere, research scientist in the Division of Lands and Forests of the DEC, said: “To date, the survey has resulted in the discovery of one new infestation on Long Island in 2013, where 600 infested trees were found. That was throughout the Babylon Township in Suffolk County.”

Asian long-horned beetles have been found in Illinois, Ohio, Massachusetts, New Jersey and New York and eradicated in many instances. It is native to China, Japan and Korea and was first discovered in New York almost 20 years ago. The larvae feed on chestnut and three types of maple trees — Norway, silver and sugar. The larvae’s feeding basically girdles the tree, a process that cuts off the tree’s ability to get sustenance by cutting through the xylem and phloem. The tree weakens, loses branches and dies.

Tens of thousands of trees have been cut down in an effort to control the spread of the beetle and to eradicate it. Cancelliere said: “Long Island and New York City are big hot spots, as well as the lower Hudson Valley (because of its proximity). There is a huge infestation in Worcester, Massachusetts, that also poses a threat to us.” The DEC is primarily concerned that it could move into the Catskills or Adirondack mountains, where it would decimate hardwood forests. The United States Department of Agriculture is currently trying to eradicate it from the infestation found in 2013.

Cancelliere said that they receive about 300 responses every year, and one call already this summer has her concerned about a possible infestation in another area of Long Island. 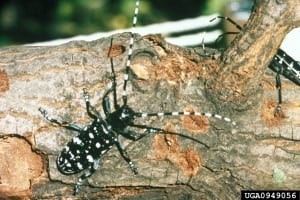 An Asian long-horned beetle adult is easily spotted in a pool filter at this time of year.

The Asian long-horned beetle looks similar to the native white-spotted sawyer beetle. They are roughly the same size, about 2 inches long, and both have long antennae. Although they are both black, the Asian beetle is shiny and smooth, while the native beetle is bronze-black and has a single white dot. The DEC wants people to bag and freeze any suspected specimens for positive identification. Don’t let it get away.

The beetles arrive when goods are shipped to the U.S. from overseas; they are effective hitchhikers. Even though ports have protocols, they are small bugs, and some escape detection. Cancelliere said, “As we have learned from other forest pests such as the emerald ash borer, infestations can pop up anywhere, anytime, because people move firewood all over the place.”

The DEC regulations state that firewood shouldn’t be moved more than 50 miles from its source, and there are towns in restricted zones throughout the state, including Peekskill, where firewood regulations are tighter because of infestations of the emerald ash borer.

Whether you’re a pool owner or just a tree lover, be the “eyes in the forest” and help stop the spread of this dangerous pest. For more information, check the DEC’s website and the USDA site, which also has materials for educators to use with the children.